Accessibility links
WikiLeaks Fallout: Unease Over Web Press Freedoms In the wake of the dump of classified diplomatic cables, private companies have cut off services to WikiLeaks, prompting its supporters to retaliate with apparent cyberattacks. The developments reveal a surprising fragility in publishing on the Internet and raise new First Amendment concerns. 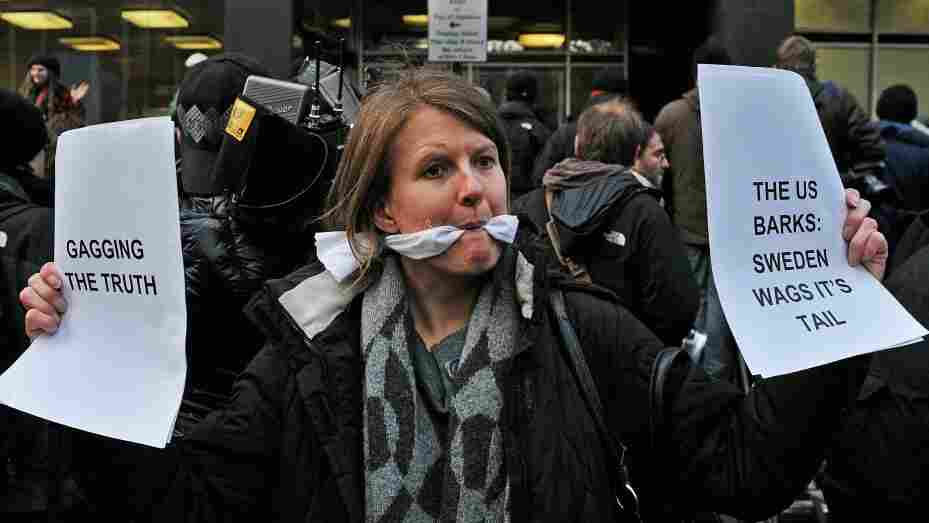 A gagged demonstrator holds placards during a protest Tuesday over the arrest of the WikiLeaks founder Julian Assange, outside the magistrates' court in  London. Assange is facing possible extradition to Sweden on sex charges and may face extradition to the U.S. on espionage charges. Carl de Souza/AFP/Getty Images hide caption

The legal and political troubles that WikiLeaks has encountered since publishing thousands of State Department cables in recent weeks may have troubling implications for more traditional media outlets, advocates of free Internet expression warn.

WikiLeaks founder Julian Assange is sitting in a British jail, facing possible extradition to Sweden on sex charges -- and, potentially, extradition to the U.S. on espionage charges as well.

Before Assange's arrest, WikiLeaks saw several companies it counted on to handle its publishing needs and financial transactions cut off their services, including Amazon, MasterCard, PayPal and EveryDNS.net, an Internet-hosting provider based in New Hampshire. 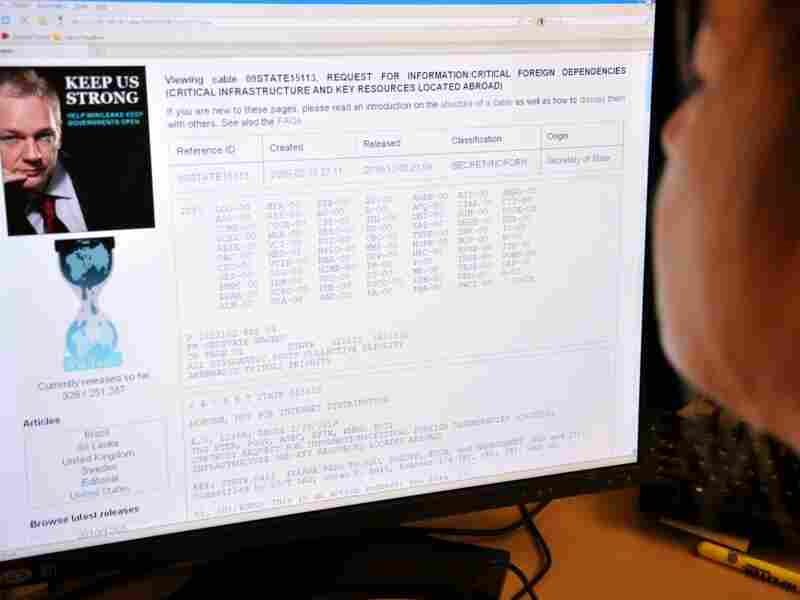 A woman in Washington, D.C., reads a WikiLeaks page. The legal and political troubles that WikiLeaks has encountered since publishing thousands of State Department cables may have troubling implications for information delivery and journalism on the Internet. Karen Bleier/AFP/Getty Images hide caption

"In the information age, everybody depends on intermediaries in one form or another," says Marcia Hoffmann, a senior staff attorney with the Electronic Frontier Foundation, a civil rights advocacy group.

Supporters of WikiLeaks have since launched their own protests in retaliation against the companies that abandoned the online site, including an apparent cyberattack against MasterCard.com on Wednesday.

Companies such as MasterCard have "a First Amendment right" to decide who they will and will not do business with, Hoffmann says. Still, she and other observers are troubled by the implications of private companies deciding to cut off services to an organization that publishes controversial material.

"We expect a tremendous backlash against WikiLeaks that will end up affecting whole other entities," Hoffmann says. "It's going to be a real threat to news organizations and others who publish online."

The backlash against WikiLeaks has already started. A bipartisan group of senators introduced legislation last week, the SHIELD Act, which would make it illegal to publish the names of U.S. military and intelligence informants.

Prosecuting WikiLeaks: It's Not Going To Be Easy

"The senator believes that Amazon, PayPal, Visa and other businesses that severed their ties with, and therefore their services to, WikiLeaks have done the right thing and acted as good corporate citizens."

Don't Throw Out The Standards

James Jay Carafano, the deputy director of the Institute for International Studies at the Heritage Foundation, a conservative think tank, says the fact that private companies are shutting off services to WikiLeaks is a demonstration of "the wisdom of crowds."

WikiLeaks stepped over the line in publishing classified documents, he says, and ultimately should be held accountable. "You have to realize, this notion that cyberspace is this ungoverned space is simply not true," Carafano says.

Carafano argues that WikiLeaks handled sensitive material without sufficient sensitivity. WikiLeaks does not vet the material it releases with the same care that its major media partners, such as The New York Times, typically demonstrate, such as redacting parts of some leaked documents.

The 'Wild West Of Media'

"What we have now is a Wild West of media," says Dvorkin, who teaches journalism at the University of Toronto. "We have part of the media operating in a responsible manner and others doing whatever they think necessary."

Dvorkin believes that Assange has acted in a "childish and irresponsible" manner. Nevertheless, he shares the concerns of civil libertarians about what Assange himself calls the "privatization of state censorship."

"The big immediate danger for all of us now is an overreaction by legislators or governments -- or Internet service providers who are worried about lawsuits," Dvorkin says.

A New Sense Of Fragility

The Internet service providers and other companies who have ended their contracts with WikiLeaks say they did so because WikiLeaks violated their terms of services, not due to any outside pressure from governments.

Still, their decision to cut off services demonstrates the fragility of freedom of expression on the Internet.

It's not like owning your own printing press. And the private companies that offer Internet services do not necessarily view freedom of expression as part of their core mission.

"They don't see themselves as having an information-dissemination mission," says Susan Crawford, a professor at Cardozo Law School and former adviser to President Obama on Internet policy issues.

"They will cooperate very easily with a phone call from someone in power," Crawford says, "and there is no upside for them in continuing to serve WikiLeaks."

U.S. courts have maintained that news organizations may publish government documents, even if the documents were obtained illegally.

The most famous decision in this regard came from the Supreme Court in 1971, when it upheld the right of The New York Times to print the Pentagon Papers, which were volumes of secret documents about the history of U.S. involvement in Vietnam.

Electronic publishers have enjoyed the same protections as traditional publishers -- and other ones as well, says Marc Rotenberg, president of the Electronic Privacy Information Center, another online civil liberties group.

"We have always understood that Internet-based firms were entitled to even greater protection than traditional print publication, because they have little if any say over the content that their customers might provide," Rotenberg says.

"Following the Pentagon Papers analogy, it is interesting to consider that U.S. firms with even more legal protection than The New York Times had now seem less willing to provide access to controversial material."

It Can't Be Stopped

But even if some private companies have shown themselves lately to be less than perfect stewards of press freedoms, and thus revealed potential problems for other electronic media outlets, it's the nature of the Internet that stifling information is, ultimately, almost impossible.

Already, hundreds of other websites are "mirroring" WikiLeaks content, making it accessible even if the site gets taken down.

"It's too late to put the toothpaste back in the tube," says Crawford, the Cardozo professor. "Whistle-blowers will put information online in some form, in social media, even if WikiLeaks finds it impossible to continue."