Accessibility links
Dives To Gulf Seafloor Turn Up Sea Life Near Well Far offshore the Gulf of Mexico, scientists aboard a deep-sea submarine are studying the impact of the BP oil spill on sea life. They're especially interested in more than 1,000 biological hot spots and what the oil might do to them.

Scientists have been diving in the Gulf of Mexico on a miniature submarine to see how the ecosystems there are coping with the BP oil spill. The expedition gradually edged toward ground zero -- the BP wellhead.

Looking for robust sea life in the Gulf isn't as odd as it may seem. From the coast of Louisiana, the Gulf of Mexico may seem like a muddy sea sacrificed to the thirst for oil and gas. But that's not the case when you get far offshore. The waters there turn crystal clear. And, in places, marine life thrives on the seafloor.

In November, the three-person Alvin dived almost every day from the stern of the research vessel Atlantis, which sails from the Woods Hole Oceanographic Institution.

Each day, as the Alvin came back onboard, scientists huddled around its collection basket to see the day's haul. On one dive Thanksgiving week, the Alvin returned with plexiglass cylinders filled with mud from the bottom, strange, red rock samples, and seawater in special pressure vessels.

Dives To An Underwater Lake 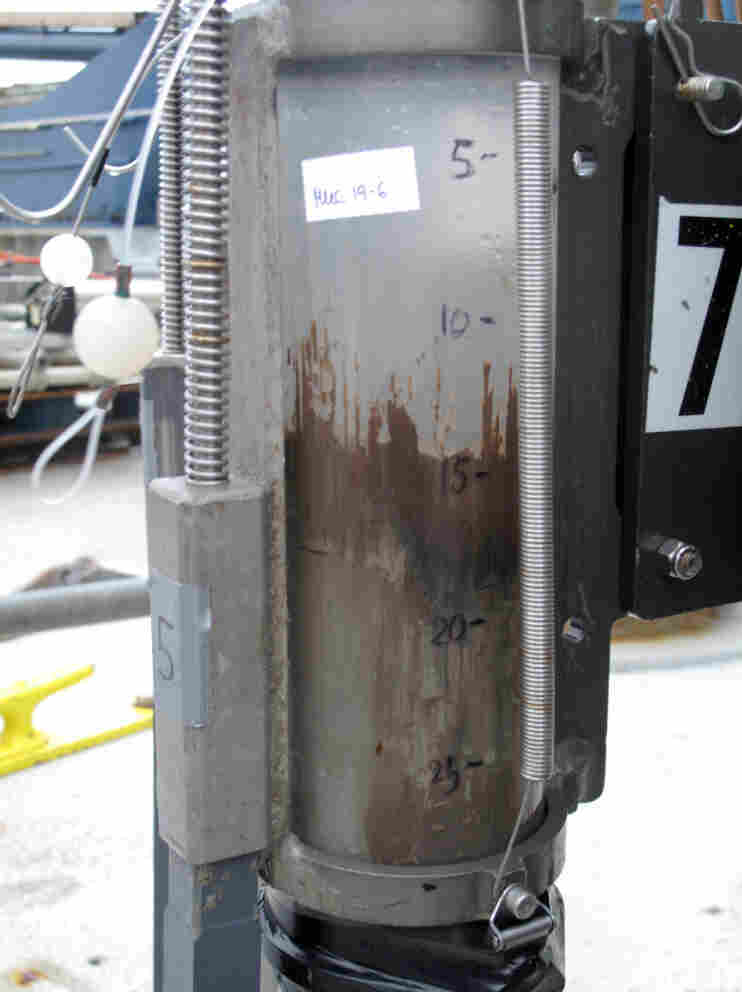 A sample of the seafloor taken about two miles from the Macondo well. A brown layer of oily material makes up the top section of the core. This sample is representative of seafloor samples taken following the oil spill. Richard Harris/NPR hide caption 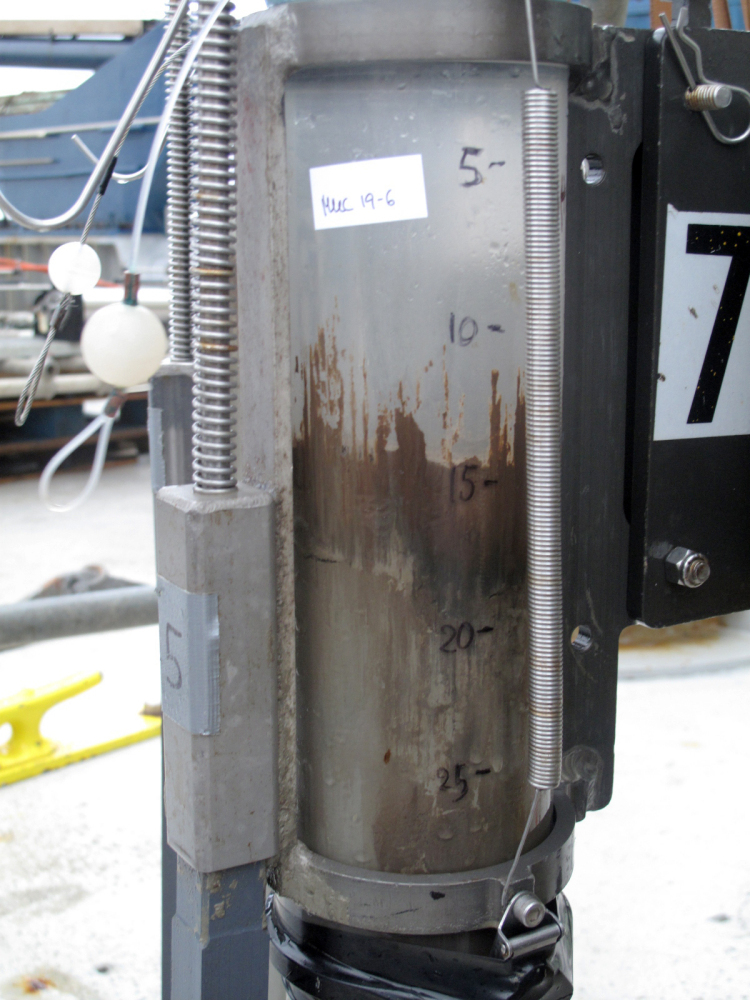 A sample of the seafloor taken about two miles from the Macondo well. A brown layer of oily material makes up the top section of the core. This sample is representative of seafloor samples taken following the oil spill.

Andreas Teske, a professor of marine sciences at the University of North Carolina, Chapel Hill, looks appreciatively at the day's treasure and declares that it is one of the best dives of the entire expedition.

He describes a habitat you would never expect to find nearly a mile under the sea: mussel beds, orange and white bacterial carpets that spread across the seafloor, along with the more predictable fish, shrimp and sea cucumbers. Strikingly, they were all arrayed around an underwater lake -- a lake on the seafloor made up of supersalty water called brine.

"You could see the surface of the brine pool just like the surface of a garden pond, totally clear," Teske says. "And in the brine pond, some animals that fell in [got] pickled -- some crabs and others. So once they fall in, if they don't manage to climb out quickly, that's it!"

As a result, scientists dubbed this spot Dead Crab Lake.

Expedition leader Samantha Joye, a marine sciences professor at the University of Georgia, learned about this rich and otherworldly habitat some 15 years ago when she took her first deep dive in the Gulf.

"I had never heard of such things; I had never really imagined they existed," she says. "It was a pretty spectacular first dive. It was a little lake you could have walked around with your dog, but it was under 1,600 feet of water." 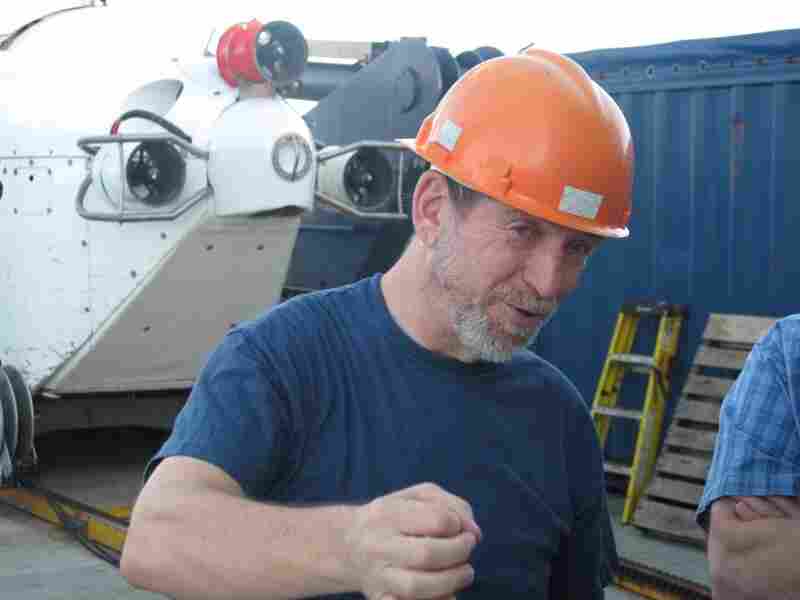 Ian MacDonald, a researcher from Florida State University, says that in many sites in the Gulf of Mexico, animals thrive near natural oil seeps. But he says the ecosystems are not evolved to deal with the vast amount of oil that spilled from the BP well. Richard Harris/NPR hide caption

This spot, about 20 miles from the BP oil well, seemed to be out of harm's way. But Joye says there are more than 1,000 biological hot spots like this in the Gulf of Mexico. And she's here to figure out what the oil spill might do to them.

The next day, she and colleague Ian MacDonald from Florida State University emerge from the Alvin talking about an even stranger place -- where oil and gas seep naturally from the seabed.

They excitedly review screenshots of their high-definition video. Joye says they saw worms that actually live in ice made from frozen methane and water. The worms didn't seem to mind being slathered with crude oil from the natural seepage.

"We actually got footage of a crab chomping on what we think are ice worms," Joye says. "It was just mind-boggling. I've never seen an invertebrate living in crude oil. But these guys were living in the crude oil, just as happy as could be."

Scientists have known about natural oil seeps in the Gulf of Mexico for many years. MacDonald says this one is among the most active. "So here's a site like this that's been saturated in oil for 20,000 years probably, where the ecology, the organisms, the microbiology is completely adapted to dealing with this oil," he says.

But MacDonald adds that this seep is putting out only about one barrel of oil a day. Compare that with an estimated 60,000 barrels a day from the Macondo well.

MacDonald says the natural ecosystems are not evolved to deal with that vast amount of oil, which rained down on hundreds of square miles of the Gulf of Mexico.

"What happens to the natural ecosystem?" he asks. "How does that respond? How do the organisms cope with that?"

To answer those questions, the scientists will need to dive closer to the wellhead. And Joye will get to see for herself on her next trip on the Alvin.

Thursday on All Things Considered, Richard Harris dives with Samantha Joye to the bottom of the Gulf aboard the Alvin.