Accessibility links
High Court Weighs 2007 Arizona Immigration Law The U.S. Supreme Court heard arguments Wednesday in a case testing the legality of an Arizona law that imposes harsh penalties on businesses that knowingly hire illegal workers. And while the justices seemed inclined to uphold part of the law, there didn't seem to be five votes to uphold the law in its entirety. 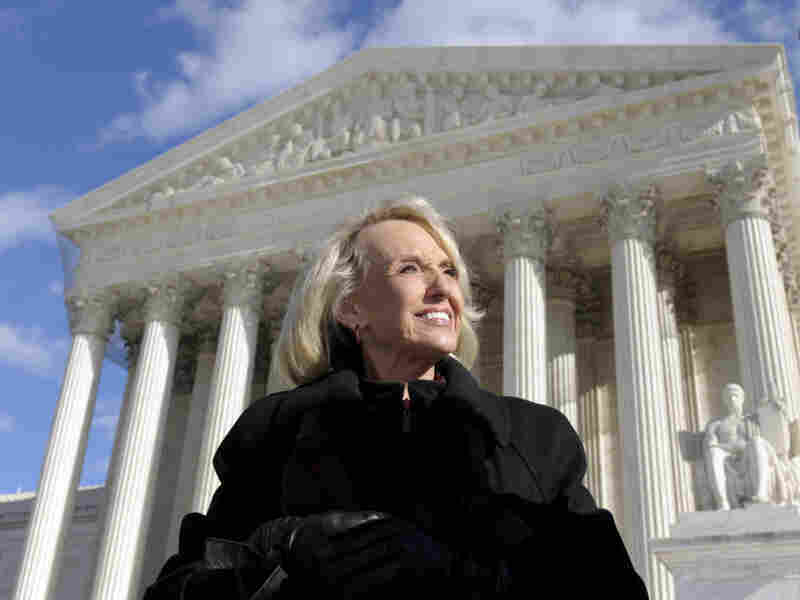 Arizona Gov. Jan Brewer stands outside the Supreme Court in Washington on Wednesday. She defended the state's immigration law, declaring that Arizona had acted to deal with "a crisis" on its borders. Susan Walsh/AP hide caption

The U.S. Supreme Court heard arguments Wednesday in a case testing the legality of a 2007 Arizona immigration law. And while the justices seemed inclined to uphold part of the law, there didn't seem to be five votes to uphold the law in its entirety.

But an alliance of business and civil rights groups challenged the Arizona law in court, contending the state statute is pre-empted by a long-standing federal law that makes the federal government the exclusive enforcer of immigration violations.

Arizona relies on a caveat in the federal law that left intact state licensing provisions. The state has interpreted that caveat broadly, enacting a statute that allows state and local prosecutors to investigate and punish companies for immigration violations by taking away their licenses to do business.

'If We Giveth, We Can Taketh Away'

On the steps of the Supreme Court on Wednesday, Arizona Gov. Jan Brewer defended the law, declaring that the state had acted to deal with "a crisis" on its borders.

"We do issue licenses," she told reporters, "and if we giveth, we can taketh away."

But Carter Phillips, representing the Chamber of Commerce, disagreed. "You can call this a licensing scheme if you want, but it is an enforcement scheme."

Inside the courtroom, Phillips ran into a buzz saw with that argument when Justice Anthony Kennedy remarked, "I see no limitation on what a state can decide is a license."

Phillips responded that it "seems to me quite remarkable to think that Congress intended, through a parenthetical ... to allow the state to adopt an entire alternative shadow enforcement mechanism."

A Focus On Adjudication

Lawyer Phillips contended, though, that Arizona's law is not a traditional licensing statute because it allows the state to strip a business of the right to do business after the state finds a second immigration offense.

Justice Sonia Sotomayor entered the fray: "You don't disagree that ... if someone violated the federal law by hiring an illegal alien ... that the state can revoke their license?"

Phillips agreed with that, prompting Sotomayor to observe that what Phillips really was objecting to was not putting a company out of business, but the adjudication process beforehand.

Phillips said yes, that Congress, in enacting the federal law, specifically said adjudication should be uniform and federal.

Justice Samuel Alito followed up, asking, "Doesn't the exception for licensing mean that this isn't going to be completely uniform?" After all, he pointed out, in one state, a restaurant found guilty of hiring illegal immigrants may lose its license, but it would not lose it in another.

Justices Kennedy and Ruth Bader Ginsburg asked why Congress would have created a regimen of fines and yet allowed the states to put companies out of business for a second hiring offense.

Scalia leaped in to help O'Grady, suggesting that perhaps Congress never imagined that the federal law would not be enforced.

Justice Stephen Breyer, exasperated, said the main reason Congress created this scheme was to give employers an equal incentive to avoid hiring illegal immigrants and to avoid discriminating against people who look foreign or have accents. But, said Breyer, "Arizona comes along and says, 'I'll tell you what, if you discriminate, you know what happens to you? Nothing.  But if you hire an illegal immigrant, your business is dead.' "

Breyer then pointed to another provision of the Arizona law that he suggested undercuts the federal law. He noted that under federal law, if the employer checks an employee's Social Security card and driver's license, the employer is "home free" -- he can't be prosecuted. But under Arizona's law, he's not. The state has a different regimen. The employer has to use the federal database called E-Verify, and if he doesn't, he still can be prosecuted. That worried Breyer. He noted that Congress has repeatedly refused to mandate E-Verify because the system is "wrong" 20 percent of the time. In other words, the system erroneously says someone is in the country illegally a large percentage of the time.

Ginsburg observed that the database is a federal resource, and the federal government says it's voluntary. How, she wondered, can the state make such a voluntary resource mandatory?

Kennedy agreed, saying, "It seems to me this is almost a classic example of the state doing something that is inconsistent with a federal requirement."

That point is important. The state's law is based on the mandatory use of E-Verify, so if the court were to strike down that portion of the law but uphold the licensing provision, the state's victory would be hollow.

Getting a clear decision on all this, however, could be problematic. The case will be decided by an eight-justice court because Justice Elena Kagan is recused from this particular case. So, if the court splits 4-4 on E-Verify, for example, the lower court judgment would automatically stand, upholding the Arizona law.

At least until a full nine-member court hears one of the other cases now waiting in the wings to test the same question.