Accessibility links
For Some Girls, The Ultimate Goal Is To Kill A Buck Magan Hebert, 15, smashes the stereotype of a typical camouflage-wearing, gun-toting hunter. "Some guys think, 'OK, well, you're a girl, you can't kill a deer,' " the high school cheerleader says. "I can say, 'Yeah, I've killed two of them. What now?' " 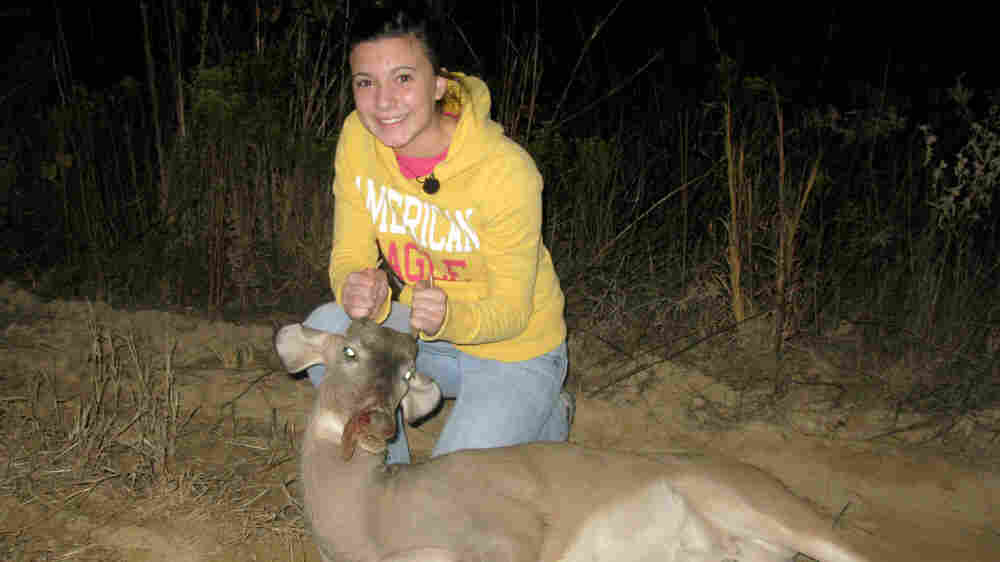 Magan Hebert, 15, poses with the young buck, or "spike," that she shot in Waynesboro, Miss., in November. Magan has been hunting since she was in the fourth grade. Tamara Keith/NPR hide caption 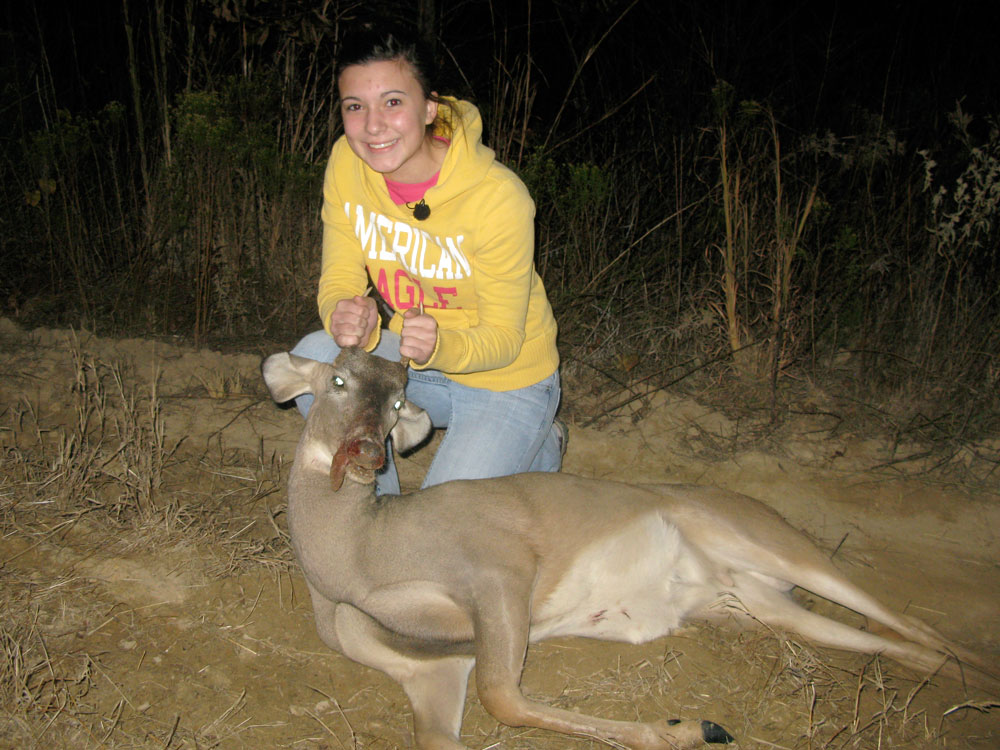 Magan Hebert, 15, poses with the young buck, or "spike," that she shot in Waynesboro, Miss., in November. Magan has been hunting since she was in the fourth grade.

Looking at Magan Hebert in her orange-and-blue cheerleading uniform, you'd never guess that she could shoot a rifle and kill a deer with a single shot.

Her hair is teased up and pinned back into a pouf. Her cheekbones and eyelids are defined with bold, colorful sweeps of makeup.

Magan, 15, of Wayne County, Miss., defies the typical image of a hunter -- a man wearing camouflage, holding a gun.

But an increasing number of girls now hunt. According to the latest data from the U.S. Fish and Wildlife Service, there are some 300,000 female hunters under the age of 16. From 1991 to 2006, the number of girls who hunt in this country nearly doubled.

On a recent Saturday morning, Magan is headed to a cheerleading competition at her high school in Waynesboro. She sings along with the car stereo on the drive over. 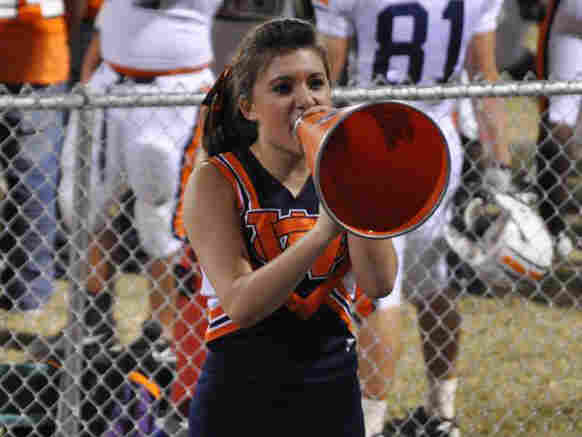 Magan, especially in her cheerleading uniform, defies the typical image of a hunter. Courtesy of Marcy Hebert hide caption 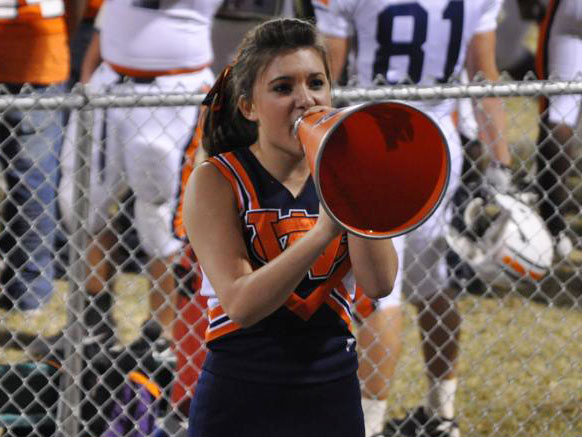 Magan, especially in her cheerleading uniform, defies the typical image of a hunter.

Magan is tiny -- one of the girls at the top of the pyramid who flips through the air like a rag doll. And on this day, she lands every stunt. But the team comes in second place out of two. Magan is quiet on the drive home. Maybe she'll have better luck hunting deer on Sunday.

Magan started hunting when she was in the fourth grade. Her dad hunts every spare minute he can get.

"He would ask, like, every time he went if we wanted to go," she says, reflecting on how she got into hunting. "One time I was like, 'Yeah, I want to go.' I just thought it would be pretty cool, you know, and I just loved it."

For Magan's mom, Marcy Hebert, it was a bit of a surprise that her little girl wanted to hunt.

"She wanted to do it, as a matter of fact, before my son did," Marcy says. "Of course, a lot of the girls up here hunt."

It took a year of hunting before Magan killed her first deer. It was a doe.

"I started shaking when I put the gun up, so [Dad] had to hold it steady for me," Magan says.

But she did it. She hit the doe in the shoulder. Marcy couldn't believe it. Magan was hooked.

"I just like the peace and quiet," Magan says, explaining the appeal.

She says she likes it when she sees a mother deer playing with her fawns. "I think it's cute. 'Cause, you know, you can't kill them yet. But when they grow up, it's really good food. I don't know. I just like it."

The family gets almost all the red meat it needs for a whole year during hunting season.

It's still way before dawn and freezing cold when Magan and Marcy load into the truck and head out to the spot where the family hunts. It's in a private, wooded area. They have a stand -- a small, slightly elevated shack with slits for windows. There's a feeder off in the distance that occasionally spreads corn and protein pellets on the ground.

Among hunters, baiting is controversial. It's illegal in some states but standard practice in Mississippi.

Marcy lights a propane camp heater inside the stand, but it's still cold. 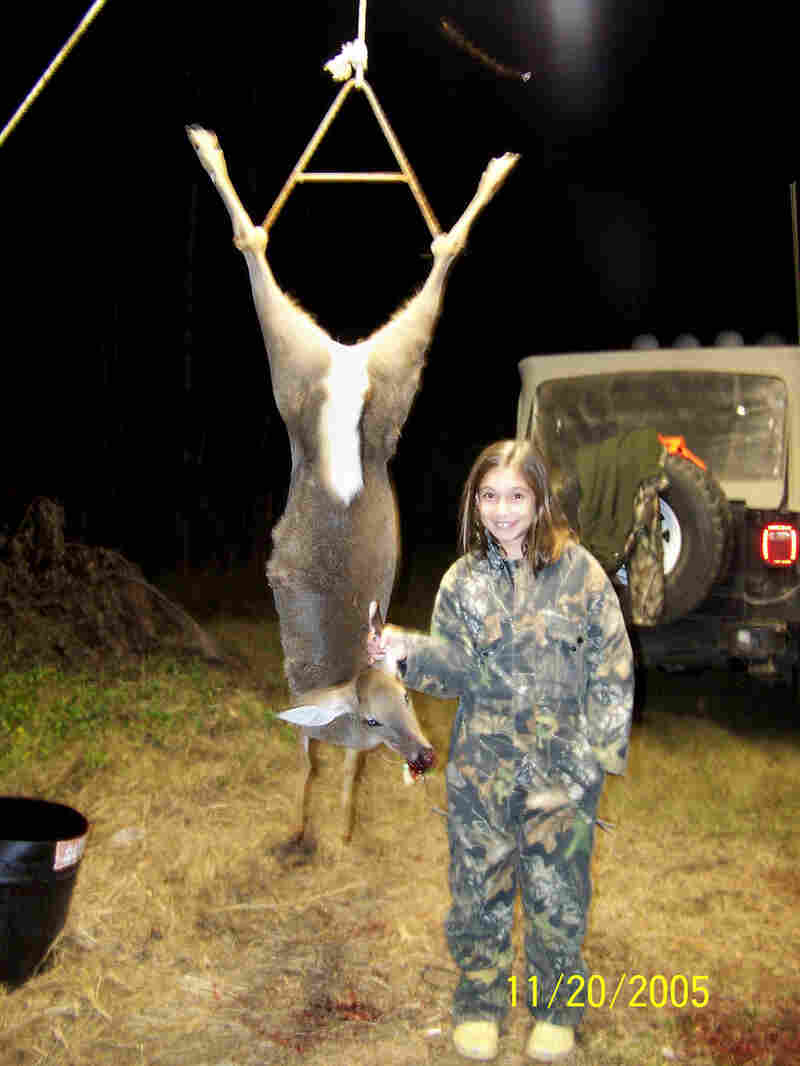 Magan killed her first deer when she was 10. Courtesy of Marcy Hebert hide caption

The sun is rising in the sky. The frost is melting off the grass. Magan and Marcy haven't seen a thing.

Magan flips open her phone and updates her Facebook status: "Sittin' in the stand, freezin', waitin' for the deer to come out," she taps out on the small keys.

She's texting, too, and occasionally nodding off. And Marcy says this is how it goes: sitting side by side in the quiet, staring out at trees and grass, hoping to see a deer and breaking the boredom with text messages.

"A lot of times we'd text back and forth, sitting in the stand," Marcy says. "That's how I learned how to text, was sitting in a deer stand with her."

They go back to the house empty-handed, and Magan's little brother is gloating. He has killed a deer -- his second one of the weekend.

"Like, every time he goes hunting -- almost every time -- he kills something," Magan says, clearly a little bit jealous.

It's been five years since the last time she got one. That's partly because she hasn't had as much time to hunt now that she's on the varsity cheerleading squad. But partly, it's luck: catching the right deer, walking into the right spot at the right time.

In the afternoon, they go back out, hoping for that buck. They wait and wait. And then, "Shhhh," Marcy says as she spots a deer. "It's a spike."

A spike, a young buck, walks into a clearing near the feeder. He's about 120 pounds, with just two small antlers. Magan starts texting excitedly.

"You'd better put the phone down and put the gun up," Marcy whispers firmly.

Magan picks up the gun and releases the safety. She is tense. She takes several deep breaths as she gets the deer in her sight.

There's a long silence. Then a single gunshot. The sound reverberates around the stand. 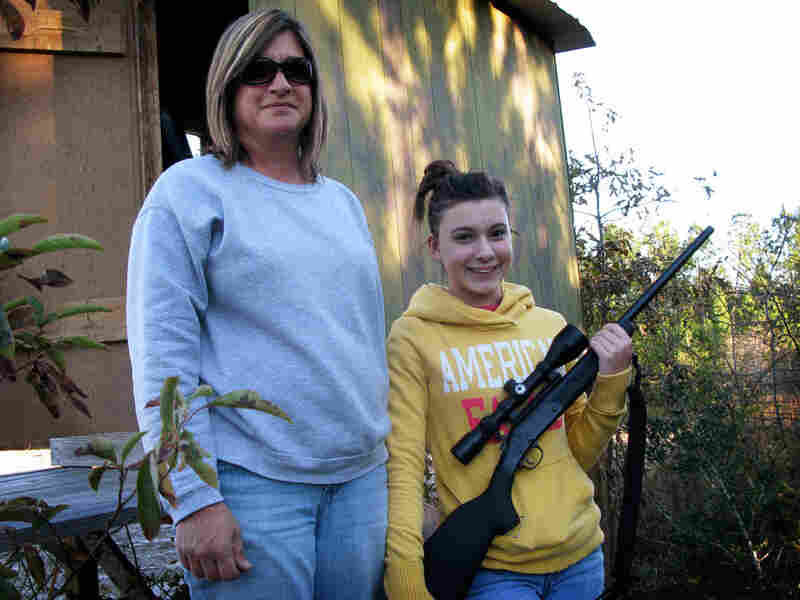 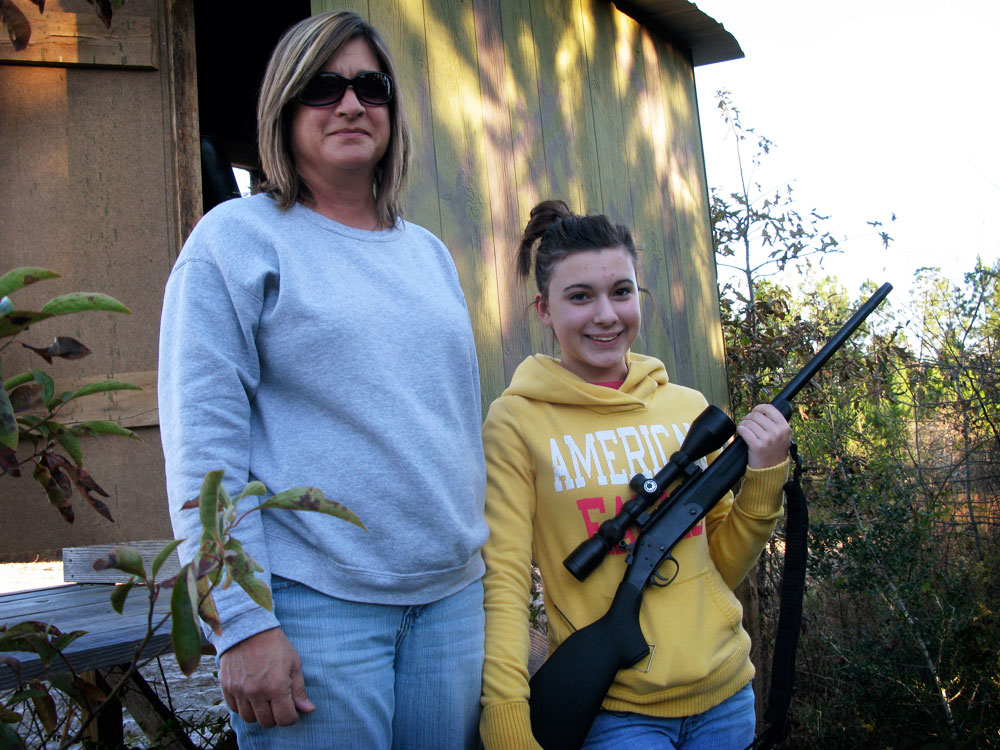 Magan's mother, Marcy Hebert, says Magan was interested in hunting before her brother was.

The deer runs about 50 feet before collapsing. The shot is clean, and fatal, just behind the front leg. Magan has her buck.

Mother and daughter come out of hiding in the deer stand, grab the lifeless spike by the legs and hoist him into the back of the truck. It takes all the strength they have to get it in. They close the truck gate and drive home.

There are bragging rights in the bed of that truck -- and there's venison. Within the hour, Magan's dad will butcher the deer, filling a cooler with the meat.