Accessibility links
Officials Worry About Some Latino Converts To Islam Counterterrorism officials are trying to understand why Latino converts to Islam have been connected to terrorism cases in this country with increasing frequency. In the most recent case, a 21-year-old man was charged Wednesday with plotting to blow up a military recruitment center. 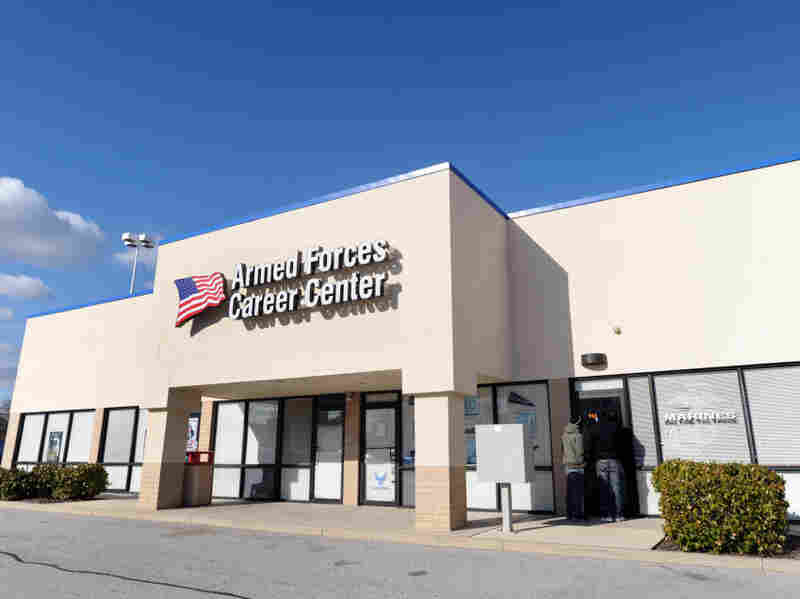 The FBI arrested Antonio Martinez, a 21-year-old Muslim convert, on Wednesday and charged him with plotting to blow up this military recruitment center in Catonsville, Md. Steve Ruark/AP hide caption

The FBI arrested Antonio Martinez, a 21-year-old Muslim convert, Wednesday and charged him with plotting to blow up a military recruitment center. There are two things about this case that make it particularly interesting to counterterrorism officials. The first is that Martinez appears to have been radicalized in the U.S. The second is that he is Latino. Latino converts to radical Islam have been connected to terrorism cases in this country with increasing frequency -- and officials are trying to understand why.

The FBI began tracking Martinez, who also went by the name Muhammad Hussain, in October. That's when, according to the criminal complaint against him, Martinez allegedly struck up a conversation with an FBI source and told him that he wanted to attack U.S. military personnel.

Martinez allegedly believed that the U.S. had long been at war with Muslims, and he said that Muslim brothers needed to strike back. After taping hours of Martinez's conversations, the FBI ended up providing him with what he thought was a car bomb. He allegedly parked it outside an armed forces recruiting station in Catonsville, Md., on Wednesday and was arrested after he allegedly tried to detonate it.

The explosives were inert and no one, Justice Department officials said, was ever in any danger. While there is already some discussion about Martinez having been entrapped by a terrorism sting operation launched by the FBI, officials say to concentrate on that misses another wrinkle in the case: Why do a small number of Latinos in this country seem to convert not just to Islam but to a radical form of it?

"In some ways, it is not the volume [of conversion] necessarily. It is not like folks are worried about vast communities or subcommunities of Latinos joining al-Qaida," said Juan Zarate, a former deputy national security adviser in the Bush administration who is now with the Center for Strategic and International Studies. "What has got people's attention is the nature of individuals who have been caught in this web."

In some ways, it is not the volume [of conversion] necessarily. It is not like folks are worried about vast communities or subcommunities of Latinos joining al-Qaida. What has got people's attention is the nature of individuals who have been caught in this web.

The individuals involved have been at the center of what terrorism officials consider important cases. There is Jose Padilla, the former Chicago native who pleaded guilty to training with al-Qaida; or Daniel Maldonado, a Latino-American who was one of the first U.S. citizens to join an al-Qaida affiliate group in Somalia. Officials also point to Bryant Neal Vinas, a Latino from Long Island who found himself in al-Qaida's inner circle a couple of years ago. He talked to the group's leadership about how to attack the Long Island Rail Road and, according to officials close to the case, "has been a gold mine of information about al-Qaida ever since."

"It's both the nature of these individuals but also their case studies, the substantive dimensions of their work, and who they are in contact with, and what they represent that I think is why Latino converts have garnered some attention from counterterrorism analysts and the community," Zarate said. "These are cases people are still following. They are still instructive."

One of the reasons these officials are interested in Latino converts is that al-Qaida appears to be. The terrorist group has specifically recruited Latinos under the assumption that they could move in and around the United States without arousing suspicion.

Before Wednesday's arrest, the most recent terrorism case involving a Latino happened over the summer. That's when two New Jersey men, Mohammed Alessa and Carlos Almonte, were arrested as they boarded a plane for Somalia. They allegedly planned to join the ranks of a terrorist group there called al-Shabab. The New York Police Department, the FBI and New Jersey law enforcement had had the two men under surveillance for years; Almonte, in particular, became of interest because he was Latino and allegedly so firmly embraced radical Islam.

"Carlos Almonte was of Dominican heritage, a naturalized U.S. citizen, from a middle-class family; his father was a school bus driver; and he grew up in a Catholic family," said Mitch Silber, the head of the New York Police Department's intelligence unit. "And as Almonte started to change, he dropped his non-Muslim friends and his change was visible to others."

Almonte allegedly started hanging out with members of Revolution Muslim, an Islamist group in New York, and joined their online chats. He began talking about what he saw as America's war on Islam. Those are two things that he apparently had in common with the suspect in this latest case, Martinez.

Officials say the Internet isn't the only place radicalizing these Latino converts. Authorities have been tracking an increasing number of Latino converts who embrace radical Islam in prison. The concern, Zarate says, is that prison recruits will redirect their criminal energies and engage in terrorism.

"I think that it is in that intersection with prison radicalization, gang culture, religious zealotry that you have a potential problem," Zarate said. "I wouldn't say it is a wave, but it is a potential problem authorities watch for."