Accessibility links
Facing Backward: Keeping Kids Safe In Cars Federal safety officials are holding a forum to explore car seat safety. That's because car crashes are the biggest killer of children in the U.S. Studies show that children in rear-facing car seats are five times safer than those who face forward. 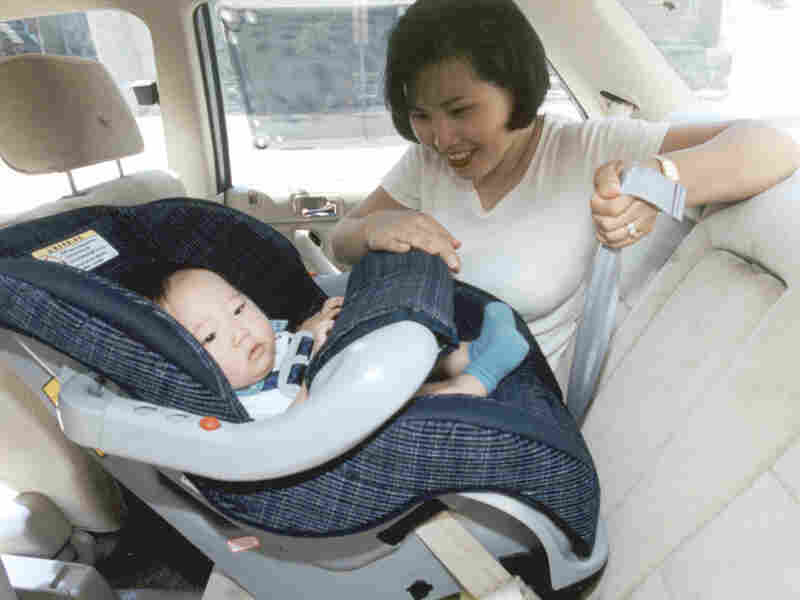 The leading cause of death for toddlers in the United States isn't poisoning, medical ailments or accidents around the home. By far the biggest killer of children is car crashes.

On Thursday, the National Transportation Safety Board holds a forum on car seat safety in Washington. Some of the recommendations could mean wholesale changes to how Americans transport their kids.

Alexandria Paige pulls her car into a parking garage in Birmingham, Ala. But she isn't looking for a spot. She's in search of the car seat installation team from Children's Hospital of Alabama.

"What we're going to do is get your little sweet pea out and I'm just gonna make sure that we have the harness straps in the car seat in the correct position before we get started," says Julie Farmer of the hospital's Child Passenger Safety Resource Center.

Farmer pokes her head into the back seat and finds Paige's 9-month-old son, Peyton, decked out in a Buzz Lightyear jacket. Paige needs a new car seat installed and is excited to finally have her son's rear-facing seat flipped around so she can see him.

"I've seen in other cars babies his age," Paige says. "I've seen them front-facing so I just always thought, 'OK, once he comes out of the infant seat, he faces [frontward].' "

She must wait a few months, though. Alabama, like most states, requires rear-facing car seats be used until toddlers weigh 20 pounds and are at least a year old. Farmer tells Paige that's just a minimum.

Rear-facing seats: Keep infants in the back seat in a rear-facing car seat until a minimum of age 1 and a weight of at least 20 pounds.

Booster Seats: Kids between the ages of 4 to 8 may use booster seats located in the back seat of vehicles.

"The best choice is for you to keep your child rear-facing as long as possible ...  not only because of the law, but because, well, of the law of gravity, I guess you could say," Farmer says.

The reason is simple physics. In a head-on collision, a rear-facing car seat spreads the energy of the crash across the toddler's entire back, not just across a narrow portion of a tiny body.

Studies have shown that toddlers in a rear-facing car seat are five times safer than those who face forward. In the U.S., five children a day die, on average, in car crashes. That's frustrating to pediatricians.

"I think we've become immune to this," says Ben Hoffman, a professor of pediatrics at the University of New Mexico School of Medicine. "I think it happens so frequently and with such regularity that we've lost focus on how important it is. And I think that we're so reliant on cars to get us from Point A to Point B that we've sort of accepted it as the price of doing business. "

Hoffman, who directs UNM's residency training program, is also a member of the American Academy of Pediatrics. For a couple of years the academy has wrestled with extending the requirements for how long children should be required to sit facing the rear in vehicles.

This is already the case in Europe. Most 4-year-olds in Sweden are transported this way. European car seats are larger, and the cars are engineered so they can accommodate them.

"Cultural change is very slow," says Alisa Baer, a pediatrician who helps run TheCarSeatLady.com. "The United States is a society that doesn't like to be told what to do."

For more than 30 years, she and her mother have worked to strengthen and expand state car seat laws.

A Push To Change Flight Requirements

The issue will get an airing at the National Transportation Safety Board's hearing. Also on tap is a proposal to require babies to be buckled into car seats on airplanes instead of being held on their parents' laps. The NTSB has long pushed the Federal Aviation Administration to make this change, which allows infants under 2 to fly free.

"When you get on an airplane, you're expected to fasten your seat belt on takeoff and landing and during turbulence," says Deborah Hersman, chairman of the NTSB. "The same should be true for children."

She concedes it would require parents to pay for an extra seat, but it would be much safer. Flying is still the safest mode of travel.

Safety experts applaud the call for changes and hope the added cost of flying won't force some families to drive to their destinations rather than fly.