Accessibility links
Chaplains Worry About Careers If 'Don't Ask' Is Lifted The possible repeal of the ban on gays serving openly is creating a dilemma for military chaplains opposed to homosexuality. Some say they may leave the military if forced to choose between their faith and their service. 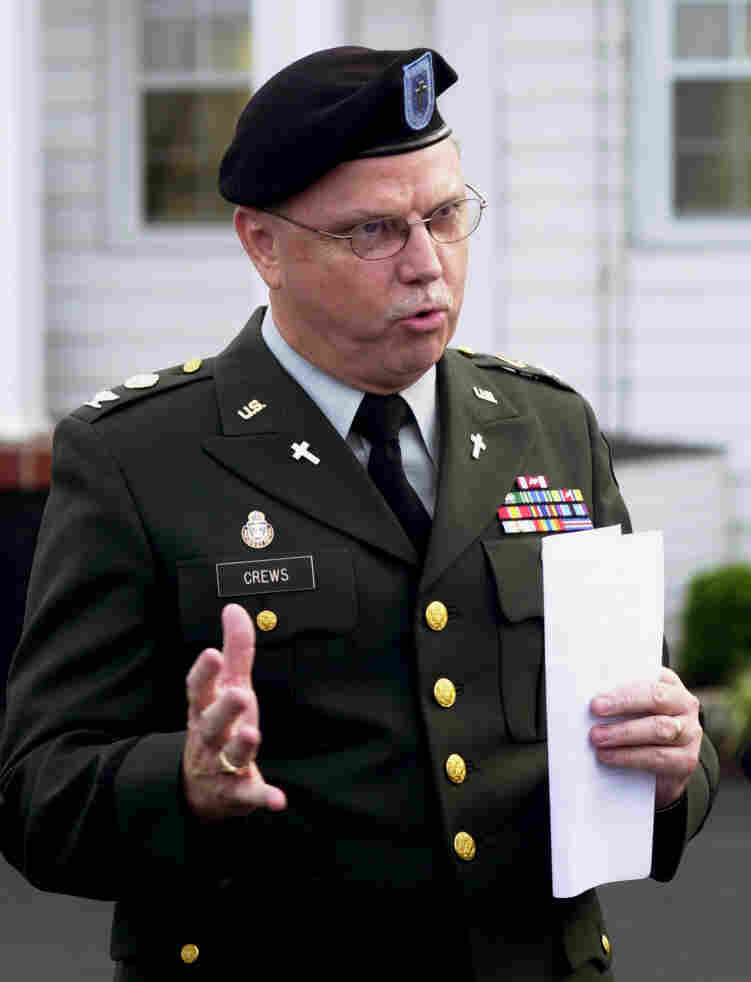 While most military personnel see no problem serving with openly gay comrades, some military chaplains are bristling. Many of the 3,000 chaplains are evangelical and believe repealing the "don't ask, don't tell" policy may affect how they do their jobs.

Ronald Crews, a retired Army colonel and chaplain, works with active chaplains from his evangelical denomination. A few months ago, he began asking military chaplains what they thought about repealing don't ask, don't tell. One response in particular bothered him. The chaplain had just returned from a briefing by a general about the impact of changing the policy and asked if the military would protect him if he asserted that homosexuality is a sin.

"And the response he received from this four-star general was, 'If you cannot accept the changes coming, you have an option: You can resign your commission,' " Crews says.

Crews is one of 66 retired chaplains who sent a letter urging President Obama to retain don't ask, don't tell. Active duty chaplains have also complained anonymously. One said in a Pentagon survey that the change creates an "unavoidable conflict" with his ability to preach and teach the Bible. Another asked whether chaplains would be forced to integrate gay soldiers into family ministry.

Daniel Blomberg, an attorney for the conservative legal group Alliance Defense Fund, wonders: What if a soldier confides to a chaplain that he's gay?

"What happens when the chaplain responds according to the dictates of his faith and says that type of behavior -- like other types of sexual sins -- is not in accordance with God's will?" he says.

Blomberg says the proposed rules don't make it clear how the chaplain should handle the situation. But, he says, the chaplain could be open to a charge of discrimination based on sexual orientation.

"And that could be career-ending for a chaplain," he says.

Chaplains won't be able to freely express their faith, he says. "They feel that repealing don't ask, don't tell will put them in the situation where they have to choose between obeying the God they serve and the country they love."

Retired Major Gen. John Altenberg, who was the No. 2 lawyer in the Army, disagrees. He says, for example, if a chaplain were uncomfortable counseling a gay soldier he could ask another chaplain to counsel him.

"They wouldn't be forced to do it," he says.

Dennis Camp, a retired colonel and Army chaplain for 27 years, says the proposed rules clearly protect a chaplain's religious rights. What chaplains can't do, he says, is act like "moral policemen" and openly condemn homosexuality. The chaplain's job is to serve everyone -- religious or not, gay or straight. Camp says the objections raised by evangelicals are a smoke screen.

"They have made it an issue because they want to fight this thing on moral grounds," he says. "That's not the kind of fight it is. It's a civil rights issue."

But ultimately, even if don't ask, don't tell is repealed, evangelicals say they'll still supply chaplains because so many people in the armed forces come from conservative denominations.