Accessibility links
Seafloor Samples Show Troubling Effects Of Spill A trip down to the bottom of the Gulf of Mexico in a submarine reveals a bleak portrait of the sea life near the ruptured BP well. Scientists are finding a thick layer of oil on the seafloor, and they say it could be years before the ecosystem recovers. 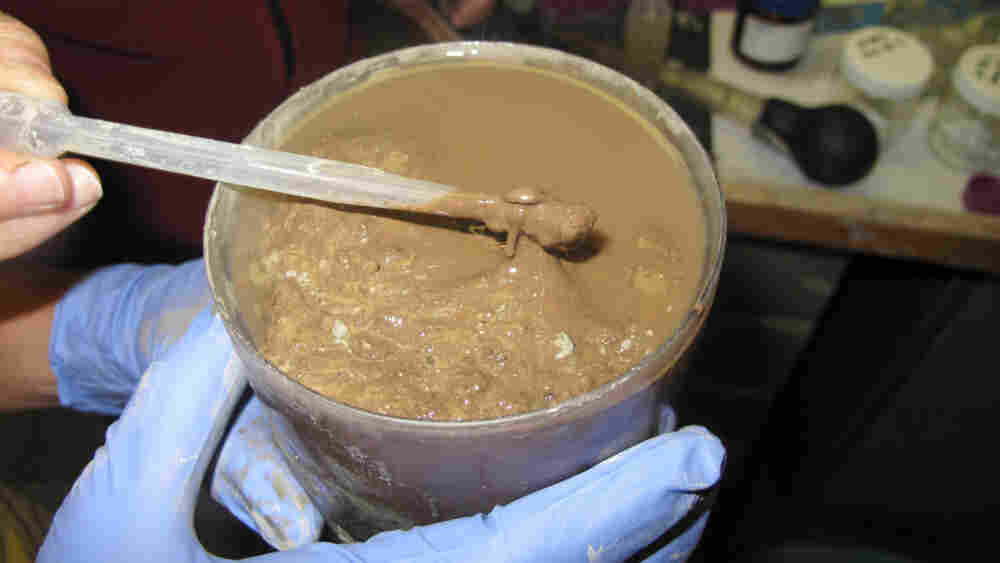 A core sample from the seafloor of the Gulf of Mexico contains oily debris and dead organisms, including this worm. Richard Harris/NPR hide caption 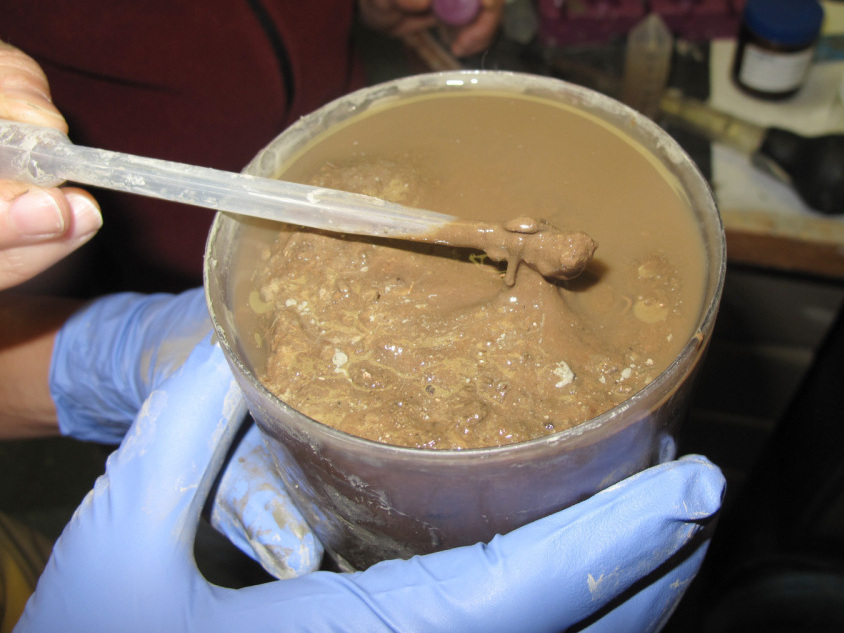 A core sample from the seafloor of the Gulf of Mexico contains oily debris and dead organisms, including this worm.

Scientists trying to determine the fate of the oil from the BP blowout recently dived in a mini-sub to look for it at the sea floor. And they found it -- or I should say we found it, since I was along on the dive.

To start our trip to the seafloor, three of us scrunched into the titanium hull of a submarine named Alvin, on the rear deck of the research vessel Atlantis, from the Woods Hole Oceanographic Institution.

The descent through half a mile of inky black water was gentle, almost meditative. And when the sub's lights finally illuminated the bottom, the scene was serene -- fish and shrimp paddled around near the seafloor, going about their business, and crabs scuttled along the bottom.

There was no black goo on the bottom, about 10 miles from the Macondo well. But biologist Samantha Joye from the University of Georgia says she wasn't expecting anything quite so blatant.

Instead, we saw a brown haze covering the seafloor, and Joye started noticing things that weren't quite right.

A once-magnificent fan coral was covered with brown fuzz -- dead.

We cruised along some more, with pilot Mike Skowronski guiding us past a feature called "Sleeping Dragon" -- a mound of methane ice, the size of a school bus. It is home to creatures adapted to living near natural petroleum seeps.

A few minutes later, the texture of the seafloor changed from smooth brown to bumpy, like cottage cheese.

"It's not typical," Joye said, peering through a camera that looks straight down on the bottom. "It should be flat, boring gray, and it's brown, very porous looking, spongelike material."

Joye said it looks a lot like samples she collected in September. 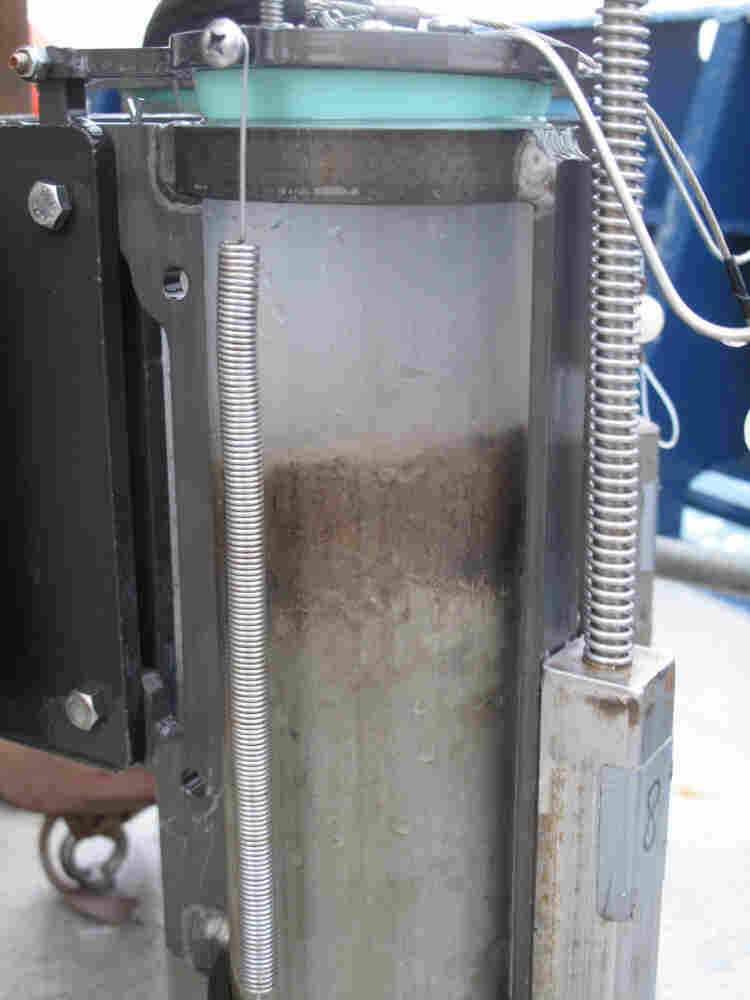 A core sample taken from the seafloor of the Gulf of Mexico shows a 2-inch layer of oily material at the top. Scientists say this layer contains oil digested by marine life as well as some dead animals. Richard Harris/NPR hide caption 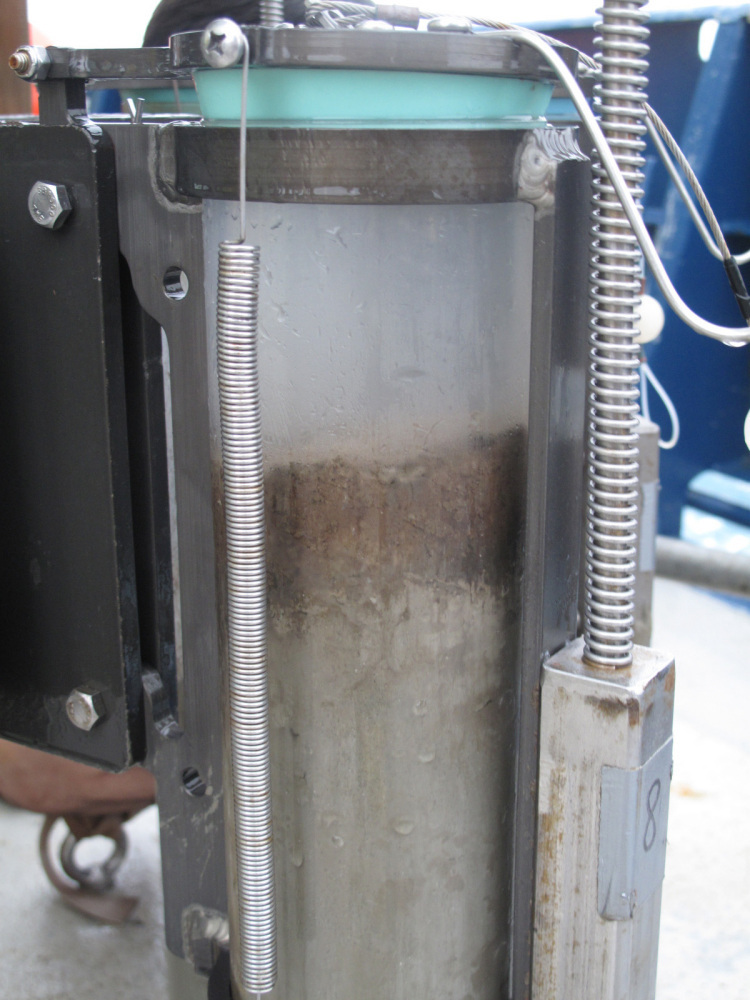 A core sample taken from the seafloor of the Gulf of Mexico shows a 2-inch layer of oily material at the top. Scientists say this layer contains oil digested by marine life as well as some dead animals.

"That stuff contained a good bit of oil, so I think we're getting into the area where there's been substantial deposition of oil on the bottom," she said.

And the question foremost on her mind was: What's all this brown muck doing to life on the seafloor?

Oil 'Pudding' On The Seafloor

After nearly six hours of surveying the seafloor, the Alvin gently rose again to the surface.

Back onboard the Atlantis, the scientists went to work, examining many dozens of seafloor samples collected by Alvin and by a shipboard instrument called a multicorer.

The cylindrical samples of seafloor share a similar pattern: Those taken within a few miles of the Macondo well are covered with a 2-inch layer of muck that looks like chocolate pudding.

Laura Beer, a post-doc from Joye's lab, says you'd almost want to taste it -- that is, until you notice it's full of dead worms and other sea life. We see almost no living creatures in these samples.

The biologists say they were either smothered by the brown gunk or poisoned by it. Joye needs lab tests to figure out its exact composition, but judging by previous samples, she knows what to expect.

"It's oil and mucus and marine debris and everything else that's pulled out through the water column when [the oil] came down," she says. "When you're this close in [to the Macondo well], you could also get some tar and asphalt just coming out of the well and rolling downslope." 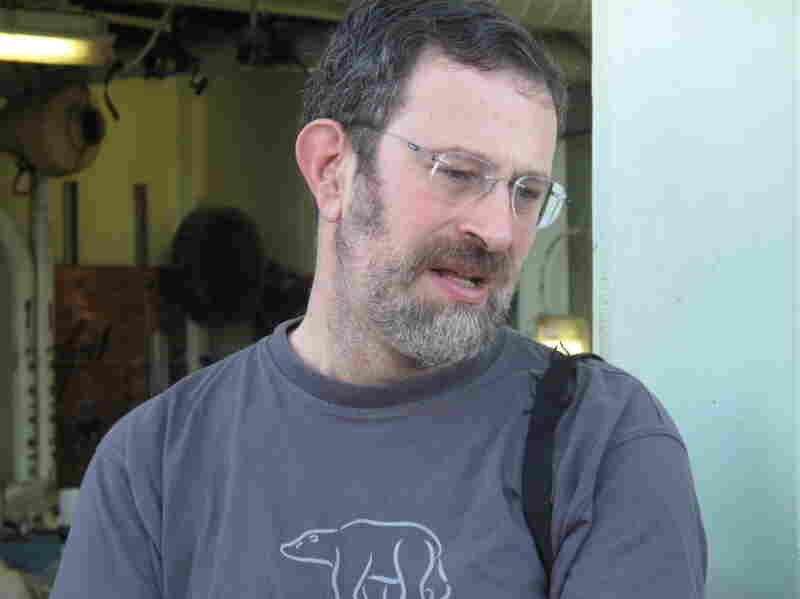 Andreas Teske, a professor of marine sciences at the University of North Carolina, Chapel Hill, says most of the brown layer that coats the normally gray seabed is oil that has passed through the digestive systems of marine animals. Richard Harris/NPR hide caption

Her colleague, Andreas Teske from the University of North Carolina, Chapel Hill, says most of this "pudding" is probably oil from the BP well that has since passed through the digestive systems of all sorts of animals on its way to the seafloor. Teske says it reminds him a lot of the spring algae blooms that can choke coastal bays.

"We think something similar has happened here," he says. "It was not a spring bloom, but an 'oil bloom,' and we are looking right now at the remnants of this oil bloom."

'Years For The System To Recover'

Regardless of how it got there, Joye says this brown muck is killing life on the seafloor.

Ian MacDonald from Florida State University says the dead fan coral was likely 500 years old when the brown muck came along to snuff it out.

"That really was one of the simple examples that really hit home to me, exactly what I have been concerned about," MacDonald says.

More Coverage Of Oil In The Gulf

There are still government officials and scientists who want more proof before they are willing to say a lot of BP oil ended up at the bottom of the Gulf of Mexico, and MacDonald certainly respects that skepticism. After all, skepticism is a healthy element of science.