Accessibility links
Silencing WikiLeaks A Free Speech Challenge Administration officials, angry over the disclosure of sensitive intelligence information, have harshly criticized WikiLeaks, and the Justice Department is considering whether founder Julian Assange can be prosecuted. Critics say such efforts don't square with the U.S. commitment to expanding the free flow of information online. 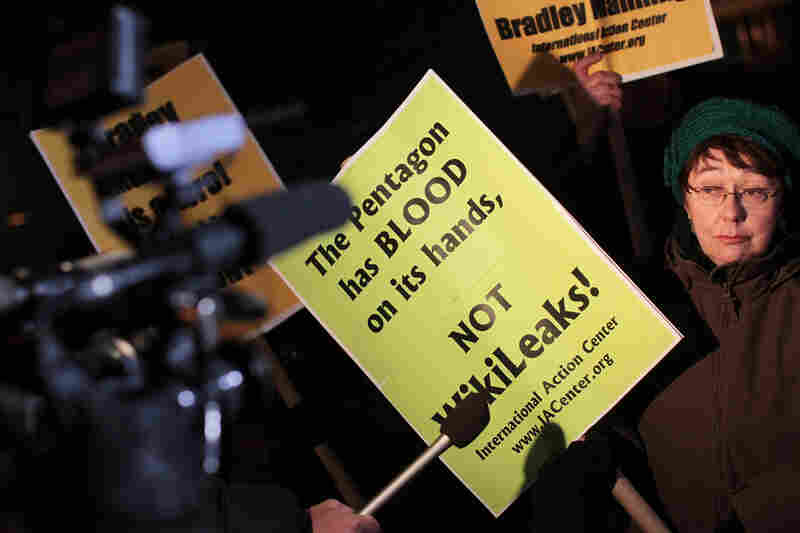 Julian Assange and his organization WikiLeaks have provoked controversy over U.S. foreign and security policies in recent weeks with their disclosure of classified intelligence reports and secret diplomatic cables. In its latest phase, the WikiLeaks saga is fueling an even larger debate -- over the future of the Internet itself.

"This is the biggest free speech battle of our lifetimes," says Marcia Hofmann, a senior staff attorney at the Electronic Frontier Foundation. "This is the moment when we will see whether publishers can continue to freely distribute truthful political information online."

The stakes are high on all sides, beginning with the Obama administration, which has consistently championed the cause of Internet freedom. In a speech in January, Secretary of State Hillary Clinton cited President Obama as believing that "the more freely information flows, the stronger societies become."

The WikiLeaks struggle, however, has undermined the administration's arguments. The "new facts" revealed by WikiLeaks are mostly embarrassing American officials, not foreign dictators, and it is the U.S. government that is being held accountable for the actions that have been chronicled.

Administration officials, angry over the disclosure of sensitive intelligence information, have harshly criticized WikiLeaks, and the Justice Department is considering whether Assange can be prosecuted for publishing classified documents on the Internet. Republican Rep. Peter King of New York, the incoming chairman of the House Homeland Security Committee, introduced legislation Thursday that would provide prosecutors with additional authority for that very purpose.

Administration critics say such efforts don't square with the U.S. commitment to expanding the free flow of information online.

[T]he best way to promote free speech is to continue to speak about things that you don't like. The worst thing you can do is shut someone else down.

"This basic impulse to promote Internet freedom abroad is contradicted by the wishes of American policymakers who don't want to see a free Internet [if] it undermines American power," says Evgeny Morozov, a fellow at the New America Foundation and frequent blogger on the Internet's impact on global politics. "It basically makes America look very hypocritical."

Russian Prime Minister Vladimir Putin, often criticized for infringements on free speech and a free press in his own country, is among those challenging the U.S. government for its criticism of Assange and WikiLeaks.

"As they say in the countryside, some people's cows can moo, but yours should keep quiet," was Putin's earthy comment on Thursday.

But the WikiLeaks struggle has also brought supporters of Assange and his organization to a critical point. Some of the more radical elements within the movement are launching cyberattacks against PayPal, MasterCard, Visa and other companies that have cut ties to WikiLeaks. The effort, dubbed "Operation Payback," is being led by a hacking group calling itself Anonymous.

Some activists have even allowed their computers to be used in a distributed denial of service -- DDoS -- attack aimed at overloading the websites of the targeted companies.

"People feel like joining," says Sean-Paul Cordell, a threat researcher at Panda Security who has been monitoring the DDoS attacks. "You don't have to stand in a picket line anymore. I think people realize that they can fight back with technology."

The new approach could yet prove problematic for the pro-WikiLeaks movement. Under some provisions of the Computer Fraud and Abuse Act, DDoS attacks are arguably illegal and could expose those taking part in the attacks on MasterCard and other companies to criminal prosecution.

"We're disappointed to see these attacks on these websites," says Hofmann of the Electronic Frontier Foundation. "This is a free speech debate, and the best way to promote free speech is to continue to speak about things that you don't like. The worst thing you can do is shut someone else down."

The new turns in the WikiLeaks struggle make its outcome uncertain. Escalation by the United States and allied governments could radicalize the Internet freedom movement. But confrontational tactics on the part of WikiLeaks supporters could alienate some of those who may otherwise sympathize with them.