Accessibility links
Movie Review - 'The Fighter' — Around a Small-Town Hero, Lots Of Big-Time Drama Boxer Micky Ward has his work cut out for him in the ring, but his real battles involve his disaster of a family. His drug-addict brother, and the manager mother who defends the louse, make for a challenging rise to success. (Recommended) 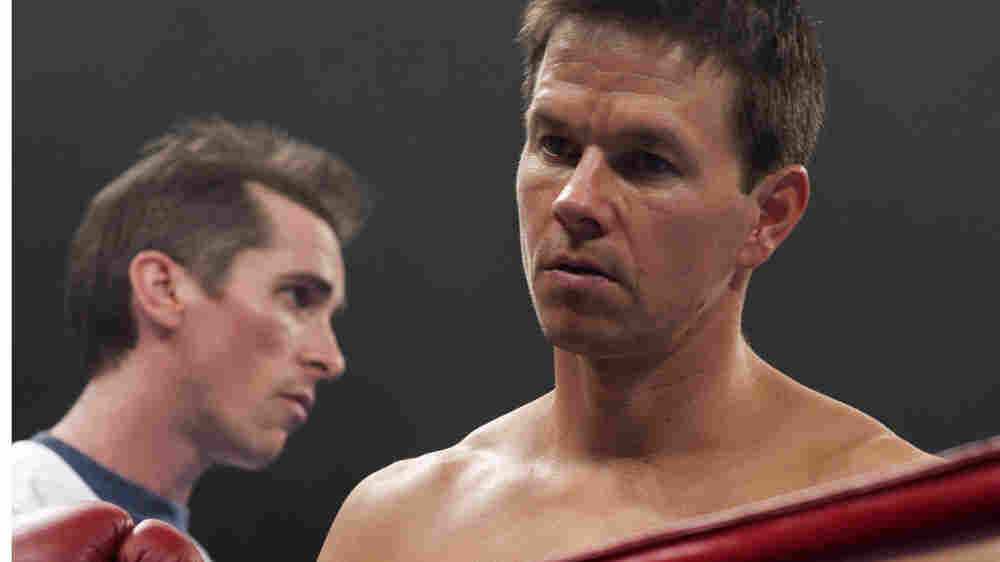 Rated R for language throughout, drug content, some violence and sexuality

From 'The Fighter' - 'What Problems?'

'I'm The One Fighting'

The real fight in The Fighter isn't between "Irish" Micky Ward (Mark Wahlberg) and his boxing-ring opponents, but between Micky and his half-brother Dicky Eklund (Christian Bale). More accurately, it's between Wahlberg's and Bale's performances, and the tussle for the heart of the movie proves more evenly matched than you might think.

In one corner is Wahlberg's slow, steady burn as a talented pugilist -- "the guy they use to help the other guys move up," as one reporter cruelly suggests --just looking for a break; in the other is Bale's operatic embodiment of a broken hero sustained by drugs and memories.

But there's another battle going on as well. Based on the true story of the professional welterweights who put the blue-collar town of Lowell, Mass., on the map, David O. Russell's shamelessly entertaining movie offers a fascinating glimpse at the tension between form and artistic temperament. Structured like a classic, feel-good underdog story, the script (by Scott Silver, Paul Tamasy and Eric Johnson ) is constantly at odds with a director whose artistic sensibility so far suggests he doesn't have a conventional bone in his body. It's probably fair to say that the man who gave us Three Kings, I Heart Huckabees and best of all Spanking the Monkey simply doesn't have it in him to be Ron Howard.

Yet Russell's struggle to deliver uplift from this storm of conflict is part of what makes the movie so riveting. We meet the brothers in 1993 as Dicky, once hailed as "the Pride of Lowell" after a contested knockdown of Sugar Ray Leonard, is being shadowed by a filmmaking team from HBO. Dicky thinks they're documenting his much-touted comeback, but they're really using him as a cautionary example for a film about addiction. That Dicky, with his vacant leer and strutting braggadocio, should be entrusted with Micky's training is the film's saddest joke: Protected by his insanely doting mother, who seems oblivious to his crack-pipe gaze and sweaty skin, Dicky is a black hole of delusion.

Melissa Leo's Alice, meanwhile, is a Valkyrie in frosted bangs and high-waist jeans, a mommy-dearest caricature -- and Micky's manager. Her slash of a mouth, smeared with lipstick and curled, more often than not, in a rictus of maternal defensiveness for her beloved Dicky, never holds still. With the help of at least two husbands, Alice has produced a litter of dour, thick-waisted daughters who cling together like dough in the background of family fights and in the foreground of attacks on Micky's girlfriend, Charlene (a terrific Amy Adams). A flinty bartender and college dropout, Charlene is detested by the sisters, both for her sway over Micky and the fact that her abbreviated shorts and midriff-baring tops can't conceal a serious desire for a better life. 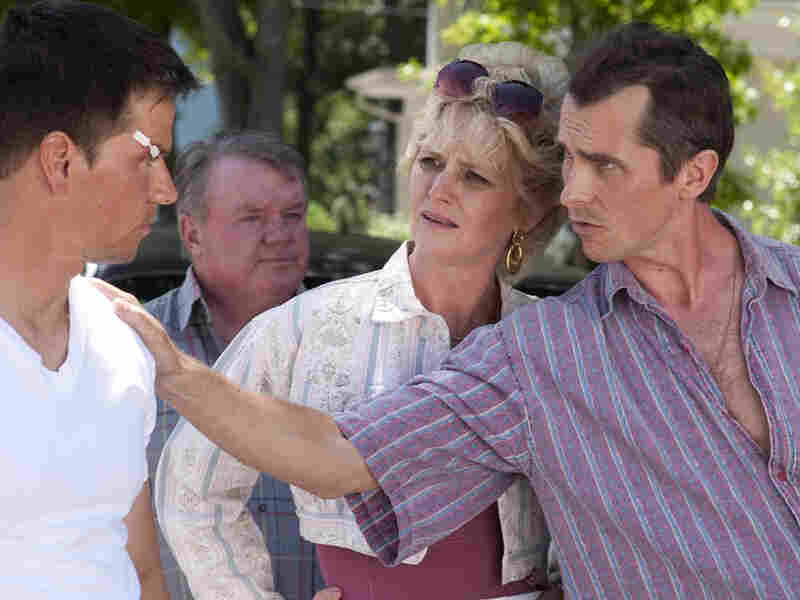 Despite ample provocation, Wahlberg's Micky can never quite bring himself to decide that his emotionally abusive family (Jack McGee and Melissa Leo, with Bale) represents a career roadblock he may never surmount. JoJo Whilden/Paramount Pictures hide caption 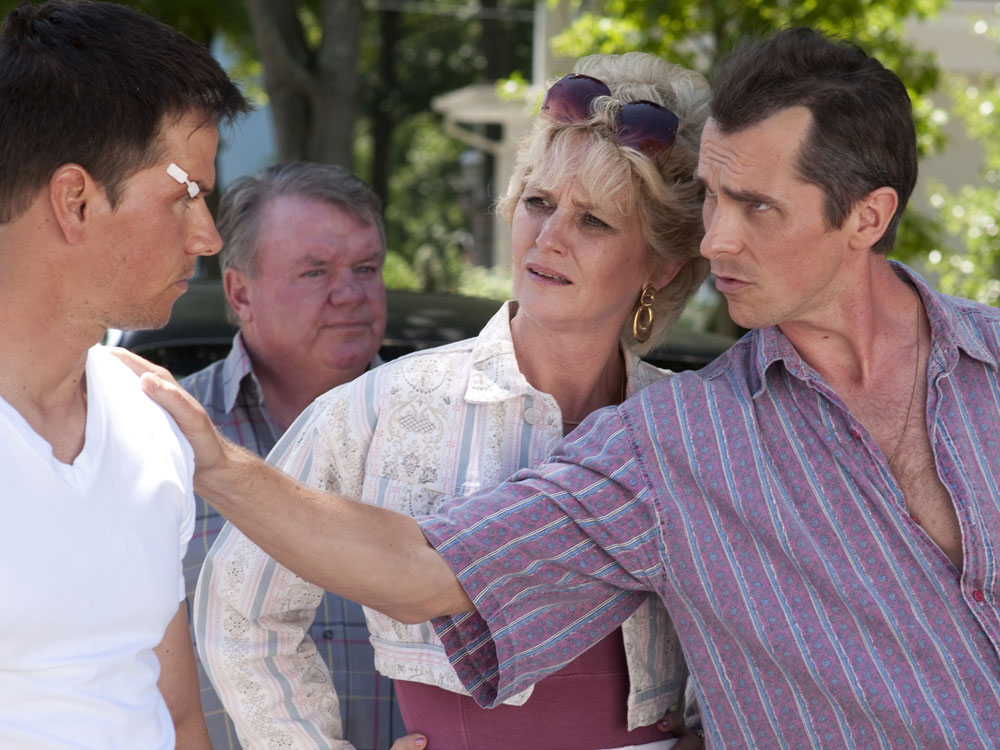 Despite ample provocation, Wahlberg's Micky can never quite bring himself to decide that his emotionally abusive family (Jack McGee and Melissa Leo, with Bale) represents a career roadblock he may never surmount.

Surrounded by all this scenery-chewing, Wahlberg's quieter, technique-driven, but equally impressive performance is in danger of going unnoticed. Like Alice, Russell seems to favor the lost brother over the one worth saving: We're dying for Micky to recognize his family as the waste of space they clearly are, as low-rent obstacles to his success. But Russell refuses to give us that catharsis, and whether he wanted to steer his film differently or was bound by the desires of the real-life brothers, we may never know.

Instead, the director fights formula with a few tweaks of his own. Understanding that most people's experience of boxing is through television, Russell consistently connects the sport to its favored medium; scenes flip in and out of the HBO crew's point of view, and the script is peppered with references to ESPN. The fights themselves were shot on video to simulate a televised broadcast, lending them a flickering graininess that's simultaneously familiar and distancing. Even so, the bing-bam-boom of Micky's fight strategy -- to allow himself to be pummeled almost to oblivion, then snap back at the 11th hour -- transmits clear as a bell.

At its best, The Fighter takes on the chasm between televised boxing and its mostly working-class, aspirational origins with grit and intelligence. In a cute coda during the credits, the real brothers appear, grinning like leprechauns and chattering indecipherably. We see and hear enough, however, to suggest that maybe Bale's performance wasn't so far off the mark. (Recommended)