Accessibility links
Decadence and Decay: Kurt Weill's 'Mahagonny' Kurt Weill unleashed his entire musical and dramatic arsenal in this astonishing and decadent opera, which he wrote in his early twenties. The action is set in a fictional American city, but it's reminiscent of Weimar, Germany.

Rise And Fall Of The City Of Mahagonny

Rise And Fall Of The City Of Mahagonny 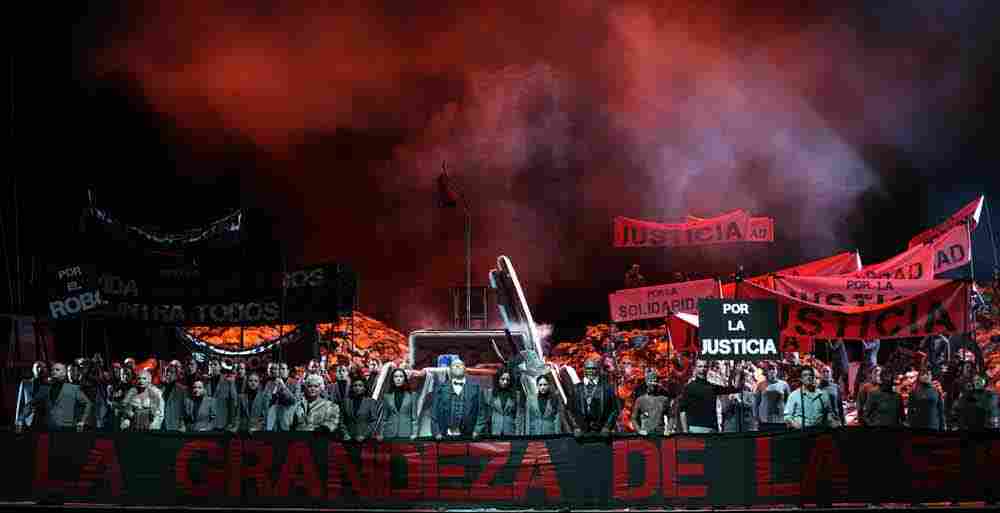 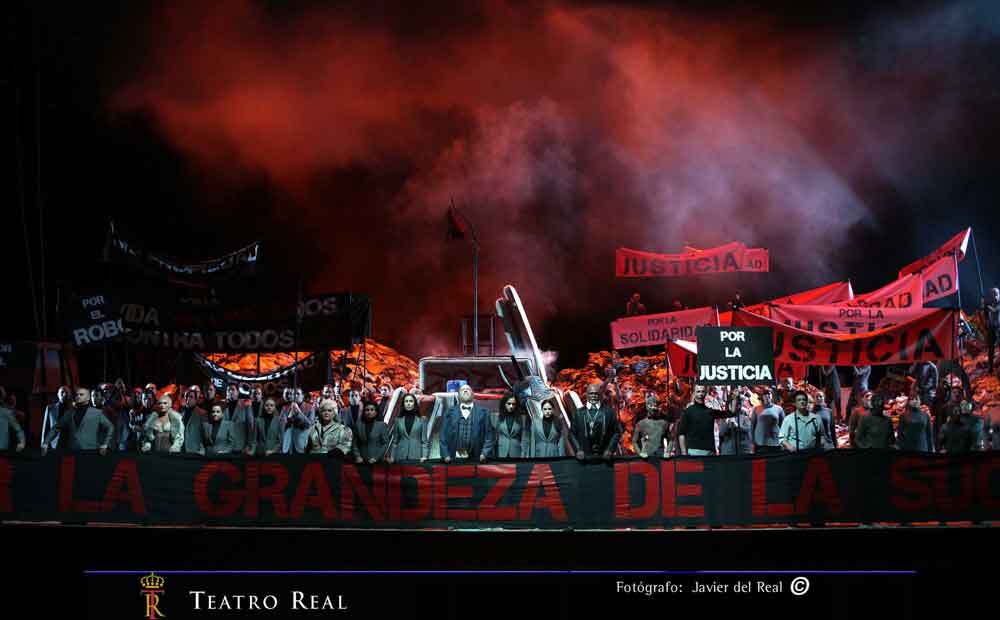 In Kurt Weill's opera, the city of Mahagonny was founded by three fugitives hoping to extort money from prospectors.

Among the first residents of the newly-founded Mahagonny are a group of six women, led by Jenny Smith (soprano Elzbieta Szmytka). They launch the "Alabama Song" with the words, "Show us the way to the next whisky bar."

At the top of Act Three, Jimmy (tenor Christopher Ventris) has been arrested and chained to a lamp post. Before sunrise he sings a defiant aria, cursing the coming day.

When The Sky Turns Brighter

Kurt Weill was one of the 20th century's most accomplished and versatile composers, and in his astonishing opera Rise and Fall of the City of Mahagonny, written when he was still in his twenties, he seems to have unleashed his entire musical and dramatic arsenal.

Born in 1900, Weill studied music in Berlin, working with composers as wide ranging as Engelberg Humperdinck and Ferruccio Busoni. Mahagonny began life as a sort of theatrical song cycle called the "Mahagonny Songspiel," set in a fictional American city, which helped launch Weill's fruitful collaboration with writer Bertold Brecht. The "Songspiel" was both a scandal and a success at its Berlin premiere in 1927, and Weill and Brecht quickly began expanding the score into a full scale opera.

At the same time they also wrote their famous "play with music," The Threepenny Opera, which took Germany by storm after its premiere in 1928. Mahagonny was at first turned down for a premiere in Berlin. Potential publishers found the work "depraved" -- much of the action takes place in beer halls and bordellos, and its characters are an irreverent bunch to say the least. The eventual premiere, in Leipzig in 1930, caused a considerable uproar, leading to protests on moral, religious and political grounds.

Late in 1931, a shortened version of the opera did have a brief, commercial run in Berlin. But with the Nazi takeover in 1933, Weill's music was banned in Germany and he was forced to leave the country. Weill first went to Paris and then to New York, where he had a successful career on Broadway. His hits included Lady in the Dark, starring Gertrude Lawrence and Danny Kaye, and One Touch of Venus, which launched the Broadway career of Mary Martin.

In the "Mahagonny Songspiel," Weill relied on an experimental, non-tonal harmonic style that characterized much of his early music. But with the operatic Mahagonny, he began turning to the more traditional harmonic language heard in his later works, including his Broadway musicals.

Still, the score is very much an opera -- and one that demands a lot from its performers. Musically, it requires singers with truly operatic voices who can also work effectively with a popular style of music.Dramatically, with the unflinching nature of its moral and political messages, the opera certainly has the feel of a paean. But those messages are often divergent, and whether the drama is a tribute to idealism or to cynicism may depend largely on its audience's point of view.

On World of Opera, host Lisa Simeone presents a production of Rise and Fall of the City of Mahagonny, sung in English, from the Teatro Real in Madrid. The stars are tenor Christopher Ventris as Jimmy McIntyre, soprano Elzbieta Szmytka as Jenny Smith and mezzo-soprano Jane Henschel as Leocadia Begbick.

The Story of 'Rise and Fall of the City of Mahagonny' 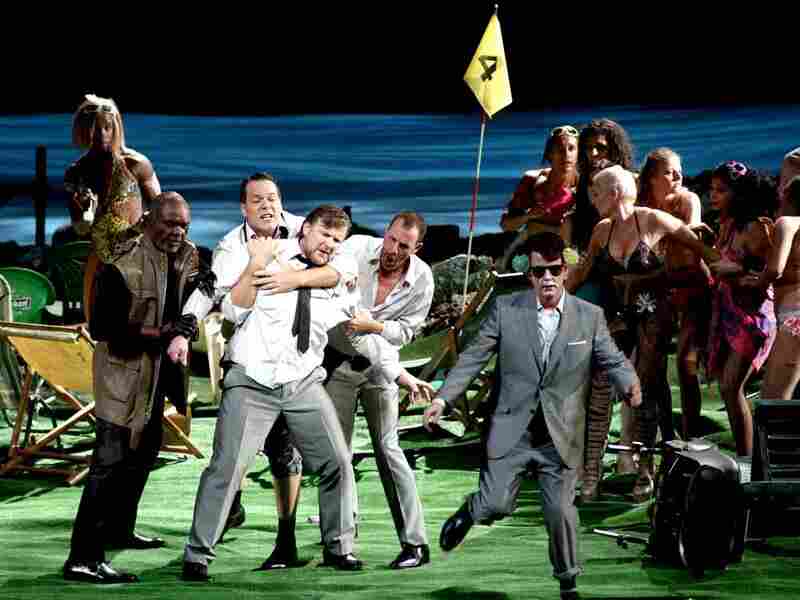 Fighting, lovemaking, eating and getting drunk are the main goals of the men of Mahagonny. Javier del Real hide caption 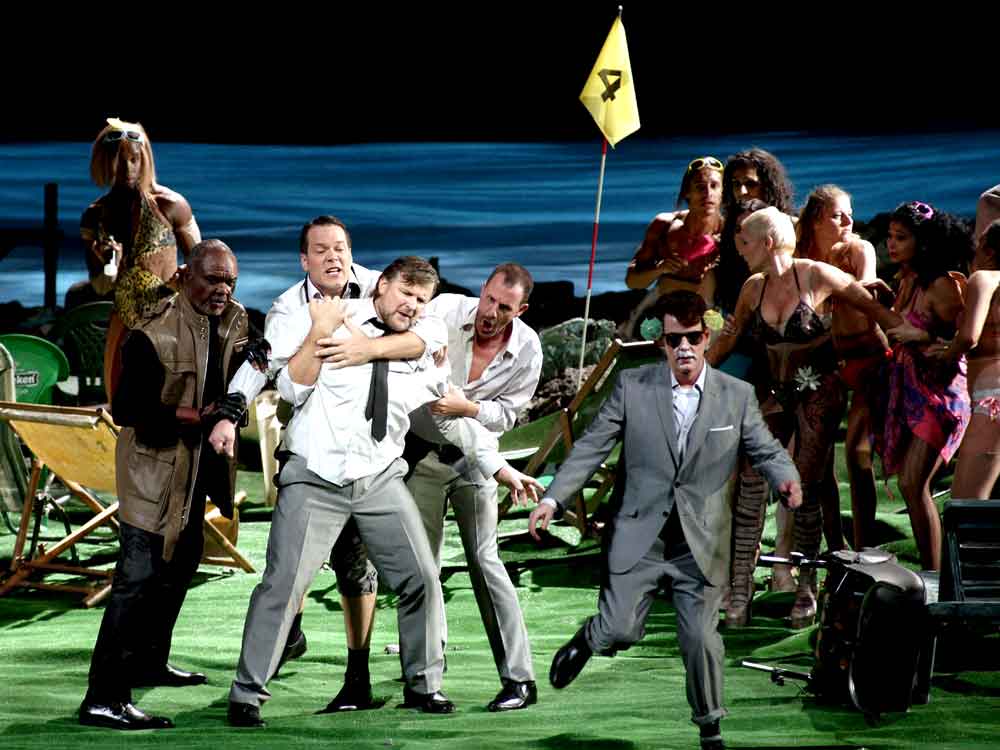 Fighting, lovemaking, eating and getting drunk are the main goals of the men of Mahagonny.

As Act One opens, a rickety truck rolls onto the stage and promptly breaks down.  Its occupants are Leocadia Begbick, a widow, and two men:  Fatty the Bookkeeper and Trinity Moses.  All three are fugitives, wanted for bank fraud and white-slaving.  They've been headed for a place where people were said to be panning gold, hoping to strike it rich.

Now, the widow Begbick decides they should stop and found their own city -- a place where they can entice prospectors into spending their money.  She observes that, "It's easier to get gold from men than from rivers."  They'll call the city Mahagonny, which means "spider web."

Before long, they're joined by a group of women -- prostitutes, led by Jenny Smith. They arrive singing the familiar "Alabama Song."  Fatty and Moses recruit men from around the world, and four men turn up from Alaska. They're lumberjacks:  Jack O'Brien, Bank-account Bill, Alaskawolf Joe and Jimmy McIntyre.

Begbick suggests that the newcomers might just enjoy the company of the freshly arrived women.  Jimmy pairs off with Jenny Smith, who seduces him with the "Havanna Song."

For a while, the new city is going strong. But when the economy takes a nosedive Begbick thinks about giving up and leaving. Fatty reminds her that the police are still after them -- the newspaper says G-men have been spotted in nearby Pensacola, asking questions.

Meanwhile, Jimmy is also unhappy and thinking about leaving town. He says the city has become dull --there's too much peace and quiet, too many rules and regulations. His friends convince him to stay, and the peace and quiet is soon interrupted when a hurricane threatens Mahagonny.

News arrives that the storm has destroyed Pensacola, which is good news for Begbick, as she now assumes all the G-men are dead.  Still, the hurricane is getting closer and may destroy Mahagonny, as well.  But Jimmy says that's all the more reason to loosen up and enjoy life.  As the act ends, he sings, "In this world you make your own bed.  And no one will show you the trick.  So lie down and get kicked if you want to.  As for me, I will stand up and kick!"

As Act Two begins the storm is getting closer and announcements are made over a loudspeaker, saying that nearby cities are in ruins.  But at the last instant, the hurricane makes a miraculous turn, and Mahagonny is spared.

Saved from oblivion, everyone decides that it's time to get on with their carefree lives.  The men declare a four-part recipe for the high life:  First, there's eating.  After that comes lovemaking.  Then there's fighting, and step four is getting drunk.

Jack O'Brien is already known as a glutton and he gets things started with a feast.   He consumes two entire calves, and before long he has literally eaten himself to death.  When the time comes for love, the men line up outside the Mandalay brothel, where Leocadia Begbick advises them to spit out their gum, wash their hands, and make sure to give the women a civil greeting.

With activities finished at the bordello, it's time for the fighting to start.  Alaskawolf Joe announces a prizefight, between him and Trinity Moses.  Others advise him against it -- Trinity is a tough customer -- but Joe is confident and convinces Jimmy McIntyre to bet all his money on Joe's victory.  Yet in the ring, Joe is outmatched.  Trinity wins the fight easily -- killing Joe in the process.  "The guy just couldn't take it," the crowd decides.

The mood lightens as the drinking begins. Jimmy orders rounds for the whole house -- but he lost all his money on the fight, and when Begbick delivers the bill, he can't pay.  Jenny refuses him a loan, citing his own advice that, "You make your own bed in this world," and Jimmy is taken away as the act ends. 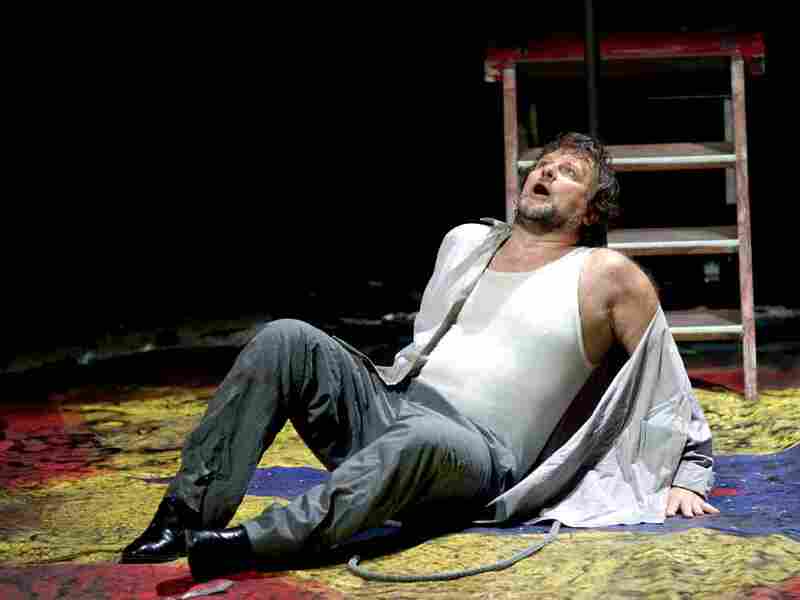 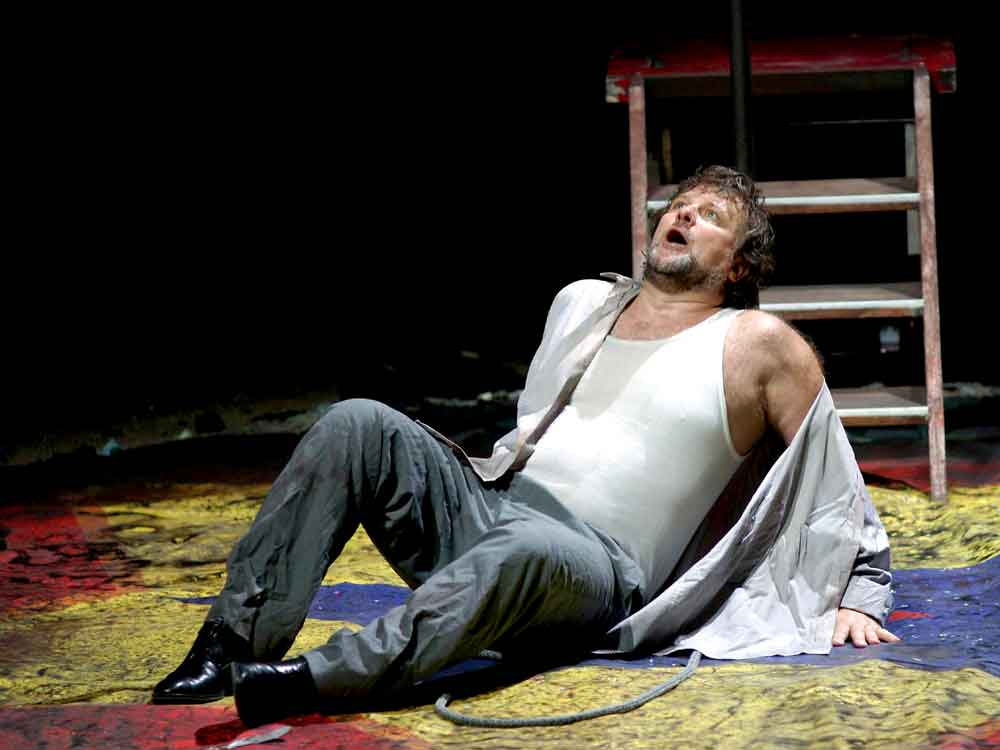 In Act Three, Jimmy is chained to a lamp post as dawn approaches and defiantly hopes that the next day will never begin.

Meanwhile, a court is assembled to try the city's criminals -- including Jimmy.  Leocadia Begbick sits at the judge's bench.  Fatty is at the defense table and Trinity is outside, selling tickets for the proceedings -- five bucks a pop.

First on the docket is a man named Toby Higgins.  He's accused of a brutal murder.  But as the case proceeds, he signals that he's willing to fork over a bribe.  As the evidence mounts against him Toby keeps adding money to the bribe.  When the sum gets large enough he's promptly acquitted, and released.

Now it's Jimmy's turn to stand trial.  He's accused of seducing Jenny and of being an accessory to Joe's death.  He gets jail time for those crimes. Then he's charged with the worst offense of all:  going broke and failing to pay.  For this last charge Jimmy is sentenced to death, and he says a quiet goodbye to Jenny.

Jimmy is led to the gallows, and the people enact a visit by God to Mahagonny, with Trinity Moses in the role of the deity.  Everyone thinks they deserve a place in heaven.  When told that they're bound for hell, they refuse to go -- saying they're in hell already.

The city is overcome by chaos and conflict.  Protesters calling for "justice" parade Jimmy's coffin through the streets.  Others advocate for "life without limits," the "saleability of love" and "unlimited murder."

As the opera ends, there's a consensus:  It's too late for Mahagonny, just as it is for Jimmy, and the crowd concludes that, "Nothing you can do will help a dead man."  The opera ends with a dire pronouncement from the entire cast: "Nothing will help him, or us … or you."