Accessibility links
DREAM Act Fades, Supporters Ponder Next Move With the measure stalled in the Senate and unlikely to come up for a vote, Latino scholars and organizers weigh in on the implications of its likely failure to pass Congress. 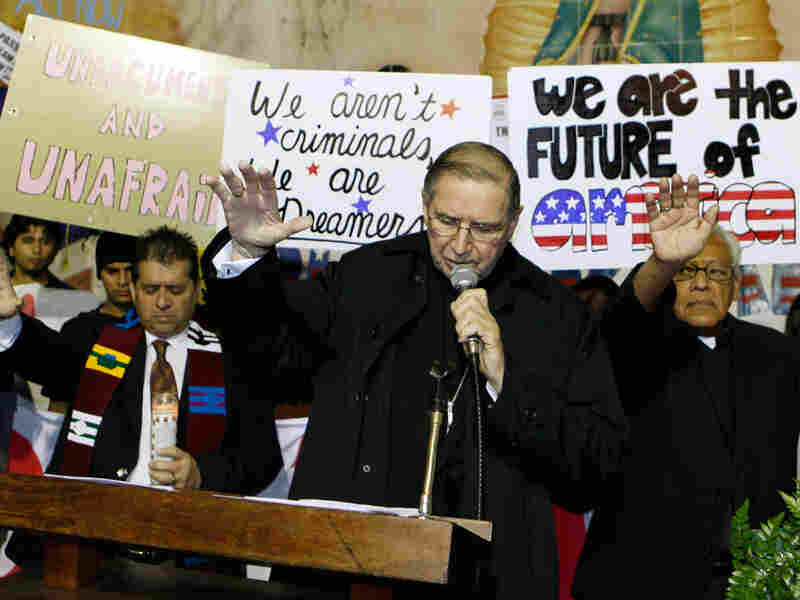 Led by Cardinal Roger Mahony of the Archdiocese of Los Angeles, supporters of the federal DREAM Act participate in a candlelight procession and vigil Tuesday in downtown Los Angeles. Damian Dovarganes/AP hide caption 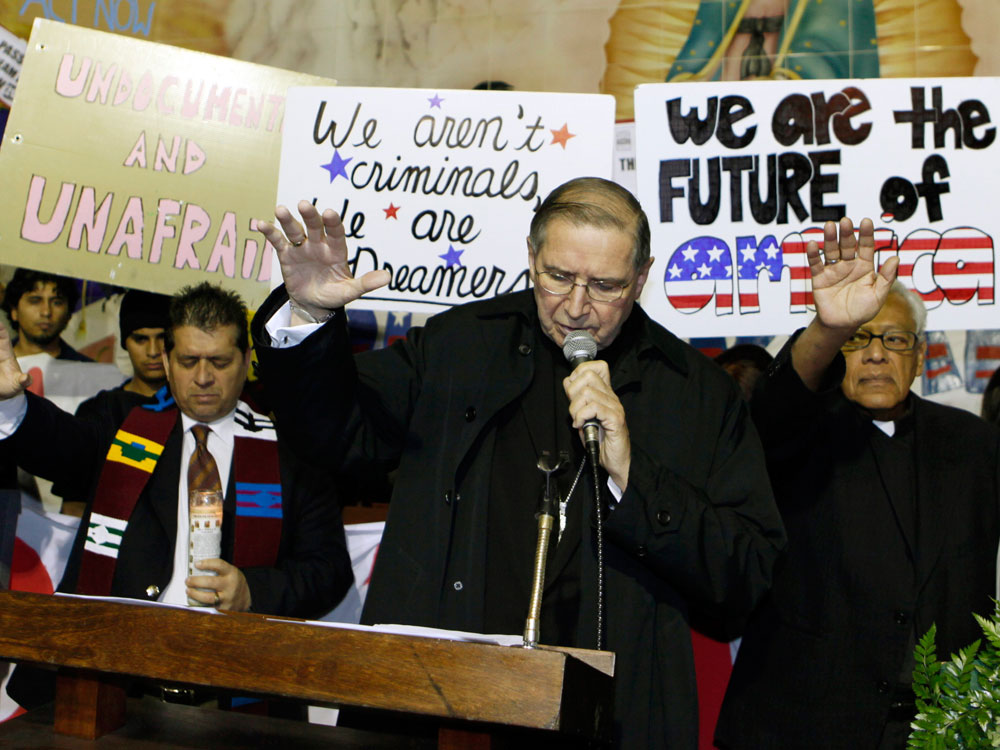 Led by Cardinal Roger Mahony of the Archdiocese of Los Angeles, supporters of the federal DREAM Act participate in a candlelight procession and vigil Tuesday in downtown Los Angeles.

Thursday's Senate setback of a measure to give grown children of illegal immigrants a path to citizenship has supporters considering their next move -- and wondering about the political implications of the action.

The DREAM Act stalled and very likely died Thursday in the Senate, after Majority Leader Harry Reid was unable to persuade enough Republicans to give the measure the 60 votes it needed to avoid a GOP filibuster.

The measure, which passed the House Wednesday by a 216-198 vote, would create the citizenship path through college or military service. Reid, a Nevada Democrat who won a tough re-election in November, promised his constituents that he'd bring the measure to the Senate floor.

Reid's request that the Senate table the motion passed 59-40. Given the lack of Republican support and the dwindling number of days left in Congress's lame-duck session, the chances that the act will be reconsidered are slim.

It is the latest setback in Congress' halting, highly politicized efforts to resolve issues related to illegal immigration -- either piecemeal or with comprehensive national immigration legislation.

Those efforts were once bipartisan: Republican Sen. Orrin Hatch of Utah was an original sponsor of the DREAM Act and now opposes it, along with his fellow Utah Republican, Sen. Bob Bennett, who also once endorsed the measure.

Hatch, who once questioned why children of illegal immigrants should be punished "if they've lived good lives, if they've done good things," has said he now prefers that immigration policy focus on securing borders.

NPR asked two leading Latino scholars and organizers to weigh in on the implications of the failure of the DREAM Act to clear Congress.

Arturo Vargas is the executive director of the National Association of Latino Elected and Appointed Officials. Rodolfo O. de la Garza is a Columbia University professor of administrative law and municipal science with a specialty in ethnic politics, including Latino public opinion and electoral involvement, and immigration.

Voting against the DREAM Act will solidify the long-standing pattern of Latino support for Democrats, which in the long run may do serious damage to the Republican Party.

Q: What are the political implications for Republicans who oppose the DREAM Act?

Vargas: Immigration reform and the DREAM Act were two of the top issues for many of the Latinos who voted in November's elections. Latino voters have demonstrated that they are following the actions of Congress closely and are paying attention. The lack of support among Republicans for passage of the DREAM Act could undermine efforts to reach out to this growing and increasingly decisive electorate.

De la Garza: Individually, the great majority have little at risk because their constituencies include few Latinos. If this leads to a Democratic resurgence, then they will have contributed to returning the Republican Party to minority status. Republicans have long been divided, with those dependent on low-cost labor supporting immigration even if it is unauthorized, and cultural conservatives and nativists who have long opposed nonwhite immigration.  What must be emphasized is that Latinos are not a significant part of the Republican constituency. Voting against the DREAM Act will solidify the long-standing pattern of Latino support for Democrats, which in the long run may do serious damage to the Republican Party.

Q: If the effort fails, how much of the blame will Latino voters assign to Democrats and President Obama, especially going into the 2012 presidential campaign?

Vargas: Latinos certainly remember the president's promises to make comprehensive immigration reform a priority, and the lack of success is a significant complication for him. However, his visible and public push for the DREAM Act since the November elections is also being noticed by Latinos.

De la Garza: Obama is protected from feedback because of his strong support and the support of the Democratic House and the Senate, especially in the person of Harry Reid.

Q: Would this, as opponents say, act as a magnet for more people to enter the United States illegally so that their children could get an education?

Vargas: Of course not. It would not apply to future undocumented immigrant children. What Congress needs to do is address the broken immigration system so that we do not further exacerbate the problems with our immigration system and not create such populations in the future.

Q: What happens now, with the House having passed the act but the Senate very unlikely to follow suit? Is the DREAM Act dead for next two years?

Vargas: It is my hope that the new leadership in the House will recognize its duty to fix our broken immigration system and demonstrate the courage necessary to address it. The DREAM Act is a component of comprehensive immigration reform.

Q: What does action on this bill suggest for the future of comprehensive immigration reform?

Vargas: Until Congress and the White House address the broken immigration system, the issue will never go away.

De la Garza: Nothing other than increased militarization and roundups is likely to be legislated.