Accessibility links
Doctors Urge Cholera Vaccine For Haiti, Neighbors Medical authorities say one good reason to vaccinate broadly is that there is much more of the vaccine available than previously thought. Also, the strain of cholera is particularly deadly. Experts say it may be prudent to vaccinate, not just on Hispaniola, but throughout the Caribbean. 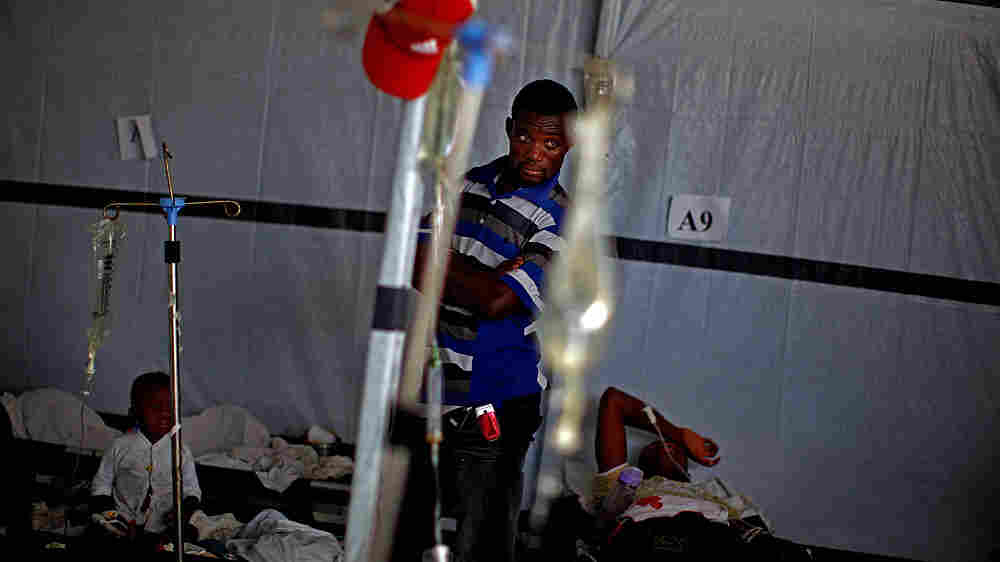 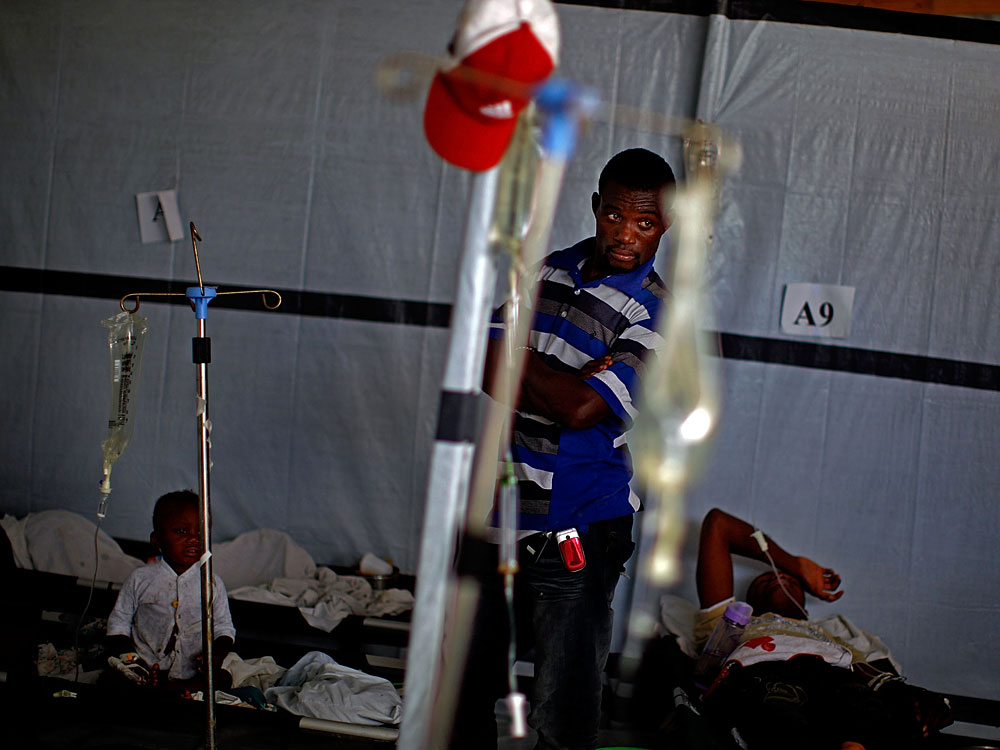 A man looks over a room of cholera victims in Port au Prince, Haiti, Dec. 10

Leading public health officials and researchers are calling for a crash vaccination campaign against cholera in Haiti and neighboring countries.

A vaccine is needed, they say, to control what researchers say is a more lethal strain of cholera circulating widely in Haiti and starting to affect the Dominican Republic.

Until now, experts felt that there wasn't enough vaccine to be effective and that a vaccination campaign would distract from efforts to treat the thousands with the disease.

But a consensus is emerging around the idea that the vaccine is urgently needed.

One factor behind the shift: The Pan American Health Organization has discovered far more vaccine is out there than previously thought.

Dr. John Andrus, deputy director of PAHO, tells NPR that there may be more than 1 million doses in manufacturers' storehouses.

"That's new information to us and that basically changes our thinking," Andrus says.

Cholera has infected at least 100,000 people in Haiti over the past seven weeks and killed more than 2,100. But that's only a fraction of what health officials predict in coming months.

About two dozen cases of cholera have been confirmed in the neighboring Dominican Republic, which shares the island of Hispaniola with Haiti. Some 208 more cases are under investigation. They are in the rural border area and in urban Santo Domingo, an ominous indication that cholera is already widely dispersed in the Dominican Republic.

Both countries should be considered for a vaccination campaign, Andrus says. But he wouldn't limit it to Hispaniola.

"I see a real opportunity to vaccinate vulnerable groups in countries that have yet to see the outbreak but we know would be very vulnerable if cholera was imported," Andrus says. "I worry about some of the poorer countries of the Caribbean. I worry about Central America."

He would also consider vaccinating people traveling to these areas if they are living in countries where cholera outbreaks already going on.

Another factor leading to the emerging call for vaccination are new studies out this week showing the Haiti strain appears to be more lethal than first thought.

"Nearly half of the people who died, died outside of the hospital, before they got to the hospital," says Dr. Thomas Frieden, director of the U.S. Centers for Disease Control and Prevention. "They die in as little as two hours after first becoming ill with cholera."

The CDC says the death rate in Haiti is 12 times higher than it was in a cholera epidemic that hit Peru in 1991. That epidemic spread to many countries in the Western Hemisphere — though strangely not to the Caribbean.

The death rate is going down in Haiti, Frieden says, but he warns that there are discouraging signs from the new studies that the disease will persist in Haiti for many years to come.

Meanwhile, Harvard researchers announced Thursday that they have worked out the entire genetic code of the Haitian strain. Their findings appear in the New England Journal of Medicine.

They also found that this strain of Vibrio cholera produces a toxin that's genetically identical to the toxin produced by an especially lethal strain of cholera that popped up in India four or five years ago.

That explains why the Haitian bug can kill so fast, says Dr. Matthew Waldor of Brigham and Women's Hospital, who led the research. 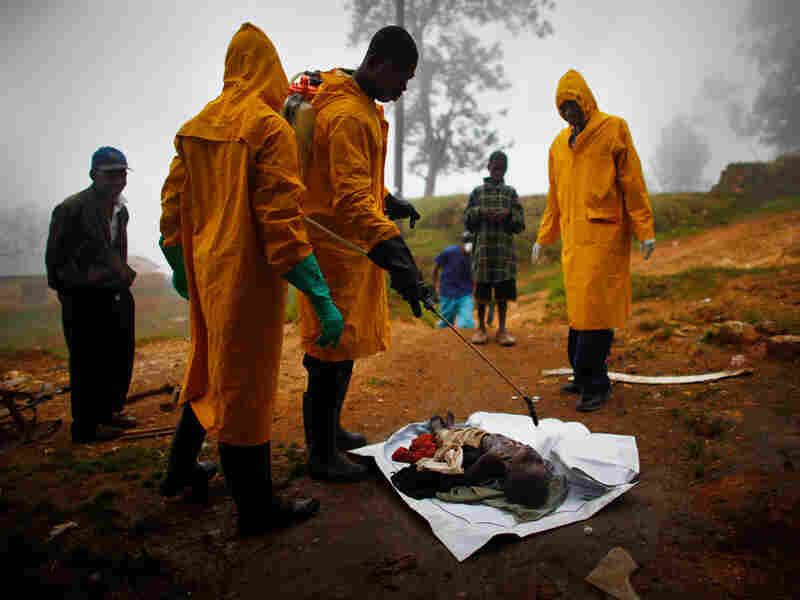 Body collectors spray bleach on a 3-year-old boy's body after he died from cholera in Petionville. Cholera is claiming the lives of hundreds of people while thousands of people are hospitalized across Haiti with symptoms including serious diarrhea, vomiting and fever. David Gilkey/NPR hide caption 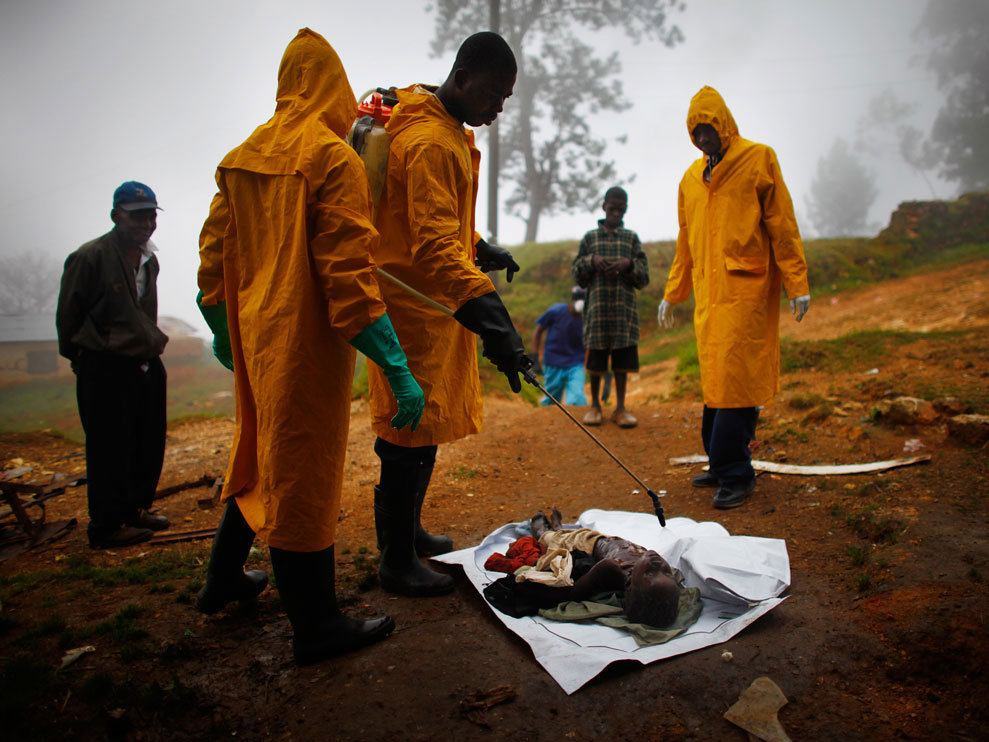 Body collectors spray bleach on a 3-year-old boy's body after he died from cholera in Petionville. Cholera is claiming the lives of hundreds of people while thousands of people are hospitalized across Haiti with symptoms including serious diarrhea, vomiting and fever.

The Haiti strain is also has a missing string of genetic material in the same place as the Indian strain.

It proves the new cholera bug was imported to Haiti from South Asia, Waldor says, probably inside the body of a traveler who was infected but not sick.

The Harvard group can't say if this person bringing it in was a soldier from Nepal in a U.N. peacekeeping force, as many Haitians believe. Waldor says there's no point in playing a blame game.

"Whether it was a Nepalese peacekeeper, or a Bangladeshi, or an Indian relief worker in Haiti, I think the evidence is strong that it was introduced by human activity into Haiti," he says.

"That's a more important conclusion because then we can take action in the future to prevent that."

He agrees that it's time to seriously consider vaccinating people who live in Haiti and the Dominican Republic, not only to save lives there, but to prevent the spread of this new strain to other countries in the region.