Accessibility links
Fresh Air Remembers Saxophonist James Moody The jazz saxophonist and flutist died Thursday at age 85. Fresh Air remembers the musician, whose 1949 improvisation over "I'm in the Mood for Love" became a jazz staple, with highlights from a 1996 interview. 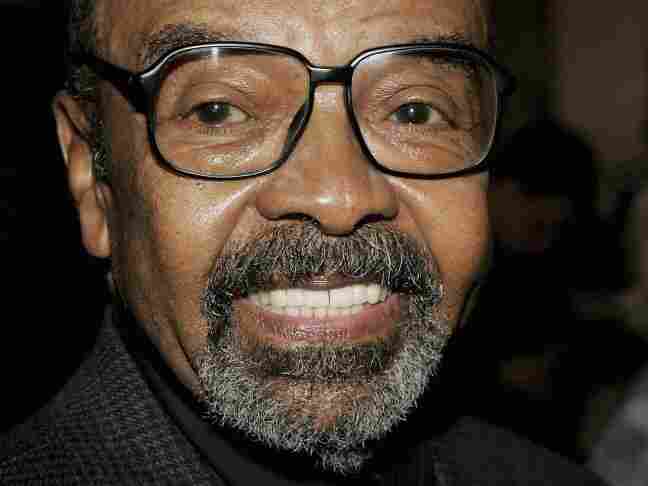 Jazz saxophonist and flutist James Moody, who began his career playing bebop with Dizzy Gillespie's Big Band and recorded for more than 60 years, died Thursday. He was 85.

That song began, "There I go, there I go, there I go..." and became a standard for both Moody and other jazz singers. In a 1996 interview on Fresh Air, he described the impact "Moody's Mood" -- which was named to the Grammy Hall of Fame in 2001 -- had on the rest of his career.

Moody began his career in 1947, in the early days of bebop, playing with Dizzy Gillespie's Big Band. By the end of the '40s, he'd left the group and moved to Europe. He returned to the U.S. in the early '50s to lead his own band -- and played with Gillespie again for much of the '60s. But in the '70s, Moody left the jazz scene to work a steady job in a Vegas hotel band. When he returned to the jazz world in the late '70s, critic Gary Giddins wrote that "there were few living musicians [he] enjoyed hearing perform more than Moody."

In 1998, the National Endowment for the Arts named Moody a Jazz Master. His last album, Moody 4B, was released in 2010.

"I'm not as concerned with my voice as I am with my lisp that I have, you know, because I'm partially deaf.  And I was born that way, and it doesn't mean that I have a speech impediment; it's just that I don't hear S's.  My wife always tells me, when I'm singing "Mood for Love," I'd say, 'You give me a smile,' and it sounds like you're saying, 'You give me a mile.' "

On Serving In The Air Force In A Segregated Unit

"I was 18 years old, right, and I was living in Newark, New Jersey. Do you know that the German prisoners of war used to come into town and jump off the truck, you know -- with the PW on their back and those hats -- and go into the restaurants and eat and we couldn't?"

On Being In The Room When Dizzy Gillespie Died

"There were five of us in there with him when he passed. And you know what's funny?  I told [another person in the room], I said, 'You mark my word, 10 years from now, there are going to be 50 people in the room with Dizzy Gillespie,' you know?  You know?  And there was no music playing.  There was nothing.  I mean, Diz was just -- he was just sitting there but, you know, trying to breathe deep, trying to get his breath.  And his eyes were closed, you know what I mean?  And, yes, he never opened them, and finally he took the last one and that was... yep, that was it, man."