Accessibility links
Morrison In Miami: The Doors' Manzarek Tells The Story Decades after he died, rock icon Jim Morrison has been pardoned for a 1969 incident in which he was accused of indecent exposure. In 1998, Doors keyboard player Ray Manzarek recalled what he saw happen that night in Miami. 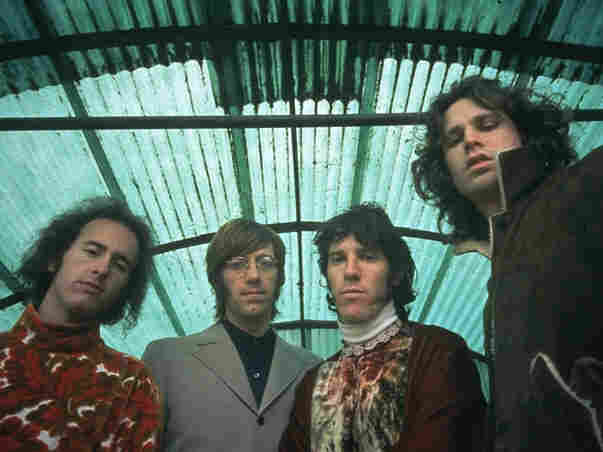 It will forever remain a pivotal moment in rock 'n' roll history -- but the reality is, it might not have happened.

Florida's clemency board conceded this week that there was inadequate evidence to convict Doors singer Jim Morrison of indecent exposure at a Miami concert in 1969.

The incident and its aftermath sent Morrison and the group into a tailspin that ended with Morrison's death -- though the legend is alive and well.

So what did happen? Doors keyboard player Ray Manzarek was onstage that night. In a 1998 interview on Fresh Air, he recounted the events leading up to the incident, which resulted in Morrison's arrest and conviction and the cancellation of many Doors concerts.

"We're in Miami. It's hot and sweaty. It's a swamp and it's a yuck -- a horrible kind of place, a seaplane hangar -- and 14,000 people are packed in there, and they're sweaty," Manzarek said. "And Jim has seen The Living Theater [a theater group that experimented with breaking down the fourth wall and confronting the audience] and he's going to do his version of The Living Theater. He's going to show these Florida people what psychedelic West Coast shamanism and confrontation is all about."

Manzarek described how Morrison took his shirt up in front of the crowd and asked if they wanted to see even more. The crowd did.

Manzarek described how Morrison then asked the audience to come even closer.

"And they started coming down on a rickety little stage, and the entire stage collapsed," he said.

Ray Manzarek's memoir, Light My Fire: My Life with The Doors, was published in 1998.