Accessibility links
'War On Christmas' Spreads To Lincoln Tunnel Holidays are time for traditions, and one of the biggest American holiday traditions is arguing about religion. This year, the season's biggest religious controversy is in an unlikely place. 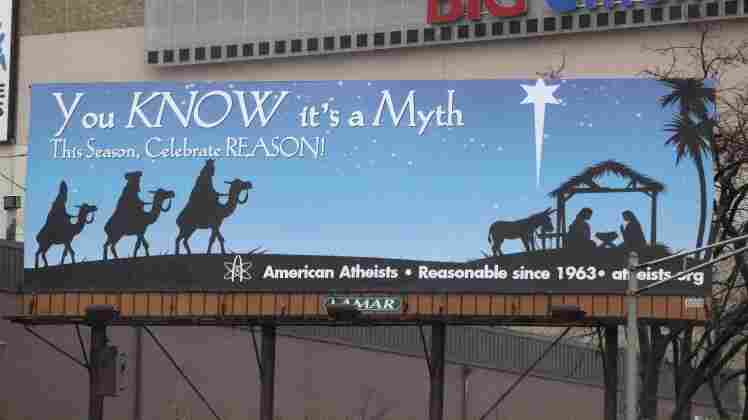 The billboard sponsored by American Atheists near the entrance to the Lincoln Tunnel in North Bergen, N.J. Seth Wenig/AP hide caption 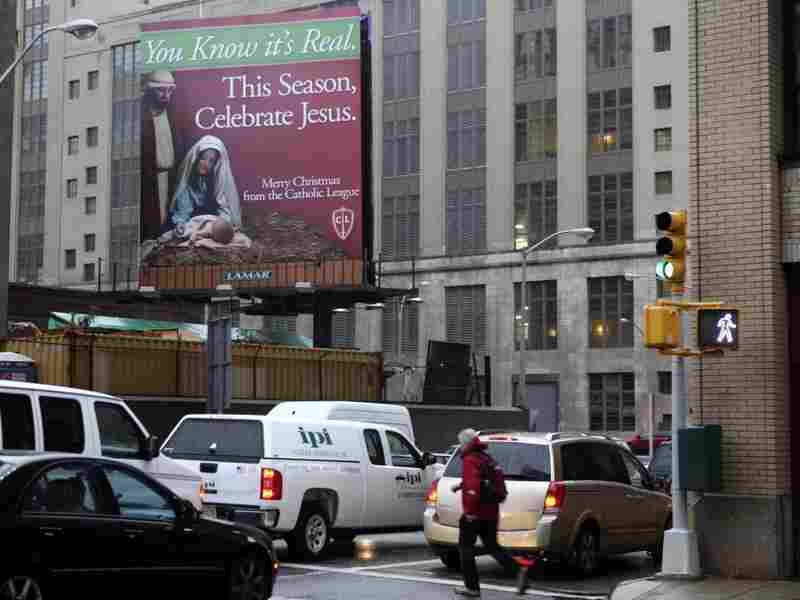 The billboard sponsored by the Catholic League near an exit of the Lincoln Tunnel in New York. Seth Wenig/AP hide caption

Holidays are time for traditions, and one of the biggest American traditions this time of year is arguing about religion.

Some years, a community is torn over a manger on the lawn in front of city hall or a missing menorah.

This year, the season's biggest religious controversy is in an unlikely place: the Lincoln Tunnel connecting New Jersey and New York.

For the last three weeks, New Jersey commuters entering the tunnel have had to sit in traffic and contemplate the sight of a billboard with a picture of a nativity scene, a star and three wise men. Its message: "You know it's a myth," courtesy of a group called American Atheists.

Drivers can mull over this challenge for the few minutes of purgatory it takes to cross under the Hudson River. Once they make it through the tunnel into New York, however, they'll encounter another billboard, this one from the Catholic League.

It's the same nativity scene, but this time with a retort: "You know it's real."

A War On Christmas Or A Cry For Attention?

If this modern-day media crusade alarms any drivers, I had trouble finding them. Most people don't seem to even notice the billboards. I found one lost tourist, Tom Price, who did -- but he wasn't impressed.

"Well, I think it's almost pathetic really," Price said. "Two people have different views -- there shouldn't really be a problem. They've got better things to worry about than that, haven't they?"

Well, it depends on your goal. American Atheists got precisely what they wanted -- publicity.

The billboard was cheap for what they got. The moment it went up, the media was drawn to it like the Star of Bethlehem. It got Silverman booked on talk shows and attacked in newspaper columns.

And how did he feel when the Catholics put up their response billboard? "Ecstatic."

All of a sudden, Silverman was on cable news debating representatives from the Catholic League over whether or not there is a God. But why does an organization representing a worldwide church need to respond to a single billboard in New Jersey?

"This is the time of year that the secularists, these atheists, choose to assault our Christianity and our religion," says Jeff Field with the Catholic League. "We decided that we're not going to sit by and let that happen." No turning the other cheek this time.

"Even though it's made a lot of news throughout the country, and the American Atheists have received a lot of attention from this, it has shown people that we are here to be on the front lines -- they have somebody to put their trust in," Field says.

Getting In The Way Of That Giving Spirit

So let's recap: The American Atheists got weeks of free publicity. The Catholic League got to look tough. The media got their annual "War on Christmas" story.

And though no one wants to talk about how much money this will help each organization raise, Silverman from the American Atheists couldn't help but brag.

"We're selling bumper stickers and shirts with the billboard on them on our website," he says gleefully. "And people are buying it like crazy -- because they love it."

So it's a religious war with no losers -- except perhaps for the people who could have used the money that went into billboards. Under the Catholic one, at the exit to the Lincoln Tunnel, Fred Morrison panhandles.

He sleeps in Penn Station, but spends his days under the picture of the nativity scene, begging. What would he put on the billboard if he had a chance?

"I would say, 'To each his own -- you figure it out yourself,'" he says. The billboards definitely aren't putting people in the mood to give. "People don't have the spirit like they used to have."

A lot of Catholics and atheists could probably agree on that message.