Accessibility links
Walmart Shoppers: Homeland Security Wants You Starting this week, Walmart shoppers will be treated to a short video from Homeland Security chief Janet Napolitano, urging them to report any suspicious sights to local authorities. It's part of a wider program called "If You See Something, Say Something." 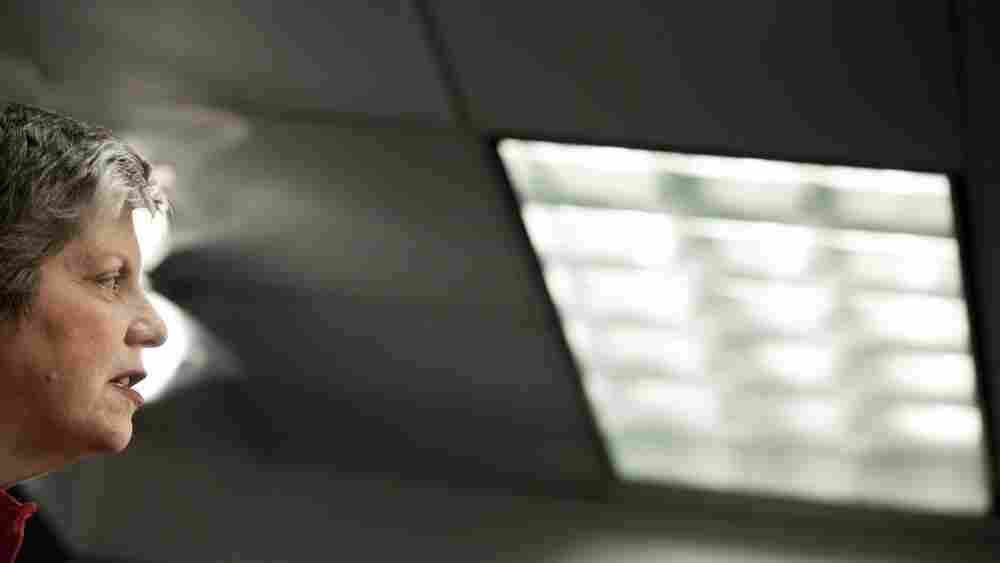 Secretary of Homeland Security Janet A. Napolitano speaks during a news conference on the "If You See Something, Say Something" campaign Wednesday in Washington, D.C. Brendan Smialowski/Getty Images hide caption

If you've ridden the subway in New York City any time in the past few years, you've probably seen the signs: "If You See Something, Say Something."

Coming Soon To A Walmart Near You

In Washington, D.C., Metro riders are treated to a recording of Homeland Security Secretary Janet Napolitano urging them to report suspicious sights to the proper authorities.

Now, Wal-Mart shoppers across the country will see Napolitano's message in a video as they stand in the checkout line.

"We are expanding 'See Something, Say Something' in a number of venues," Napolitano tells NPR's Audie Cornish. "It's Wal-Mart, it's Mall of America, it's different sports and sporting arenas, it's transit systems. It's a catchy phrase, but it reminds people that our security is a shared responsibility."

The "See Something, Say Something" campaign has had some major successes-- most notably earlier this year when a street vendor reported smoke coming out of an SUV parked in New York's Times Square, resulting in the arrest and conviction of Pakistani immigrant Faisal Shahzad. But The New York Times reports the program has resulted in relatively few terror-related arrests.

Homeland security expert Frank Cilluffo says that may be because the message is coming from Washington rather than local officials who are more trusted in their communities. 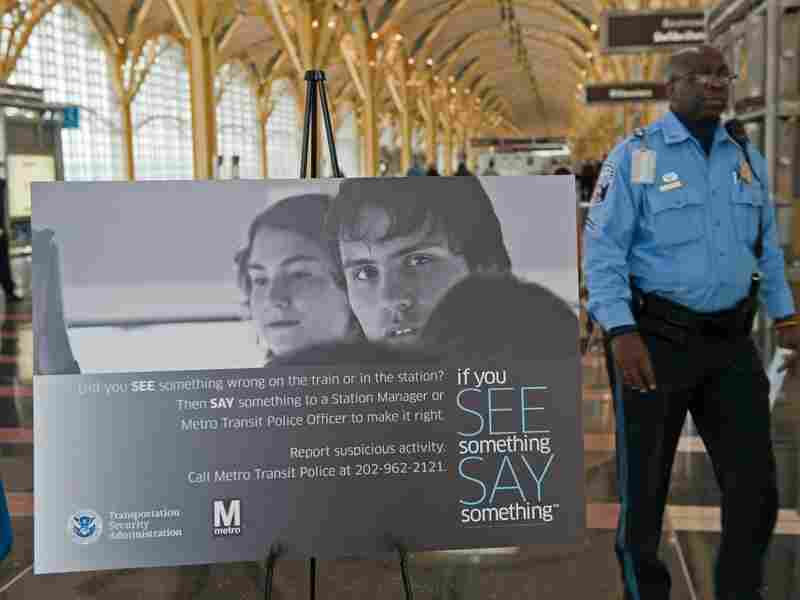 A sign promotes the "If You See Something, Say Something" campaign at Ronald Reagan National Airport in Washington, D.C. Paul J. Richards/AFP/Getty Images hide caption

"I think having Secretary Napolitano on screens throughout the country provides a bit of a creepy feeling," he says. "That shouldn't be from Washington."

Cilluffo also questions the simplicity of "See Something, Say Something."

"I think the message is long on nouns, short on verbs. I think we need some specificity," he says. "Ultimately, what are people looking for, what sort of suspicious activity, what actions should they take, and who do they specifically turn to?"

Cilluffo says Homeland Security officials should be constantly re-evaluating and changing their policies as they discover what works and what doesn't.

"Homeland security is not an end state, it's a journey," he says. "We've made some significant strides, but I think we still have more to do."