Accessibility links
In China, A Jailed Artist's Kafkaesque Journey Ahead of the Nobel Prize ceremony last week that honored jailed Chinese activist Liu Xiaobo, Beijing launched a crackdown on dissidents. The struggle for human rights is a personal quest for one Canadian woman seeking to gain her husband's release from a mainland jail. 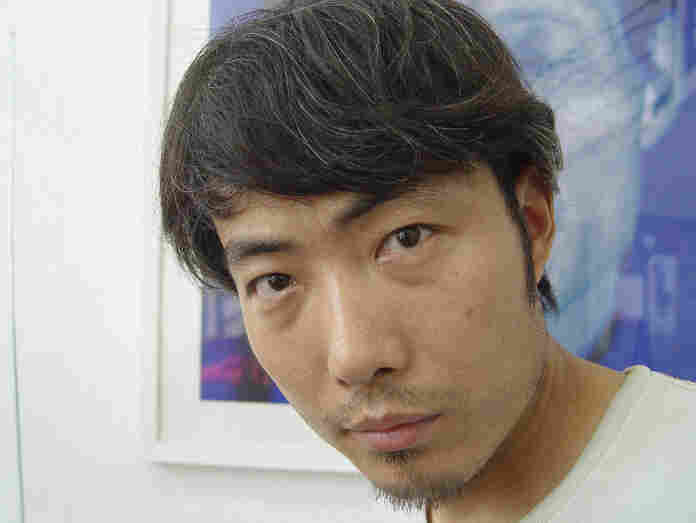 China's government has described supporters of this year's Nobel Peace Prize laureate, the jailed Chinese dissident Liu Xiaobo, as "clowns." It also has launched a sweeping crackdown on dissidents, many of whom are now under house arrest.

For one Canadian woman in Beijing, the struggle for human rights has come down to a personal quest: to gain her husband's release from jail.

The past seven months have been a Kafkaesque journey through China's justice system for Karen Patterson, who spends her days lobbying for her husband, artist Wu Yuren. In May, he went to a police station to help a friend file a complaint against his landlord. He hasn't been home since.

"The first three weeks I was being told by many people in the community this happens all the time in China," she said. She remembers them promising, "We'll get him out no problem."

Patterson says during his first day at the police station Wu was beaten by five police officers, who pulled his shirt over his head and held his arms behind his back, injuring his right arm. Later, charges of "interfering with public service with violence" were laid against the artist.

Patterson has only seen her husband twice in seven months: once during a serendipitous exchange through a window, and the other time in court. 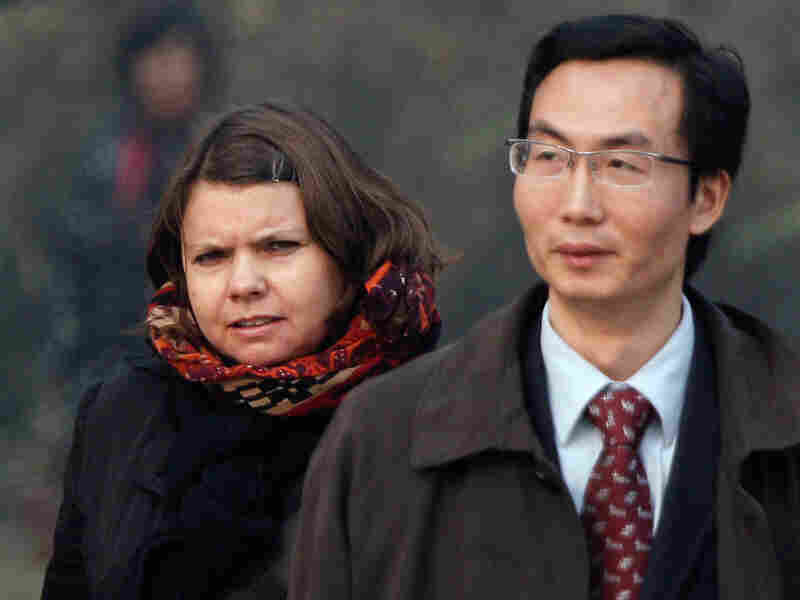 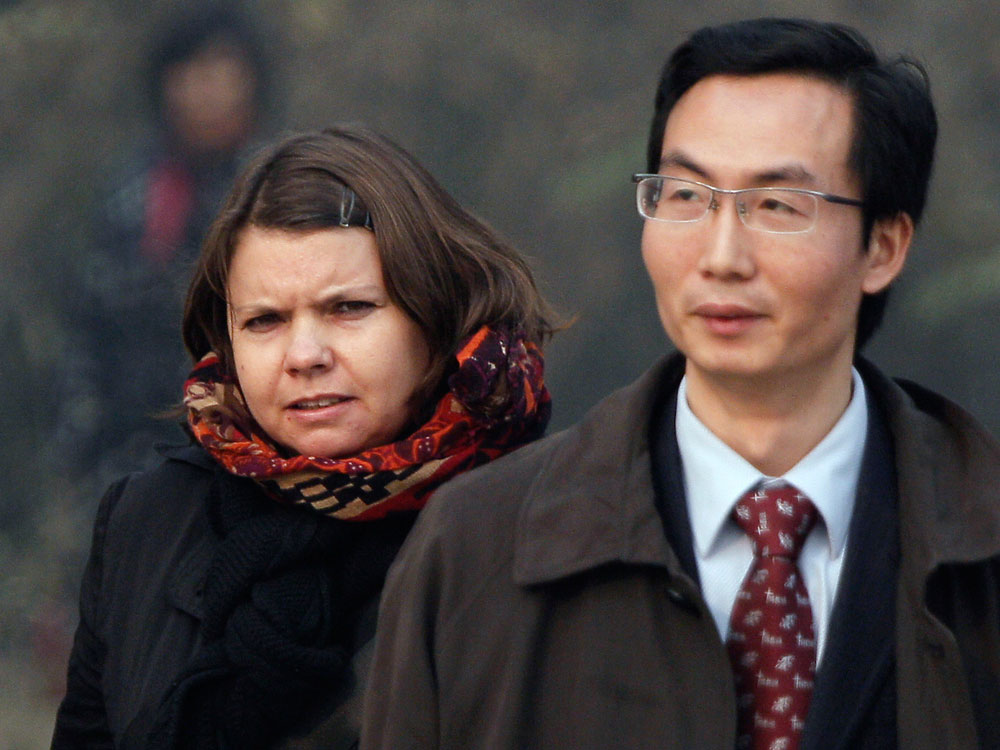 She says he denies the charges.

"My husband sticks to his story that he never hit a police officer, but apparently during the beating of my husband, one of the police officers injured his finger. So they're using that as supposed evidence against my husband. So it's a bit of a set-up," Patterson said.

She believes Wu is being punished for activism earlier this year. On Feb. 22, he organized a bold protest march along Beijing's most symbolic avenue -- Changan Avenue -- which leads to Tiananmen Square. He was leading a group of artists who had been evicted from their studios without proper compensation, and then were attacked by dozens of thugs.

The march passed peacefully. Later the police summoned Wu for questioning, then released him without charge. Wu also signed Charter 08, the declaration for democratic reform co-authored by Nobel laureate Liu Xiaobo. Thousands of people signed it, but Wu was among the early signatories.

Artist: 'China's Reality Is All About Politics'

Wu's trial on the "interfering with public service with violence" charge opened Nov. 16, on a bleak wintry morning. Outside the small courthouse on the far outskirts of Beijing, a crowd gathered to bear witness.

Among Wu's supporters was a bearlike figure in a black beanie hat and a salt-and-pepper beard -- Ai Weiwei, another Charter 08 signatory and one of China's most famous artists. He designed the Bird's Nest stadium for the Beijing Olympics, but he's become better known as an outspoken government critic. 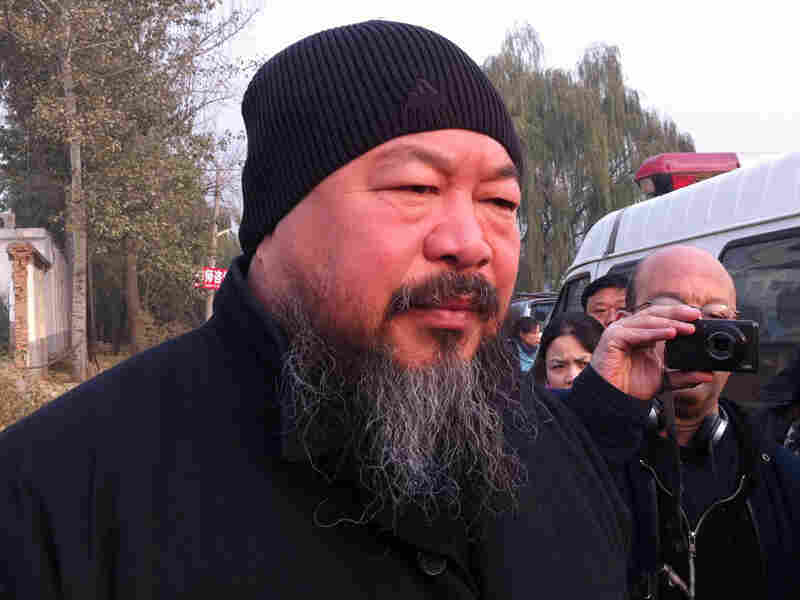 Noted Chinese artist Ai Weiwei joined protesters at the opening of Wu's trial. Ai also took part in the political march along Changan Avenue that Wu's supporters says is behind the charges against him. Ai says the case is a set-up.  "It's a terrible case," he says. Louisa Lim/NPR hide caption 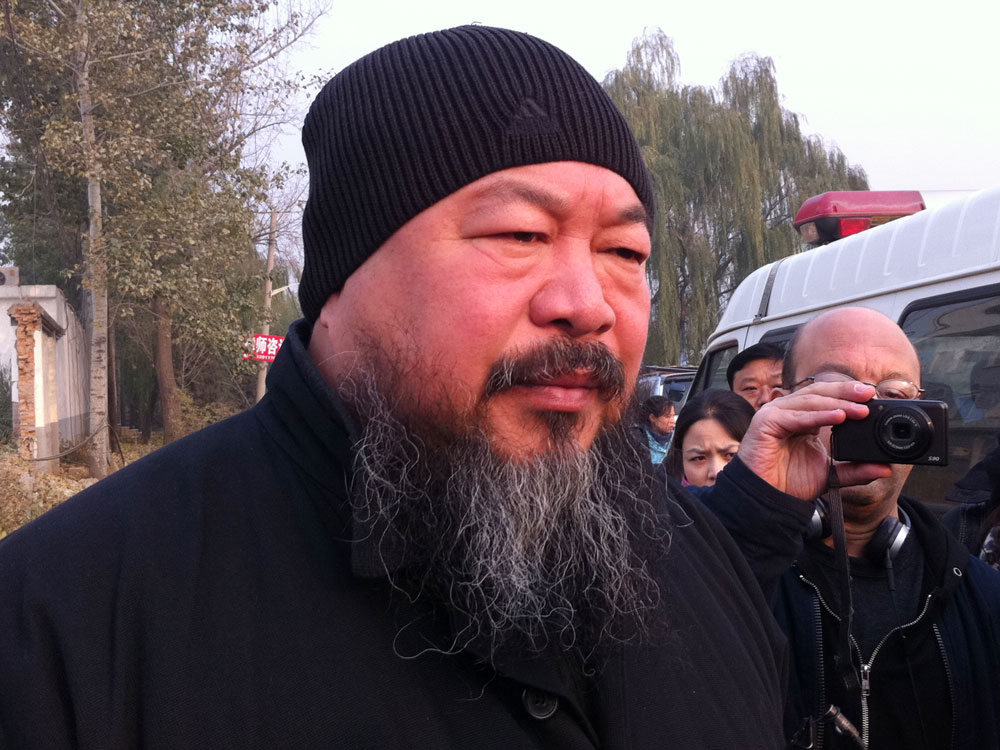 Noted Chinese artist Ai Weiwei joined protesters at the opening of Wu's trial. Ai also took part in the political march along Changan Avenue that Wu's supporters says is behind the charges against him. Ai says the case is a set-up.  "It's a terrible case," he says.

"I came to support [Wu] and to witness this very dark case when they just make up the evidence, and the judicial system is not independent and they just try to set him up, the police. This is a terrible case," Ai said.

Outside the courtroom, to the bemusement of locals, a kind of carnival of injustice was under way. Petitioners -- themselves victims of wrongdoing -- had turned out, and were openly singing songs of protest, including "Socialism Is Good," with the lyrics changed to include the words, "The Communist Party has a lot of corrupt officials."

The international media were filming them, as were the police and Wu's fellow artists. One of those filming turned out to be Gao Qiang, one of the Gao brothers, who are famous for their satirical political art.

"China's reality is all about politics," Gao said. "Politics is like air here, you can't get away from it. If artists want to face up to reality, they absolutely must confront political problems."

Another artist, Zhou Yongyang, has already crossed the division between art and politics. His earlier work includes "Pointing to the Sky, Cursing the Earth," a performance where he invited 100 villagers to curse corrupt government officials as they stood in front of a government billboard that advocated building a "harmonious society."

"We want to turn our art over to the petitioners," Zhou said. "They have all become artists -- everyone is making their own statement."

But for the protesters -- and for Wu Yuren inside -- this is no performance, but real life injustice. Wu's case has been adjourned, with the judge asking to see more evidence, an unusual step for a Chinese court case. No date has yet been set for a second hearing.

Even though he professes his innocence, Wu's Canadian wife now accepts that he won't be acquitted, since that's unheard of in China. She's been told he can expect a sentence of up to three years.

"It's a travesty," she said. "It's despicable that it's even gone this far. But it happens all the time."

Last week, a Beijing man named Bai Dongping was detained on subversion charges after posting a photo of the 1989 demonstrations online. In November, an Internet activist named Cheng Jianping was sentenced to labor camp for a year for a single satirical tweet.

Like artist Wu Yuren, these were people with a history of activism. That there's a price to pay for political activism in China is clear -- but at what point that price is exacted is something that nobody can guess.