Accessibility links
Latino Mayor May Be A Glimpse Of Things To Come The mayor of San Antonio, Julian Castro, is young, photogenic, well-educated and barely speaks Spanish. He may very well be the model of a new kind of Latino leadership. 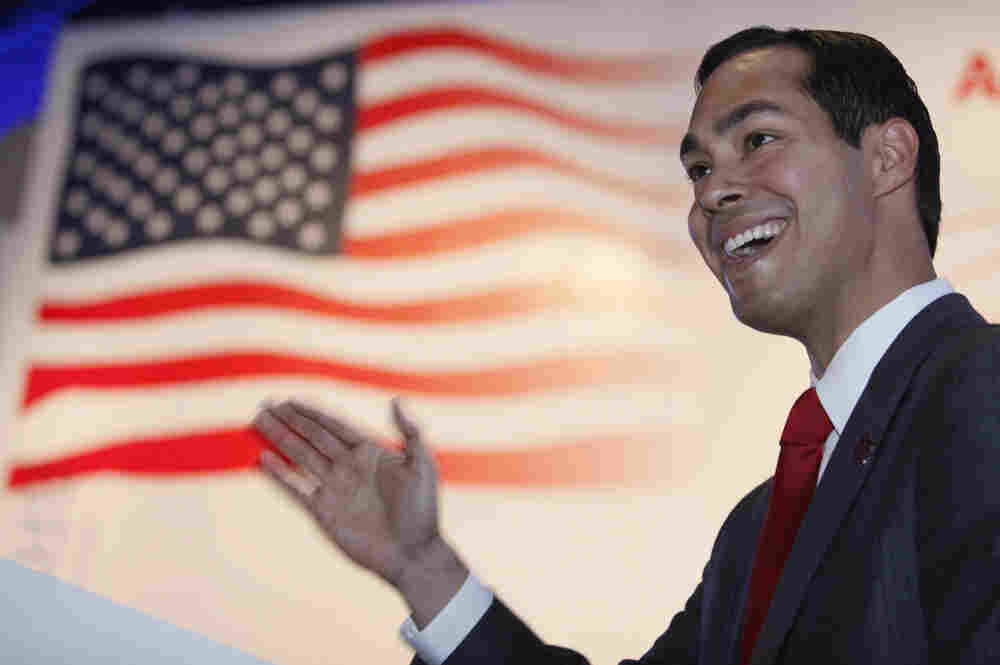 There's a good chance America will eventually look like San Antonio. Demographically, the Texas city is a glimpse into the American future -- a majority Latino community, where English is the language of choice.

The mayor of San Antonio, Julian Castro, is young, photogenic, well-educated and barely speaks Spanish. Yet he may very well be the model of a new kind of Latino leadership.

A Place In Mainstream America

The 36-year-old mayor is hard to pick out of a crowd. When he spoke at a rally for a San Antonio school bond issue earlier this year, Castro looked a lot like the young people he was addressing.

"We have an obligation, in this year 2010, to ensure that a whole new generation of young people has the best facilities, the best opportunity, to succeed in our schools," he said. "We need this bond issue for the future of our young people."

And that future is going to be hard to ignore. Every 30 seconds, a Latino turns 18 in America. That's just one reason to pay attention to San Antonio, where Latinos already are the majority. Like Latinos across the United States, San Antonio's Latinos are trying to figure out their place in mainstream American life.

"In the past few months, especially with what's happening in Arizona, it seems like there's a target on the back of many Latinos, and a casting-aside of their worth in the United States. And the first instinct is to pull up your fist and fight  back, but I don't think that's necessarily the right course," Castro says.

"I think the right course is to work with the community, to register voters, to take them out, to focus on the positive. And if you go out and vote, politicians are going to have to listen to you."

A Mother And A Mayor For Role Models

Castro and his twin brother, Joaquin, who now serves in the Texas state Legislature, were politicized at an early age by the example of their mother, Rosie Castro, a single mom and activist. She was a driving force in the Raza Unida Party of the '70s.

"I took him and his brother out to the polls all the time so that they could see me vote," she says. "They would sometimes come help deliver a sign at one of these houses.  In my generation, we were not at the public policy table. You had to insert yourself into the political realities. You had to go to city hall and demand things."

Today, Rosie's son sits at the head of the public policy table, at least in San Antonio.

"Julian is a new generation of Latino leader in an interesting sort of way," says Henry Flores, a political scientist and dean of the Graduate School at St. Mary's University in San Antonio. "He'll clearly tell you that two of his role models were his mother and Henry Cisneros. His mother, because it kind of gave him a sense of community and activism; and Henry Cisneros, because it showed a way to govern and a way to hold himself up in public."

Henry Cisneros served four terms as the mayor of San Antonio before serving in President Clinton's Cabinet as secretary of the Department of Housing and Urban Development.

"Rosie came up through the streets and was a community activist," Flores says, "but she came from the outside and was never accepted by the establishment, per se. Henry Cisneros was brought in by an Anglo establishment and eventually established himself."

A New Generation Of Latino Politicians

"Rosie and Henry kind of laid the groundwork for [Castro's] arrival, and in an electoral sort of way, in a participatory sort of way, he represents a third wave of Latino politicians," Flores says. Castro seems to agree.

"You do have plenty of folks at the school board, the City Council level, the mayoral level, the representative and senator level, who are a new generation of Latinos, that are well-educated, that can make policy and debate with the best of the folks around the  nation," he says.

Hopefully they won't forget that legacy, Castro continues, but also adapt to the "America of 2010."

"Make policy that's gonna help Latinos, yes," he says, "but also then help everyone that they represent."