Accessibility links
As Newborn Heart Surgery Improves, Survivors Thrive A condition where the baby's left ventricle fails to develop used to be a death sentence for newborns. But surgical advances have greatly improved the chances of survival of hypoplastic left heart syndrome, and now some born with the defect have reached their 20s and 30s. 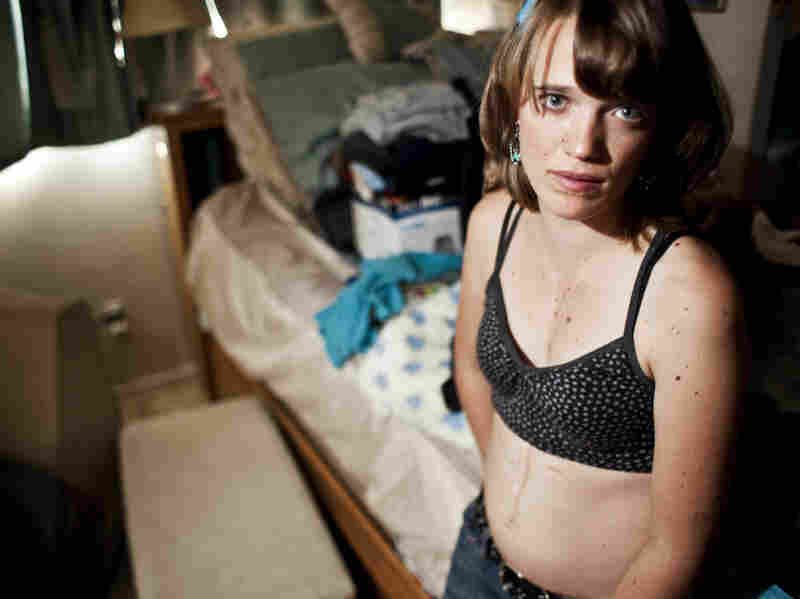 As a child, Jeni Busta always won the prize for the longest scar. It's almost invisible, but it stretches from her neck to her belly button. She is one of the oldest survivors of a risky heart operation. Dennis J. Provost for NPR hide caption 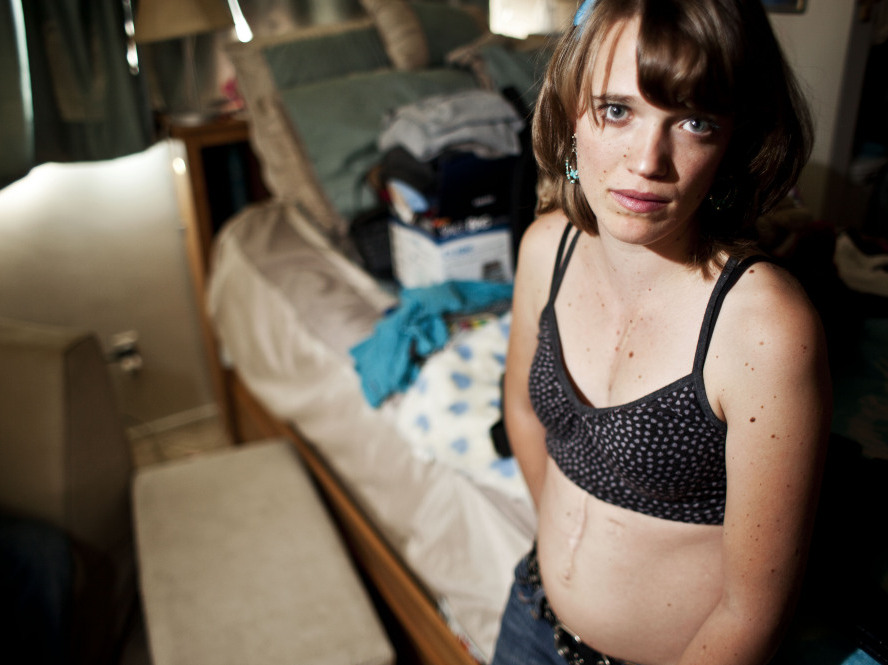 As a child, Jeni Busta always won the prize for the longest scar. It's almost invisible, but it stretches from her neck to her belly button. She is one of the oldest survivors of a risky heart operation.

Jeni Busta, 25, dots all of her "i's" with a heart. It may seem silly at first; but when you understand why a heart figures so prominently in Jeni's young life, you realize the poignancy of her penmanship.

Jeni is one of the earliest long-term survivors of a risky operation first performed 29 years ago that rebuilds the tiny walnut-sized heart of a newborn. She doesn't remember any specific time when her mother told her she had half a heart.

Doctors don't know what causes this rare congenital defect, called hypoplastic left heart syndrome, or HLHS for short. In utero, the left side of the heart does not develop properly. The mitral and aortic valves, the first part of the aorta itself, and the left ventricle of the heart are small, underdeveloped or nonexistent.

The most critical defect in HLHS is the left ventricle. In a normal heart, this chamber is powerful and muscular, pumping blood throughout the body. When the chamber is small and poorly developed, it's unable to adequately pump blood. Therefore, the body does not get the blood flow it needs to survive.

When Jeni was born, most children with this heart defect died. And, at the time, Jeni's mother, Jill Sorensen, was given three options: She could provide palliative and comfort care at home, and her baby would likely die within one week. She could hope for a heart transplant, even though it's extremely rare to find a donor heart for a newborn. Or, she could allow Jeni to undergo a risky new surgery called the Norwood procedure where the surgeon literally rebuilds the heart in order to enable its right chamber to do the work for the nonfunctioning left chamber.

Sorensen was in luck. Because she was a patient at the University of California, Los Angeles, Sorensen had access to the Norwood procedure. A young pediatric heart surgeon, Hillel Laks, was among the few doctors nationwide who was performing the surgery.

The procedure is incredibly complex and precise — and high-risk. Surgeons use part of the existing aorta and pulmonary artery to create a new pathway in the heart to redirect blood into the working right ventricle. At the time Jeni had her surgery, survival was unlikely. Only one in 10 newborns survived.

"Even the ones that did survive did not have very good cardiac function, and therefore many would die later on," Laks says.

Jeni turned out to be one of the first survivors of the Norwood procedure. Then, at 3 years old, her heart slowed to dangerously low levels, and, like about 10 percent of other Norwood patients, she needed a pacemaker. Her system relied so heavily on the pacemaker, it lasted only seven years. Today, she's on her fourth pacemaker. Her heart functions at about 70 percent of normal capacity.

While that means she can live something of a normal life, daily activities are curtailed. Jeni is often tired and out of breath. She says she always knew she had to be careful and needed to just stop when she got tired. She knew she had to take care in school and try not to get sick. Because infection can easily spread to her heart, Jeni describes herself as "germ-phobic" — she is always washing her hands and often uses a paper towel between her hands and a doorknob.

College proved too demanding, and so did a job. Jeni can't stand or sit for more than an hour without getting breathless. She can't participate in endurance sports, but she does exercise to strengthen her heart. Today, she rides a bike at least once a week with her husband.

Jeni seems to flourish within the context of her life. And she relishes her unique achievements, like being one of the first patients with this heart defect to live long enough to "graduate" from a pediatric heart doctor to an adult cardiologist. 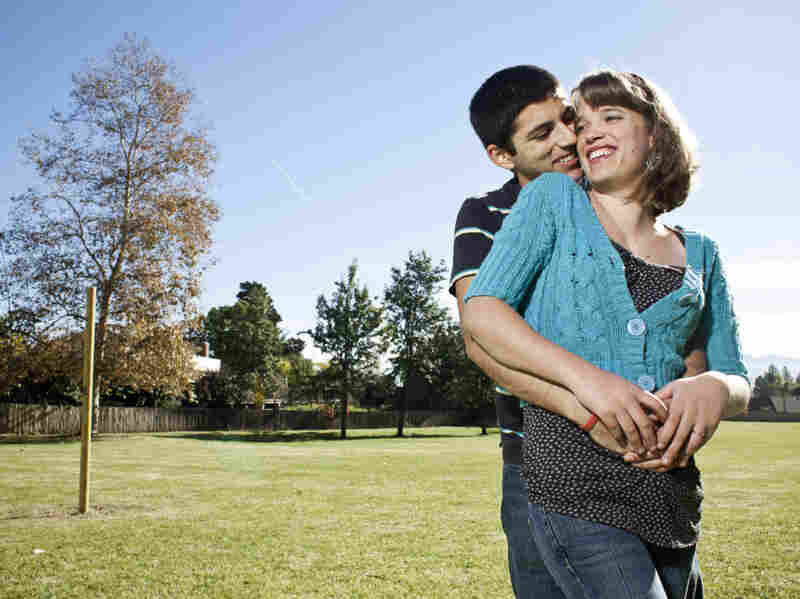 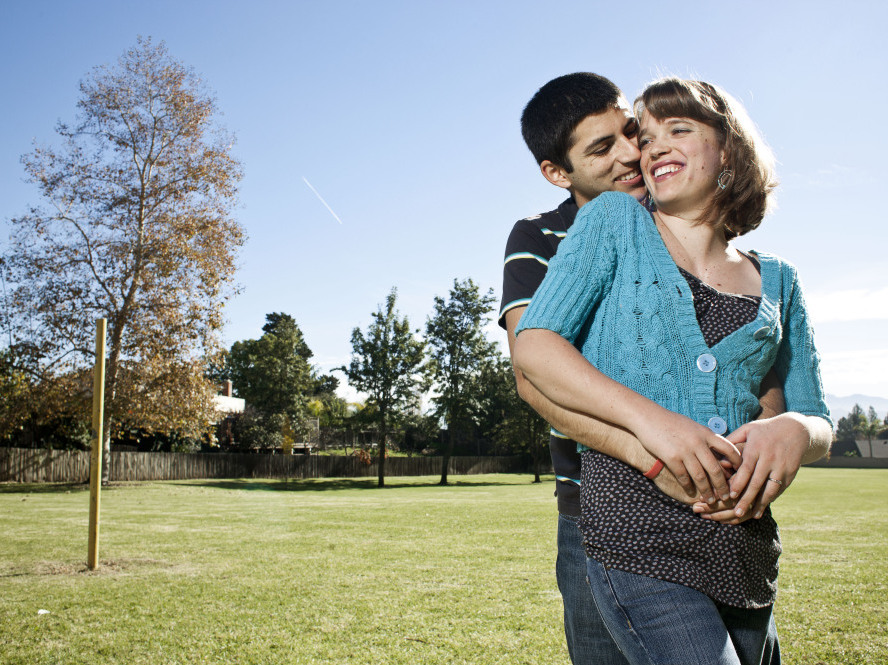 Jeni Busta can't participate in endurance sports, but her husband, Nick, is a running coach who competes in Ironman triathlons. "Jeni's the real ironman," Nick says.

"It's a day I'll never forget," says Jeni, "because I made it this far and it's a definite possibility I could live a long and healthy life."

"Jeni's the real ironman," Busta says. "To be able to live with something so life-changing and difficult and to be able to do it with such grace and poise — and to have such an amazing outlook on life while doing it — that takes real strength."

Doctors have told Jeni her heart isn't strong enough to have children. So she and Nick talk about adopting a child with a heart defect. Because she can't work a routine job, Jeni volunteers for heart patient organizations. She has addressed the American Heart Association and currently volunteers with Camp del Corazon, a nonprofit organization that provides year-round experiential opportunities and a residential summer camp for children ages 7 to 17 who face the challenge of growing up and living with heart disease.

No Longer A Death Sentence

Jeni says she wants others to know that a happy, nearly normal life is possible even after suffering a congenital heart problem. And today, advances in surgical technique and medications have dramatically boosted survival rates following the Norwood procedure. Nationwide, survival is now around 80 percent. Survival at 5 years of age following all three surgeries is 70 to 75 percent.

At academic medical centers and hospitals that routinely perform the surgery, survival is even higher. Brian Reemtsen, chief of congenital heart surgery at UCLA, says survival rates at UCLA today are as high as 95 percent.

"All heart surgery is improving," Reemtsen says. "I think one of the biggest advances in this is not only the technical part of the operation but also taking care of these kids."

Even so, it's a risky surgery, he says. And not only is the surgery complex, Reemtsen says, but post-operative care can be equally challenging.

"It's difficult to care for patients afterward," he says. "They are very unstable, and the intensive care team has to be in the room for the first few days with them. They are delicate and fragile. If we do a good surgery, we give them a good start but there is still a lot to do."

While these children are certainly given a chance at life, Reemtsen says, it's important to remember that the surgery does not restore the heart to normalcy. 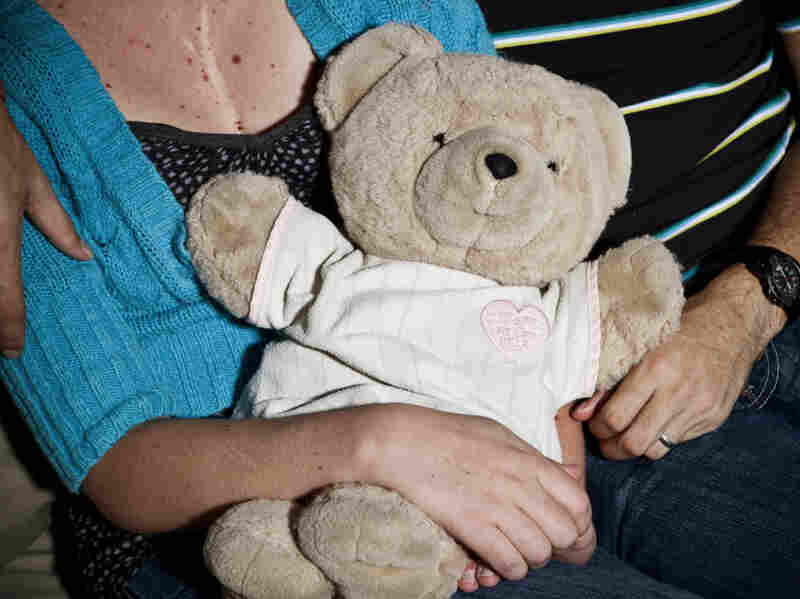 Jeni Busta holds her "Heart Bear," which she was given when she was born. The scar on Jeni's chest is from her many surgeries. Dennis J. Provost for NPR hide caption 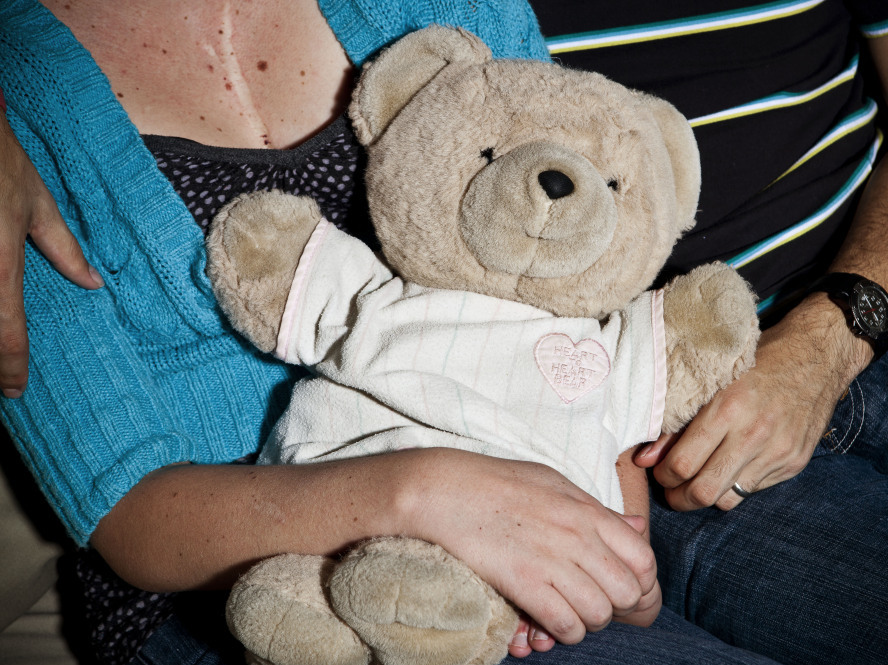 Jeni Busta holds her "Heart Bear," which she was given when she was born. The scar on Jeni's chest is from her many surgeries.

"You haven't made the heart better. You've made it able to work with what it's been given," Reemtsen says.

Life expectancy for Norwood procedure patients like Jeni Busta remains unknown. It's not clear whether their hearts will endure into their 50s and 60s, or whether they'll need heart transplants.

"This is a relatively new surgical procedure," Reemtsen says. "And history is being written as we speak."

Doctors are now performing experimental surgery on a fetus to repair the problem that causes hypoplastic left heart syndrome. If successful, the surgery would prevent this heart defect from developing in the first place.

But already, Jeni symbolizes a milestone. As her mother says, she's a survivor.

An earlier edition of this web story incorrectly stated that in the early days of the Norwood procedure "one in ten babies died." In fact, at the time Jeni had her heart surgery "only one in 10 newborns survived."