Accessibility links
To Warm The Homeless, A Coat That's A Sleeping Bag If you look at a house under construction, you'll likely see Tyvek, a white insulating wrap. In Detroit, an art student is using it to help homeless people stay warm. Her hybrid coat/sleeping bag is getting a boost from a well-known clothing company. 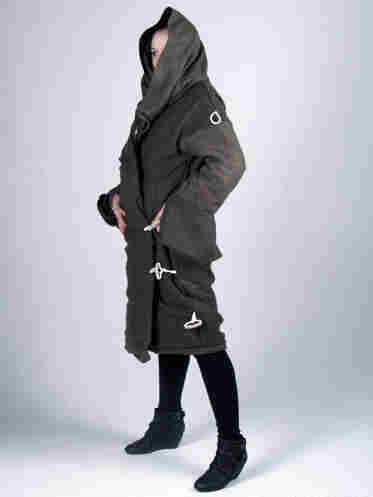 A woman models a prototype of the Elements S[urvival] coat, which can transform from a winter coat to a sleeping bag. Ruby Troyano hide caption

If you look at a house under construction these days, you'll likely see Tyvek, a paper-thin, white insulating wrap. But in Detroit, an enterprising art student is using the plastic-like home insulation in a different way -- to help homeless people stay warm.

The idea seems simple enough: Design a product that keeps the wind out and heat in. How about an inexpensive jacket that quickly turns into a warm sleeping bag? A casual review of this holiday's catalogs reveals no such product. Enter Veronika Scott, a student at the College for Creative Studies.

Instead of designing cars or consumer appliances, as is more typical at her school, the junior, 21, has come up with a product that will be made by and for Detroit's homeless.

It began as a class assignment. Scott says she looked for something people living on the street desperately needed.

It took months of conversations with homeless people, Scott says, for her "to finally realize what their need was. And that was heat, and pride."

Usually, a design project would end there: A need is identified; a product is designed; and a grade issued. But Scott isn't stopping. She spent around $2,000 of her own money to construct several prototypes of her coat, called the Element S(urvival).

"I have designed high-end electronics, and I may go back to that," she says. "But right now, I personally don't feel I should be designing that right now. In this economy, there is a lot of different needs that aren't going to be solved by a new cell phone."

As Scott puts on one of the coats, it's clear that fashion takes a back seat to function.  But then again, it doesn't have to look pretty -- it just has to work. 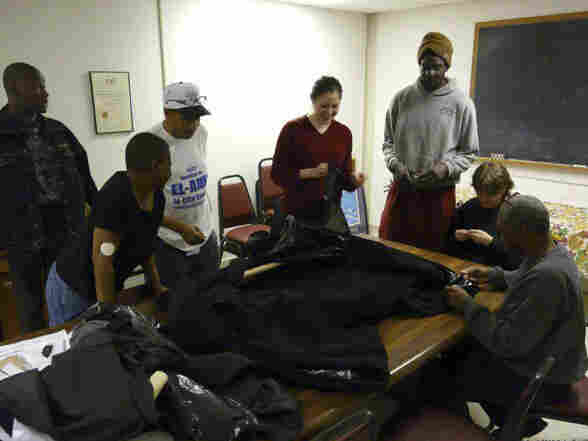 And work it does. Within a few seconds of putting on the coat indoors, Scott starts to sweat.

The coat is made from materials designed for other purposes -- the Tyvek home insulation and wool army blankets.

By using these low-cost materials, Scott hopes to offer the coat for free. To get to the production phase, she's relying on Carhartt, an apparel company whose heavy-duty work clothes are a fixture of daily life for many Americans.

"She's probably spent hundreds of hours putting this product together for the end user," says Carhartt CEO Mark Valade. "It's pretty incredible for a 21-year-old."

After meeting with Scott, Valade donated industrial sewing machines and materials for her project.

"As we walked her downstairs and showed her some insulations, some outerwear," Valade says, "she knew exactly what she wanted."

With Carhartt's help, Scott hopes to have an assembly line up and running in a few months. She's hoping the coats will provide both warmth and a paycheck to those who will ultimately wear them.