Accessibility links
Corporations Are Drawn Into WikiLeaks Controversy Some corporations doing business with WikiLeaks ended their associations when the group drew governments' ire. Now advocates for free expression on the Internet say they are worried that corporations can censor public speech as easily as governments. 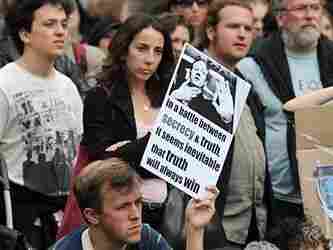 Many private businesses have been drawn into the ever-widening whirlpool that is WikiLeaks. So far, attempts to stop it from revealing more classified information have been fruitless.

As more online companies grow fearful of the controversy, they are cutting themselves off from WikiLeaks and its supporters. Some observers say it is a sign of the growing power of corporations to censor the Internet.

MasterCard, Visa and PayPal all stopped processing donations to WikiLeaks. Jennifer Stalzer of MasterCard said the situation was just too sticky.

"Given the serious nature of allegations and broad concerns raised by many regarding the activities of this organization, we believe it was prudent to suspend acceptance, and that's what we've done," Stalzer said.

Amazon pointed to its terms-of-service agreement when it threw WikiLeaks off its servers.

Clay Shirky, who teaches in the Interactive Telecommunications Program at New York University, says terms-of-service agreements give these companies too much power.

"Every corporate counsel at every large organization is basically paid to write a Web terms of service, which reads: "We can do anything at any time with no announcement and no recourse," he said.

There are people who should demand of Twitter, 'What are you doing? Since when are you in the business of deciding who is and who isn't a good civil disobedience movement?'

If you have ever signed up for any Web service, including PayPal, Facebook, Amazon, iTunes, Twitter and Gmail, you have accepted a terms-of-service agreement.

Shirky says "we get a world where, basically, if you can make any kind of speech, just be too much of a hassle, it can be taken off the Internet."

He says a perfect illustration is what happened to the hackers who support WikiLeaks and call themselves "Anonymous." They were using Twitter and Facebook to organize denial-of-service attacks against PayPal, Visa, MasterCard and Amazon. Twitter and Facebook just shut down their accounts.

Tim Wu, a professor of law at Columbia University, thinks Twitter is hypocritical because it permitted Iranian activists to plan political activities on its site but not WikiLeaks supporters. "There are people who should demand of Twitter: 'What are you doing? Since when are you in the business of deciding who and who isn't a good civil disobedience movement?' "

Marcia Hofmann, an attorney with the civil rights group Electronic Frontier Foundation, points out that it's not just corporations trying to shut people up.

"What we're seeing right now are a lot of situations in which people are simply trying to silence speech that they don't like on all sides," she said.

Professor Wu said so far the structure of the Internet continues to make it impossible for anyone to really censor anyone else.

WikiLeaks now has a server in Switzerland. The hackers who call themselves anonymous have found other places online to organize.

Wu and other observers worry that keeping the Internet open isn't going to be easy.

In countries like China, the government has found ways to limit access to online content that makes it too difficult for the average person to find it.

In the U.S., it's becoming more common for private companies to do the censoring.

And as private companies like Facebook and Twitter become the dominant public forums online, their ability to shut out speech may have an increasingly larger impact on public dialogue.