Accessibility links
National Review: Tax Fight On The Right? The tax deal made between President Obama and Congressional Republicans has sparked hated debate among conservatives, with Senator Jim DeMint urging GOP leaders not to pass it, but with other Republican senators saying they are leaning towards voting for it. Robert Costa of National Review argues that the infighting among conservatives has already been a win for President Obama. 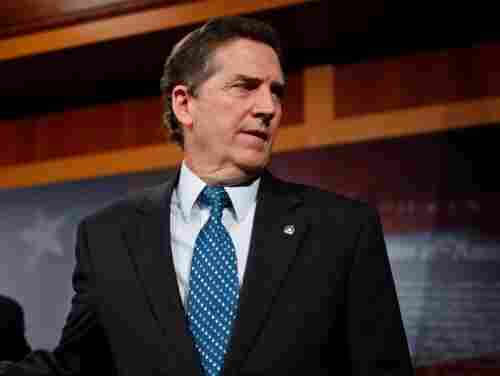 Robert Costa is a political reporter for National Review.

Bill Clinton, more than most, knows how to stir up Republicans. After shambling into the White House briefing room on Friday for an impromptu Q&A, he noted that "a lot of the hard-core conservatives think that Republicans gave too much" on the deal with President Obama to extend Bush-era tax rates.

"Read Charles Krauthammer's column in the Post today -- he's a brilliant man," a thin-grinned Clinton advised. "He pointed out that they got the divisive tax cuts, but most of them were targeted to middle-class working people." Numerous Republicans, Clinton mused, think "Democrats got more out of this than Republicans did."

Clinton's comments hint at growing discontent on the right over the deal, which was brokered by Senate GOP leader Mitch McConnell. While a broad swath of the GOP has backed the compromise, conservative lawmakers appear to be proceeding uneasily: Most are unhappy with aspects of the deal, but only a few are willing to completely shun it.

Extending the tax rates, of course, garners near-universal acclaim. But Republicans view other parts of the deal, such as the temporary payroll-tax deduction, the $56 billion toward jobless benefits, and myriad Obama-favored tax credits, as hold-your-nose compromises.

For an example of the grumbling, see Sen. John McCain of Arizona, who wrote in a Twitter message Friday that he has "serious concerns." Nevertheless, he will support the agreement because "Americans can't afford tax increases."

While McCain's grudging acceptance appears to reflect the caucus consensus, the whip count is far from certain. Indeed, with the Senate ready to vote Monday on whether to take up the tax agreement, Republicans, especially those who are Tea Party darlings, face a pressing decision: Will they fight?

As they mull their options, Krauthammer's Friday column is quickly becoming a rallying cry for critics. In arguing that Obama "won the great tax-cut showdown of 2010" and orchestrated the "swindle of the year" by securing the "biggest stimulus in American history," the columnist has provided ammunition for those who at first blush were simply uncomfortable with the premise of the deal and its caveats.

Senator-elect Pat Toomey (R-PA) echoed Krauthammer in a recent Fox News interview. "I think that the president didn't do too bad a job in negotiating this deal," he said. "He made one little concession and in return he got all kinds of spending that he wanted that's not offset -- extended unemployment without spending offsets."

With the Congressional Budget Office estimating that the deal will add over $857 billion to the deficit over the next decade, Toomey is not the only conservative politician making noise. Sen. Jim DeMint of South Carolina says the deal should be scuttled. He would prefer a deal with spending cuts and an agreement to make the tax-cuts permanent.

"Most of us who ran this election said we were not going to vote for anything that increased the deficit," DeMint said last week on Hugh Hewitt's radio program. "This does. It raises taxes, it raises the death tax. I don't think we needed to negotiate that aspect of this thing away. I don't think we need to extend unemployment any further without paying for it, and without making some modifications such as turning it into a loan at some point."

DeMint argues that by waiting until January to negotiate with Obama, Republicans can craft a better deal, with more cuts and less pork, thanks to the GOP's increased numbers in the next Congress. DeMint's GOP colleagues, though respectful of his argument, are unmoved by it.

Sen. Lamar Alexander of Tennessee, a member of GOP leadership, tells National Review Online that DeMint is making a "valid point," but he believes that there will be "broad support" for the deal in the conference this week. "We all have mixed feelings," he says.

Sen. Chuck Grassley (R-IA) has a similar take. He tells us that DeMint is advocating an "economically sound policy," but urges his colleagues to back the compromise, due to the uncertainty in the economy and the absence of available alternatives.

Even Oklahoman Jim Inhofe, who notes that he has been rated the most conservative member of the Senate, says that he is "trying to be realistic about this" and will support the deal. Newt Gingrich and Mike Huckabee, two potential 2012 presidential contenders, have offered similar statements.

Though support for DeMint's campaign against the deal may be lacking in the Republican cloakroom, grassroots conservative activists are encouraging GOP senators to align themselves with DeMint. Erick Erickson, the publisher of the popular RedState website, has called the tax deal a "TARP baby" and says that it "must now die." In a blog post, he asks his readers to call their senators and urge them to form a bloc against it.

Other conservative stars, such as Sarah Palin and Senator-elect Rand Paul of Kentucky, have followed suit. On Twitter, Palin told her thousands of followers that she expects "fiscal conservatives" to "fight for us and America's solvency" in coming days. Paul says he would "lean against voting for it."

"The most important thing government can do right now for the economy is to extend the Bush tax cuts," Paul said last week on CNN. "I would be for extending them permanently… If you're going to extend and add new tax cuts, you should couple them with cuts in spending. Instead, we're coupling them with increases in spending, and I think that's the wrong thing to do."

As Monday's vote nears, DeMint and company are looking for recruits to the cause. But with fiscal hawk Paul Ryan and tax-cut honcho Grover Norquist supportive of the deal's tenets, the climb is steep. Consequences for backing the deal are small, at least politically. As David Weigel of Slate reports, even the Club for Growth, the group famous for backing primary challengers to big-spending Republicans, is not interested in tangling with Republicans who back this deal.

In one sense, Obama already has won a minor victory: By splitting conservatives, he created a confusing Rorschach test for the GOP. Some see swindle, others a compromise, others a win. Quite the political dance, and positively Clintonian.