Accessibility links
Iraqi Christians Flee Wave Of Targeted Violence Before the 2003 U.S. invasion, Iraq had nearly 1 million Christians. Now, there are about half that number. A recent string of attacks against a Christian church and homes in Baghdad has prompted families to seek refuge in northern Iraq and try to emigrate. 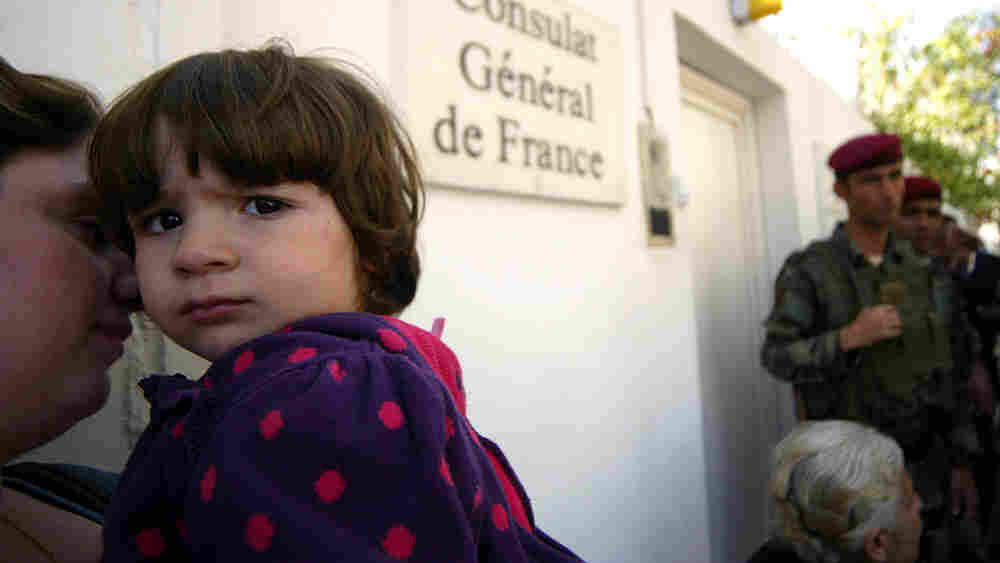 Iraqi Christians hoping to emigrate to France following a spate of violence against Christians across Iraq wait last month outside the French Consulate in the northern city of Irbil. Safin Hamed/AFP/Getty Images hide caption 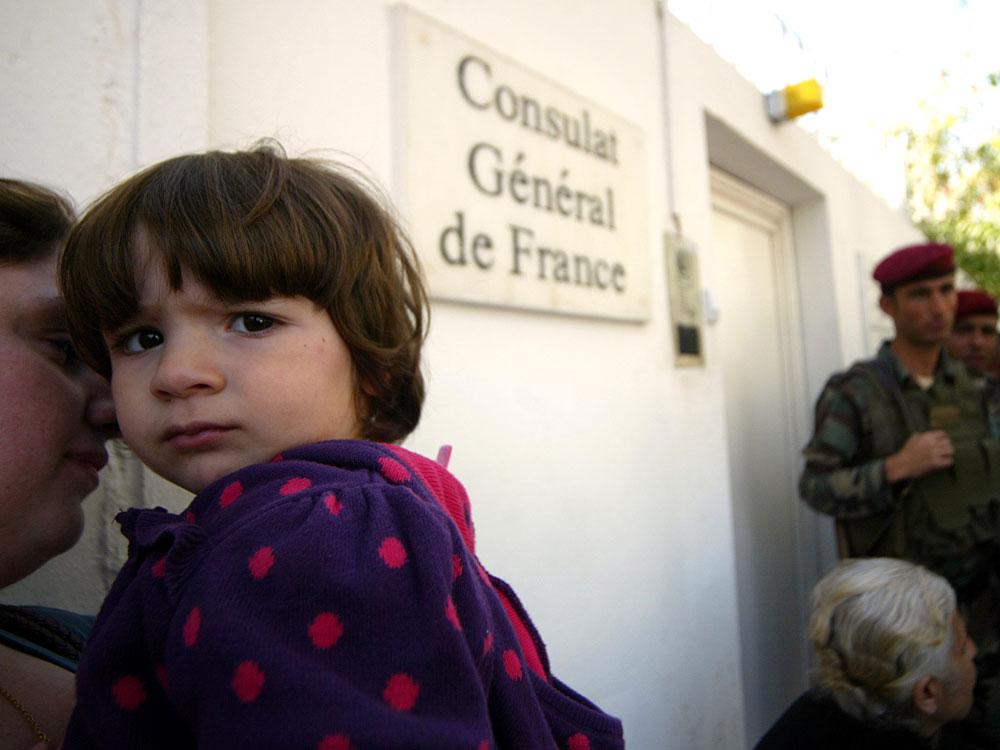 Iraqi Christians hoping to emigrate to France following a spate of violence against Christians across Iraq wait last month outside the French Consulate in the northern city of Irbil.

In Iraq, a wave of attacks targeting Christians is leading to an exodus from Baghdad and other cities. Before the 2003 U.S. invasion, there were nearly 1 million Christians in the country. That number was cut in half in the past several years.

Now, with the latest violence, families are seeking refuge in northern Iraq and trying to emigrate.

The latest spate of attacks on Christians started at Our Lady of Salvation Church, a Syrian Catholic church in a mixed, middle-class neighborhood in Baghdad.

During evening mass on Oct. 31, militants climbed the walls of the church, shot scores of worshipers, took hundreds more hostage, and then detonated suicide vests when Iraqi security forces mounted a rescue attempt. In all, 58 people died.

On a recent Sunday, bullet holes and signs of a battle remain all over the church. Toward the front doors is the telltale spray of a suicide bomber: bits and pieces of hair and skin stuck to the ceiling. 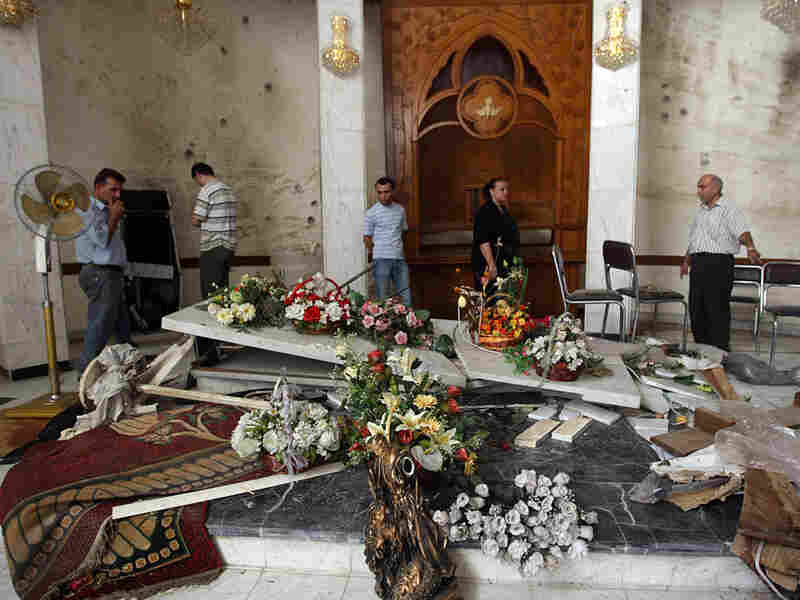 Iraqi Christians inspect damage last month at the altar of Our Lady of Salvation Church, a Syrian Catholic church in central Baghdad. U.S. and Iraqi forces stormed the church on Oct. 31 to free dozens of hostages in an attack by al-Qaida gunmen. Ahmad al-Rubaye/AFP/Getty Images hide caption 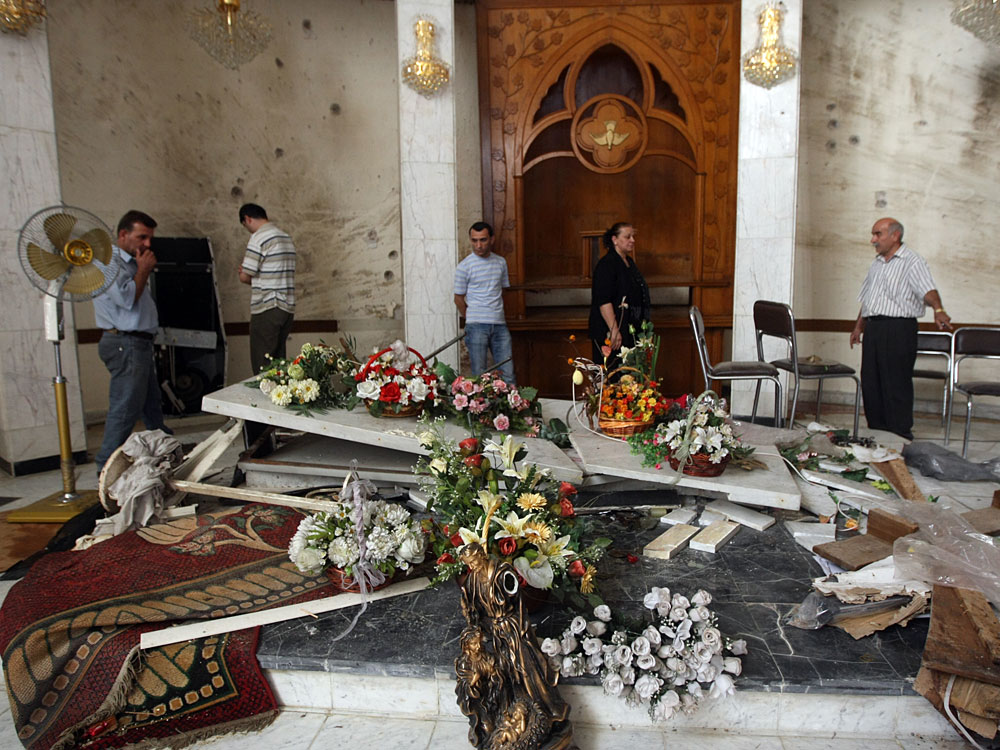 Iraqi Christians inspect damage last month at the altar of Our Lady of Salvation Church, a Syrian Catholic church in central Baghdad. U.S. and Iraqi forces stormed the church on Oct. 31 to free dozens of hostages in an attack by al-Qaida gunmen.

Iraqi police recently arrested a man who they say was the mastermind behind the attack. They say he is a top leader in the local branch of al-Qaida.

A mother of two, who only wants to give her name as Um Milad, or "mother of Milad," says she was just starting her day when she heard the boom.

"I woke up at 6 o'clock because I had to prepare my kid for school," she says. "And as we were in the room, suddenly all the glass were shattered. 'Are we being bombed from somewhere?' "

That somewhere turned out to be inside the family's home. Militants had sneaked in and planted a bomb. The explosion set the house on fire. The family escaped from the roof.

They were so scared, they actually sought refuge inside Our Lady of Salvation Church -- the church that was attacked on Oct. 31.

Christians around Baghdad have been getting threats by text messages and envelopes with bullets inside.

Officials in France and Germany have offered asylum to a limited number of Iraqi Christians. But diplomats in Iraq say that is a dangerous game. They say singling out Christians only makes them more of a target.

What's more, they say, in a country where hundreds of people still die every month, it's not as if Christians are the only victims.

Bashar Warda is a Chaldean Catholic archbishop. He says Christians have been part of this country since the 2nd century. But, unlike other Christian leaders, he can't in good conscience encourage Christians to stay.

"Practically, I cannot guarantee anything to any family. I would ask them if they have the patience to stay, if they could travel elsewhere, just for the meantime. That's all," he says.

Iraqi politicians repeatedly make speeches about how the government should help the Christians. But so far little has been done.

Christians are now seeking refuge in the region of Kurdistan in northern Iraq. Protected by Kurdish forces, it's seen as a safe haven.

Some Kurdish and Christian officials are even calling for Christians to form their own province and to arm their own militias.

But Salem Tamo Kako, a Christian member of the Kurdish parliament, says that would be a big mistake.

"We don't want to isolate ourselves from rest of the Iraqi community, or make Christians a very easy target for the terrorists," he says.

Kako says hundreds of Christians have moved to Kurdistan in the past few weeks, and thousands more are expected to follow.

Among those who have made the trip are two sisters, who in one short week went from middle class to the edge of desperation. Before the attacks, they owned a building in Baghdad where they rented apartments to other Christians.

Their husbands worked government jobs. But then a husband and a son were caught in the church siege.

Now, says one of the sisters, who only wanted to give her first name, Ban, she is ready to leave her country for good.

"I hate being an Iraqi, because what they do to us," she says.

Without any income, the family of nine is living off savings. Ban says they have enough for two or three months, no more.