Accessibility links
Stop Me Before I Facebook Again Being surrounded by a nonstop stream of information hasn't exactly helped us focus or concentrate on our work. But a software developer has come up with a barrier to help social media addicts kick the habit. The application is aptly called Anti-Social. 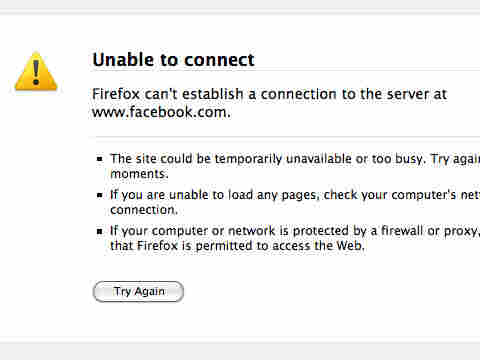 Users can use Anti-Social to block Facebook and other sites they find distracting. Anti-Social hide caption

Being surrounded by a nonstop stream of information hasn't exactly helped us focus or concentrate on our work. But a new software application can help social media addicts kick the habit.

Sure, the Web helps us do our jobs, but it can also distract us from them.

"We get a serotonin hit from this," says Kathy Gills, who teaches about the intersection of digital media technologies and social institutions at the University of Washington. "So those of us who are susceptible to that high keep getting these little Pavlovian dog responses. It's new, it's shiny...wheee! So, if that's part of your personality or genetic makeup, then these technologies can be something that you need to consciously think about managing."

Nielsen, the media research firm, calculated that one in every 4 1/2 minutes online is spent on blogs and social networking sites.

Anti-Social, a program for Macs, is just one of many applications that aim to keep digital distractions at bay.

Software called LeechBlock lets users choose specific sites to block. Turn on Isolator and you can cover up your desktop and all the icons on it. Dark Room and WriteRoom leave you with the equivalent of a blank typewriter page.

And if you want to get really hardcore about it, Anti-Social's developer, Fred Stutzman, also came up with Freedom, an application for Macs and PCs that completely blocks the Internet.

So, Fred Stutzman, a software developer, created an application to combat all of this time wasting. It's called Anti-Social.

The idea came to him after he fell into the Wikipedia trap: "You're doing some writing, you're doing some research, and you want to look something up and you find yourself at Wikipedia," Stutzman says. "And, as it always happens, one page on Wikipedia turns into to two to five to 10, and then you spend an hour learning about things but not necessarily getting work done. So by having a simple barrier to keeping yourself offline, it's very effective in terms of productivity."

"I believe I saw a tweet on it, which is kind of ironic because I was wasting time when I came across it," he says.

Prasad installed Anti-Social on his work computer recently. Before installing it, he says, he would take "like maybe 10-minute breaks every 20 to 30 minutes."

That means Prasad spent an average of 2 1/2 hours a day doing anything but work before he began using the program.

He says on a scale of 1 to 10, "I would probably give it a six because when I'm in front of my computer I won't [check] Facebook or Twitter. But I will give myself an F because I still lean back and check it on my phone."