Accessibility links
Obama Urges Senate OK Of Arms Treaty The Obama administration is increasingly optimistic that the Senate will ratify the New Strategic Arms Reduction Treaty, possibly this week. The big question is whether the administration has enough Republican support to get New START ratified before the new Senate is sworn in next month. 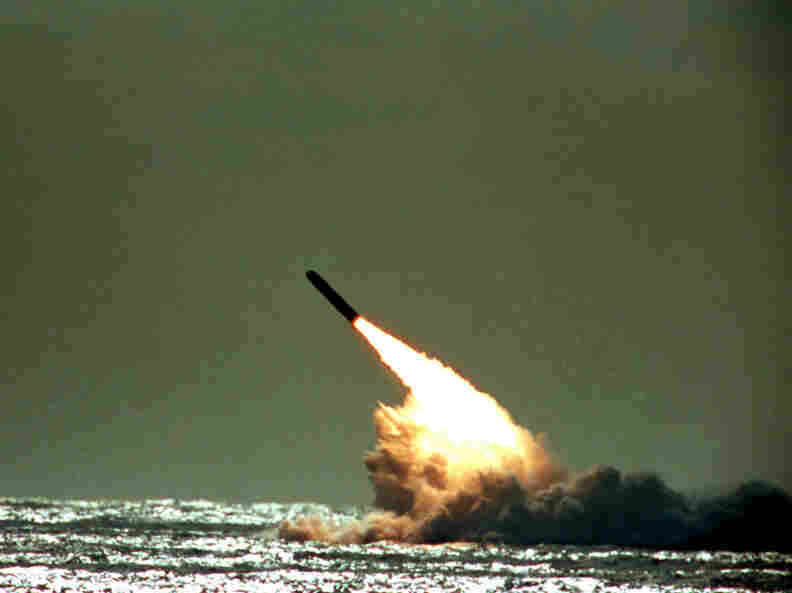 This 1989 file photo shows the U.S. Navy launching a Trident II D-5 missile from the submerged submarine USS Tennessee in the Atlantic Ocean off the coast of Florida. President Obama has made the ratification of the New START treaty his key foreign policy goal before the new Senate is sworn in next month. Phil Sandlin/AP hide caption

The Obama administration is increasingly optimistic that the Senate will ratify the New START treaty, possibly this week.

The New Strategic Arms Reduction Treaty was signed earlier this year, and if ratified by the Senate and the Russian parliament, would bring deployed U.S. and Russian long-range nuclear weapons to 1,550 on each side. That would slash current deployment of these weapons by one-third.

The big question is whether the administration has enough Republican senators to reach the required two-thirds majority the Constitution requires to ratify treaties.

President Obama has made the ratification of the new START treaty his key foreign policy goal before the new Senate is sworn in next month.

"That's a critical piece for our national security. We need to verify what's going on on the ground in Russia. It will help us enormously in terms of our cooperation on issues like Iran and North Korea. We have to get it done, we can't delay that. So I'm hopeful that we're going to get a vote on that and I think the support is there for it," he said.

The administration needs a lot of Republican support. It takes 67 votes to ratify a treaty. The treaty has 58 votes on the Democratic and independent side.

That leaves nine Republican votes to get to 67, a heretofore impossible task on major issues.

Nevertheless, Rose Gottemoller, assistant secretary of state for arms control and one of the chief negotiators of the treaty, says "We do see that there is a momentum moving in a good direction."

Right now, only three Republican senators -- Richard Lugar of Indiana, and Olympia Snowe and Susan Collins of Maine -- are on record supporting the treaty.

But based on various comments that other Republicans have made, there could be as many as eight more Republican votes in favor. That is more than enough, says Daryl Kimball of the Arms Control Association, to ratify New START.

Conservative Republicans oppose the treaty because they do not believe it is prudent to reduce the U.S. nuclear arsenal to the levels called for in the treaty. They also say the treaty would limit the development of an effective missile-defense system.

Advocates for the treaty, like Kimball, say this is a missile-defense-friendly treaty.

"[Opponents] have alleged that the New Strategic Arms Reduction Treaty will somehow limit U.S. missile defense options. The secretary of defense, the director of the Missile Defense Agency, have rejected that myth," he says.

Sen. John Kyl of Arizona, the Republican whip, has pressed the administration to budget more for the modernization of the current U.S. nuclear arsenal, and the White House has given him pretty much all that he has asked for.

Pressure To Get Vote Done

Nevertheless, Kyl has not embraced the treaty, and his recent comments suggest that he and a substantial faction of the Republicans do not want to see a vote before the new year.

Gottemoller, the assistant secretary of state, says delaying the ratification debate until next year will delay and likely stymie the treaty for the indefinite future, keeping the U.S. largely blind about Russia's nuclear deployments.

"It's already been a year since we had our inspectors on the ground in the Russian Federation. Once the START treaty went out of force December a year ago, they all had to leave. And we think that two years without inspectors on the ground in Russia, and without the opportunity to exchange data on our nuclear forces, will be a bad thing," she says.

Opponents of the treaty have said they will employ every procedural tool they can to prevent a vote this year on the new START treaty.

And whether the treaty does get to a vote is now also bound up with the fate of the new tax bill and whether Republicans get what they want there.

But the White House is talking about a vote on New START -- possibly as early as this week -- and Obama has postponed his Christmas vacation and plans to stay in Washington until there is action on the treaty.