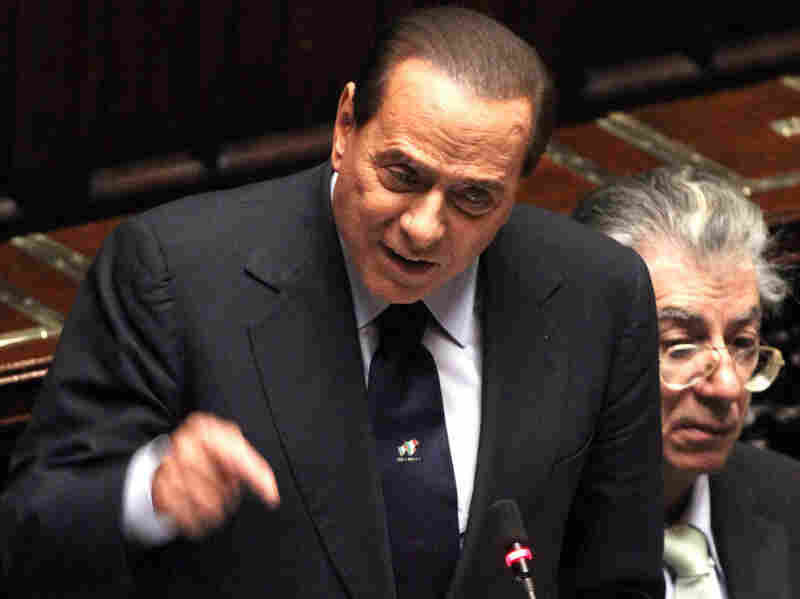 Bookmakers have had a hard time figuring the odds of Berlusconi's survival. A week ago, he was declared politically dead. But in the last few days, there have been numerous defections from the Berlusconi opposition in parliament.

At one press conference, a member of the opposition Italian Values Party -- notoriously anti-Berlusconi -- denounced two fellow party members who had just switched sides. "You are shameful," he yelled at them. "How can you betray us just days before the confidence vote?"

The reasons given for switching sides? One said the party ignored him. The other claimed he could no longer remain in a party that does not grasp the value of acupuncture.

The media dubbed this "the cattle market," and reports surfaced of some parliament members' mortgages suddenly being paid off and offers of lucrative consultancies.

Rome magistrates opened an investigation into possible corruption. But Berlusconi dismissed the vote-buying rumors as indecent.

Berlusconi was re-elected two years ago with a record majority. But a year of party infighting, corruption cases and sex scandals eroded his hold on power.

The showdown was triggered by rebel center-right deputies angered over Berlusconi's undelivered promises.

Their leader is Gianfranco Fini, speaker of the lower house and co-founder of the center-right People of Liberties Party. One reason Fini and Berlusconi parted ways was because Berlusconi's only concern, says Fini, is to shield himself from numerous corruption charges.

"Berlusconi does not want to govern. What he wants is to remain in office because as long as his parliamentary immunity holds, he doesn't have to face trial," Fini says.

Long known for his penchant for plastic surgery and hair transplants, Berlusconi has made headlines with vulgar jokes, machismo and a very high opinion of himself.

His critics decry what they call "Bimboland" -- the sexy starlets who he has promoted to become members of parliament and Cabinet ministers.

Most recently, Berlusconi was a topic of U.S. diplomatic cables made public by WikiLeaks. He was described as "feckless, vain and ineffective as a modern European leader" and fond of "wild parties."

Ties To Russia And A Lasting Legacy

But it's Berlusconi's close friendship with Russian leader Vladimir Putin that raises the most concern among U.S. diplomats.

"Nobody knows what Berlusconi is up to, how much of his dealings with Putin are private and for his own benefit, how much are for Italy's benefit, " says James Walston, professor of political science at Rome's American University.

On Monday, Berlusconi told parliamentarians he knows Putin well, a person he's convinced who is working hard for Russian democracy.

"Russia supplies us with 30 percent of our energy needs, and Italian firms do good business in Russia. I've always promoted Italian interests. And I can assure you, not one dollar of those business deals entered my pocket," he said.

Berlusconi's power is based primarily on his ownership of Italy's three major TV networks and indirect control of state-run TV. And many Italians have identified with his populist pose and us-against-them slogans.

Walston laments that even if Berlusconi does go down to defeat Tuesday, some of his legacy will remain.

"The complete amorality of Berlusconi's success is a lasting trait," Walston says, "the lack of respect for law and legal process, the fact that if you are powerful, you can get away with just about anything."