Accessibility links
Amid Unrest, Juarez Symphony Orchestra Plays On The Juarez Symphony has the misfortune of being located in Mexico's most violent city. But the orchestra is thriving amid rampant crime. The audience has remained loyal through the five years since the Juarez Symphony's founding. 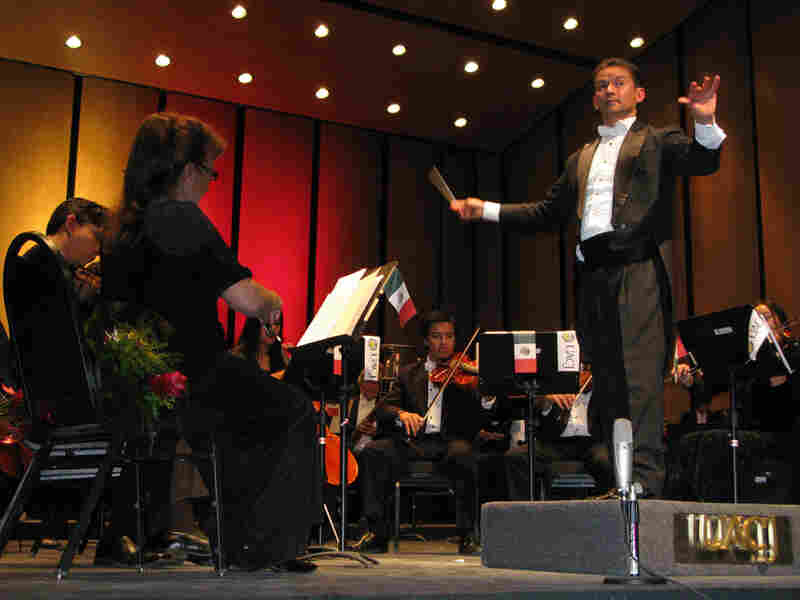 The Juarez Symphony produces more operas per year than any city in Mexico besides the capital. John Burnett/NPR hide caption 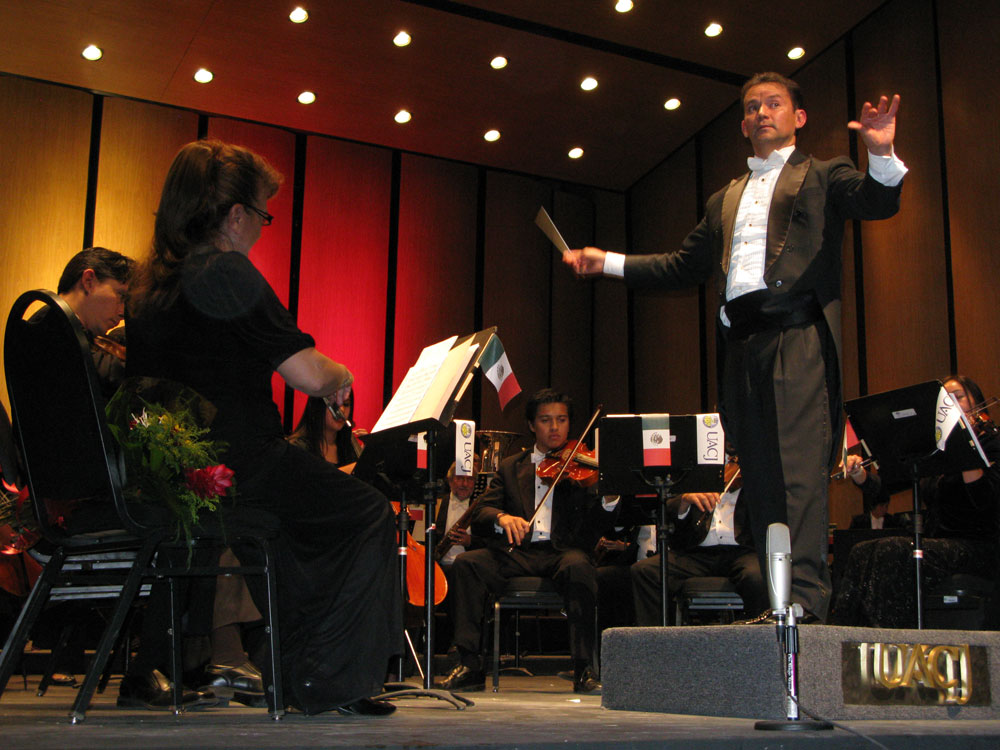 The Juarez Symphony produces more operas per year than any city in Mexico besides the capital.

It's been a rough couple of years in Juarez. Known as the murder capital of Mexico, Juarez is plagued by drug-related violence and organized crime. A quarter of the population is estimated to have fled, and thousands of businesses have closed. This year, the city even canceled its Independence Day celebration for the first time ever.

But the Juarez Symphony Orchestra plays on to grateful audiences that choose violins as a refuge from violence.

Its formal name is the Symphony Orchestra of the Autonomous University of the City of Juarez -- that's the sponsoring institution. The orchestra was founded only five years ago, just before the cartel war broke out and the city began its descent into lawlessness. But that hasn't slowed down the orchestra, which produces more operas than any other Mexican city outside of the capital. It has staged five operas this year -- including La Boheme and The Marriage of Figaro -- along with five orchestra concerts.

A Bold Response To Violence

The Juarez Symphony In Concert

The dynamo behind the Juarez Symphony is its 42-year-old conductor, Maestro Carlos Garcia Ruiz. He studied in Vienna, has guest-conducted orchestras around the world and also serves as director of the university's burgeoning music program. With the drug violence in the city so extreme that schoolchildren are taught how to dive for cover, Garcia has not canceled concerts -- he's expanded them.

"When the violence was really increasing, the economy was going down -- we started making more concerts, more operas. And that's why in the same time that the things are really going bad, we can have a good artistic health."

This is not to say the Juarez Symphony is immune to the unrest. Eighteen of its 22 well-heeled patrons in Juarez have fled to El Paso, Texas. Some still support the orchestra; others no longer do. Some musicians who play in the El Paso and Las Cruces Symphonies north of the Rio Grande are too afraid to cross the river anymore. Most of the string section has had to be replaced with student musicians. What's more, orchestra members have been robbed, carjacked and extorted.

"I've received calls trying to extort me, but I didn't pay," says Momchil Gozdov, a native of Bulgaria and first cellist.

Four Bulgarians play in the Juarez Symphony. They say they love Mexico and this orchestra.

"It's a light in the darkness," Gozdov adds.

Though many Juarez residents lock themselves in their homes after dark, a devoted audience still comes out at night for concerts. Rosa Maria Olivas, a chef, says she never misses a performance.

"The orchestra represents enrichment for the soul and the spirit," she says. "A moment of peace, a moment of enjoyment in this madness we're living."

Steve Wilson, a trombonist from El Paso, says it's the audiences in Juarez that keep him coming over to play in the world's most dangerous orchestra.

"There's been times when we've played two or three encores after a concert," he says. "And they'll keep clapping, basically make us play another piece."

This was the case last month, when the Juarez Symphony played a program of music by Mexican composers to commemorate the Mexican Revolution. After the orchestra finished the crowd favorite, Jesusita en Chihuahua, the audience clapped for so long that the orchestra played it again.

There are even bigger plans for 2011. With the understanding that music has the power to not just revitalize audiences, but also save lives, officials are moving to take the orchestra into the most marginalized neighborhoods of Juarez. Maestro Garcia has been selected by the Federal Counsel for Culture and Arts to create 10-youth music ensembles in tough barrios, places where young men become assassins for street gangs. Once a week, all 200 young musicians will gather in the concert hall to form the Juarez Youth Orchestra.

Garcia has a favorite saying that he hopes his youngsters will live by.

Translation: "He who has an instrument in his hands in the afternoon won't won't pick up a weapon at night."