Accessibility links
Anthony Mackie, A Star Rising Step By Striking Step A well-received new drama -- and a personal project involving some sidewalk scavenging -- are the latest projects for the actor, whose performance in last year's The Hurt Locker opened all sorts of Hollywood doors. 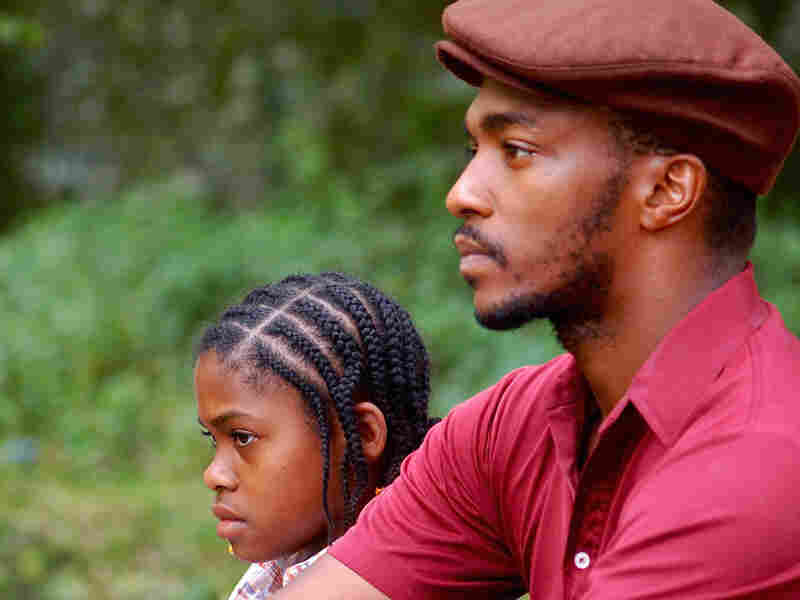 Anthony Mackie (with Jamara Griffin, left) plays former a Black Panther coming to terms with his past in the new drama Night Catches Us. It's the latest in a string of indelible stage and screen performances from the rising New Orleans-born star. Magnolia Pictures hide caption 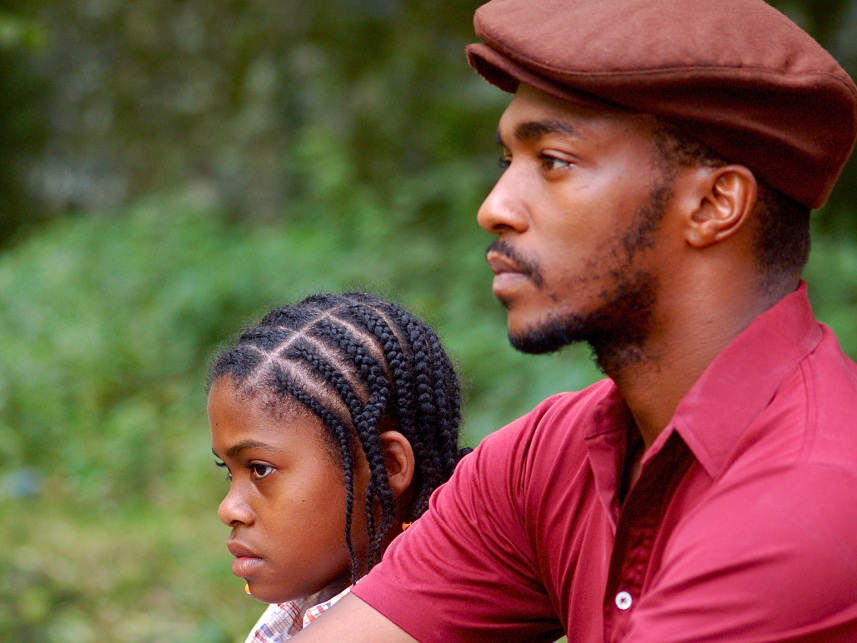 Anthony Mackie (with Jamara Griffin, left) plays former a Black Panther coming to terms with his past in the new drama Night Catches Us. It's the latest in a string of indelible stage and screen performances from the rising New Orleans-born star.

If you know Anthony Mackie, you probably know him as "the black guy from The Hurt Locker" -- the tightly wound sergeant butting heads with a rule-breaking bomb tech. Since then, he's landed roles in a slew of films; some are still in post-production, but one -- Night Catches Us -- is playing in art-house theaters now.

The film is set in mid-'70s Philadelphia, and Mackie's character -- a former Black Panther -- is suspected by everyone in his splintered Philadelphia neighborhood of being a snitch for the FBI. The actor was drawn to this tiny, low-budget movie because it explores a moment in black history that's been neglected by Hollywood. And he loved its richly regretful main character -- Marcus, a onetime revolutionary disillusioned by the Panthers' collapse.

"You know, you build this beautiful house of smoke and mirrors and cards and it just crumbles," Mackie says. "And [Marcus is] kind of in the place of rebuilding that crumpled card house."

First-time director Tanya Hamilton, who says Mackie brought understated torment -- and fury -- to the role, and that's it's part of what helped the film pick up positive buzz when it opened at Sundance last year. 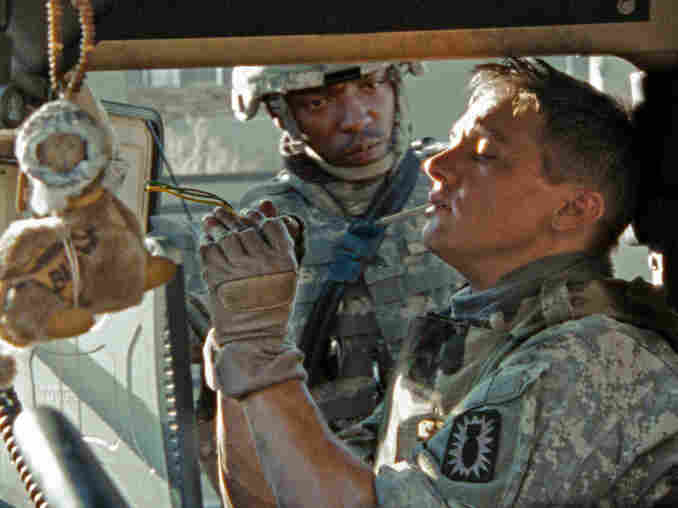 "But the fury's very tempered," Hamilton says. "It's something Mackie does really well -- you know, that there's warning under the surface. The edge is so palpable and real. Yet he doesn't have to raise his voice. It's all in his eyes."

It meant everything for the novice filmmaker to work with a seasoned veteran. Mackie is only 31 years old, but he's been directed by the likes of Clint Eastwood, Jonathan Demme and of course Hurt Locker Oscar winner Kathryn Bigelow.

"He kind of held my hand a little bit," Hamilton says.

Especially when it came to one of filmmaking's more delicate tasks -- putting together a love scene. It helped that Mackie and the film's other lead actor, Kerry Washington, had worked together before, in Spike Lee's She Hate Me.

"Both of them said, 'Okay, just step back, here's how you do it," Hamilton remembers. "And they were like, 'You go here, you go here. ... On the chair, on the floor.' That was how generous he was as an actor, to give me these little pieces I didn't have."

Rooftop Lessons About Work And Worth

Mackie is just one of the latest in a line of artists dedicated to bringing intelligent black stories to the screen. He's been mentored since high school by the actor Wendell Pearce, who played Bunk on The Wire. Both are from New Orleans, and when Mackie was 14, Pearce visited his school. He cut an impressive figure, Mackie recalls -- "this broad, statuesque black man in a white linen suit."

He pauses, then breaks out an only-from-the-Deep-South analogy.

"Ever since then I've been like running behind him like I'm a rabbit and he had a carrot in his butt." 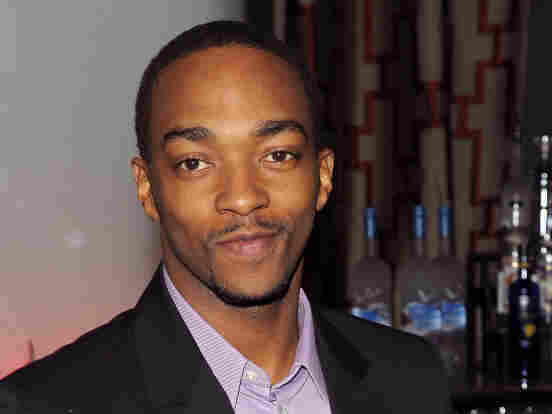 Mackie (pictured at the New York Film Critic's Circle Awards in January 2010) studied drama at the Juilliard School and made his first big splash opposite the rapper Eminem in 8 Mile. Stephen Lovekin/Getty Images hide caption 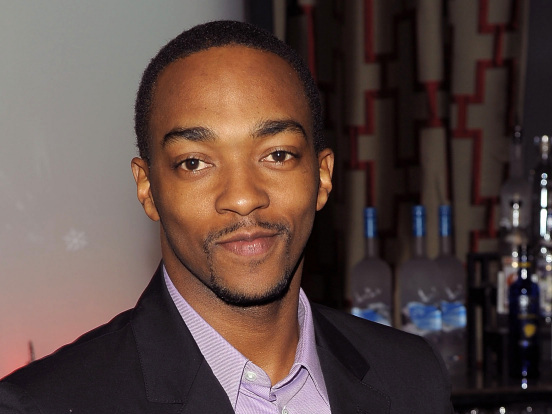 Mackie (pictured at the New York Film Critic's Circle Awards in January 2010) studied drama at the Juilliard School and made his first big splash opposite the rapper Eminem in 8 Mile.

Mackie gives Pearce credit for helping shape his career. Another force was his father, a man Mackie describes as being from "backwoods Louisiana, a construction worker who never made it out of eighth grade. When Mackie was growing up, his summers were spent working on roofs with his dad, mopping tar.

"My dad would pay me by how many squares of shingles I could put down -- and this was before nail guns, [or] when we couldn't afford nail guns," Mackie remembers. "So literally you're walking across a roof all day -- 100-degree heat -- and my dad would say, 'You like this work?' I would say, 'I hate it.' and he would say, 'Well, that's why you have to go to college.' And I'm like, 'You don't have to worry about me.'"

One of Mackie's brothers went to law school. Another became a professor of engineering. Mackie studied drama at the Juilliard School -- Wendell Pearce's alma mater. He got a work-study scholarship with the school's physical plant. At first he struggled; he was put on academic probation after his first year. But he pulled himself together, and soon he was outpacing his classmates. He starred in an off-off Broadway play before graduating. And when he did graduate, director Curtis Hansen cast Mackie as Eminem's enemy in the 2002 movie 8 Mile.

'Night Catches Us': Shadows Linger, Even After Dawn

"I'm supposed to play a rapper, and there were all these real rappers on set," he recalls. "So I was like, 'I have to beef my machismo up; I can't let these dudes pump me.' Because people were saying this crazy stuff -- 'You don't deserve to be in this movie, you ain't real.' And I was like, 'I'm real! Grrrrrrrrr!'"

In the next year, Mackie's slate of films includes one with Matt Damon called The Adjustment Bureau, based on a Philip K. Dick short story. More than anything, he'd love to play Jesse Owens, the Olympic athlete who defied Hitler's notions of Aryan superiority. He's got a script. He's looking for a producer.

But these days, the thing that's keeping Mackie's cell phone ringing isn't an acting project -- it's his own bar. He's opening one in the Bed-Stuy neighborhood of New York. Guess who's building the furniture.

"That's my therapy," he laughs. "I bought a saw, a router, so now I just go around the neighborhood, find wood, make it into stuff."

The bar should open next year. Mackie lives in Bed-Stuy and New Orleans, where his girlfriend stays with their son. He's handy enough in both locales, but he says when he's back in New Orleans, there's one chore he'll never do.