Accessibility links
Will Sudan Vote Make A New Nation, Or War? Next month, the people of Southern Sudan will choose whether to break up Africa's biggest state and create the world's newest nation. Much is at stake, including most of Sudan's oil reserves and -- potentially -- peace in one of the continent's more volatile countries. 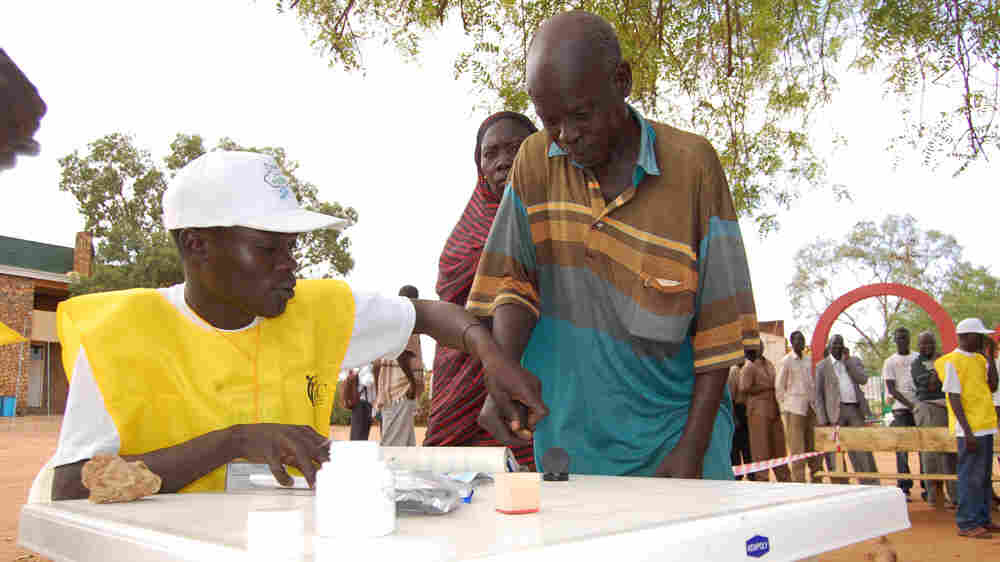 People stand in line at Juba University for hours to register to vote next month on independence for Southern Sudan. Here, a poll worker helps a prospective voter put a thumb print on his registration card. Frank Langfitt/NPR hide caption 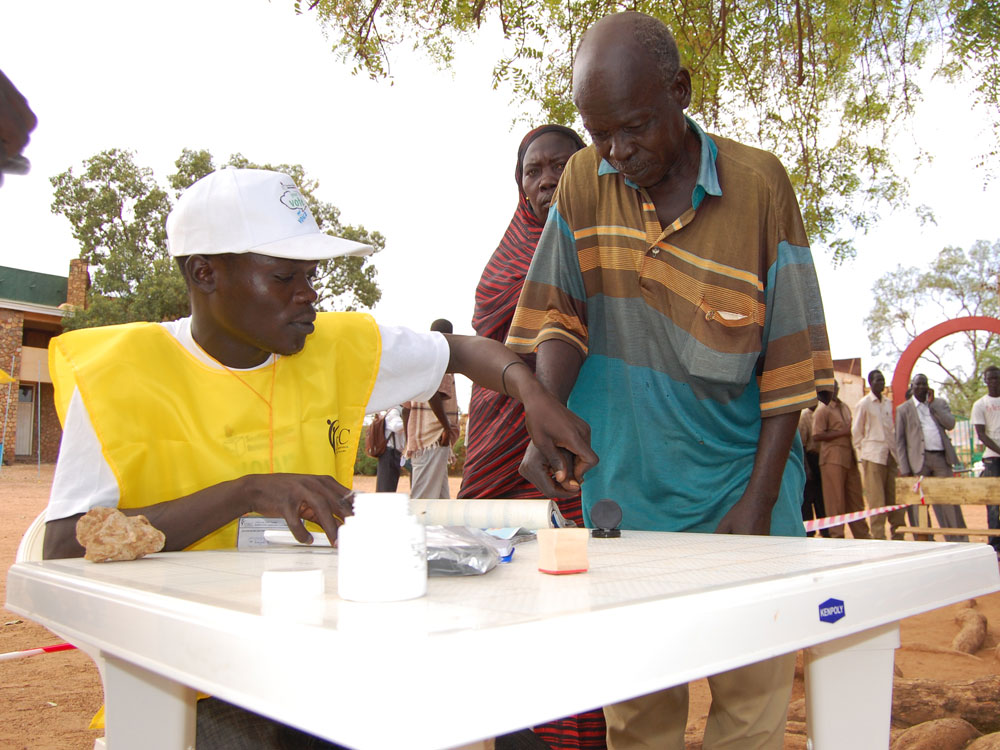 People stand in line at Juba University for hours to register to vote next month on independence for Southern Sudan. Here, a poll worker helps a prospective voter put a thumb print on his registration card.

The people of Southern Sudan will choose next month whether to break up Africa's biggest state into north and south and create the world's newest nation. Much is at stake, including most of Sudan's oil reserves and -- potentially -- peace in one of the continent's more volatile countries.

The biggest question looming as the Jan. 9 referendum approaches: Will the north and its Arab-led government let the mostly ethnic-African south go without more bloodshed?

These days, an air of melancholy hangs over Khartoum, Sudan's dusty desert capital.

Khidir thinks southerners will vote to split from the north when they go to the polls, and he doesn't blame them.

After all, the north fought the south for two decades in a civil war that cost 2 million lives. Still, losing the south will be tough to take, Khidir says.

"I'm losing part of my family," he says, sitting in his living room on a recent morning with the curtains closed to keep out the heat. "In fact, one part of my body is going to be cut off." 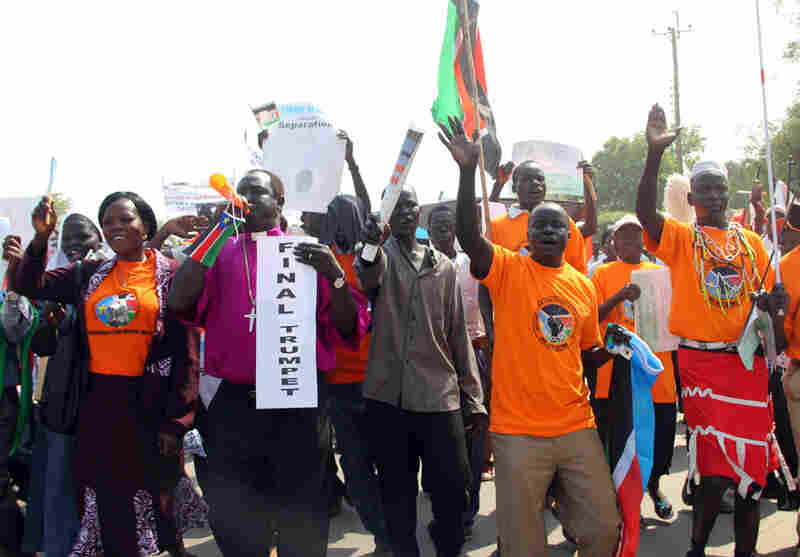 Southerners: 'It Is Our Freedom'

More than 700 miles away in Sudan's southern capital of Juba, the mood is completely different. Last month, people began registering to vote in January's referendum. At Juba University, they stood for hours beneath a shade tree to put their thumb print on a registration card.

"This is what we were fighting for all these years," says Deng Main Maker, a junior studying education. "It is the right of the people of Southern Sudan and it is our freedom. We shall not be under somebody anymore."

Several dozen students are hanging out in the school's dusty courtyard, where goats mill about munching trash. All say they will vote for independence.

One of the students, Archangelo Malone, studies rural development at Juba University. At 34 years old, he just a junior. That's because Malone spent much of his youth on the run and in Ethiopian refugee camps.

When do states go to war? When their vital interests are jeopardized.

The Lost Boys -- many of whom resettled in the U.S. -- were the most famous victims of Sudan's civil war, which was fought over religion, resources and ideology.

Northern troops burned the Lost Boys' villages or southern rebels conscripted them. Orphaned or separated from their families, thousands made an epic journey across the region on foot, enduring bandits, floods, disease and bombing raids.

The 2005 peace agreement between the government in Khartoum and the Southern Sudan People's Liberation Movement, ended the war, established semi-autonomy in the south and called for the referendum on independence.

Given his experience, Malone doesn't trust the northern government.

He thinks the referendum commission -- which is chaired by a northerner -- will try to cheat the south out of independence.

"When they announce that the result of the referendum is for unity ... it will erupt everywhere," predicts Malone, who thinks the north wants to provoke a war.

What Each Side Stands To Lose

If some southerners fear a return to violence, some in the north do as well.

"When do states go to war?" says Mohamed Hamad, a political science professor at the University of Khartoum. "When their vital interests are jeopardized."

Hamad says the north stands to lose a lot in secession.

Southern Sudan is a territory nearly the size of Texas with the vast majority of the country's oil reserves, which have fueled the north's economic growth.

The north could even lose some of the water from the Nile River, because Juba is upstream from Khartoum.

Full-scale conflict in Sudan between north and south is over. That boat has long sailed.

"The unity of the country can be called a vital interest," Hamad says. "Without this petrol, this (northern) government could have never gotten off the ground."

Rabie Abdulati Obeid, a leader in Sudan's ruling National Congress Party, says the north is not preparing for an oil war with the south. He says that's because when it comes to oil, both sides need each other. The south has most of the oil, but is desperately poor and has almost no infrastructure.

"That oil produced in the south, we are ready to take it in our pipeline to the sea," Obeid says. "In case of secession, the south will be a closed country. They have no shores."

Of course, the north will charge fees and refine the crude itself. Obeid says the south's only other option would take years: building a pipeline through Uganda or Kenya.

Ahmed Badawi, who runs a think tank and advises politicians from both the north and south, says the fear of violence is overblown.

"Full-scale conflict in Sudan between north and south is over," he says. "That boat has long sailed."

Badawi says much of the rhetoric is just that -- a way to ratchet up pressure as the two sides negotiate outstanding disputes, everything from how to split oil revenues and international debt to the demarcation of a new border.

"In many respects, the war of words that had occurred until relatively recently is a sign of progress," Badawi says. "Better they have a media war than an actual war on the ground."