Accessibility links
Veteran U.S. Diplomat Richard Holbrooke Dies The president's special envoy for Afghanistan and Pakistan died Monday at 69, days after suffering a tear in his aorta. He held many diplomatic and foreign policy positions over the years and, in 1995, negotiated an end to the Bosnian War. 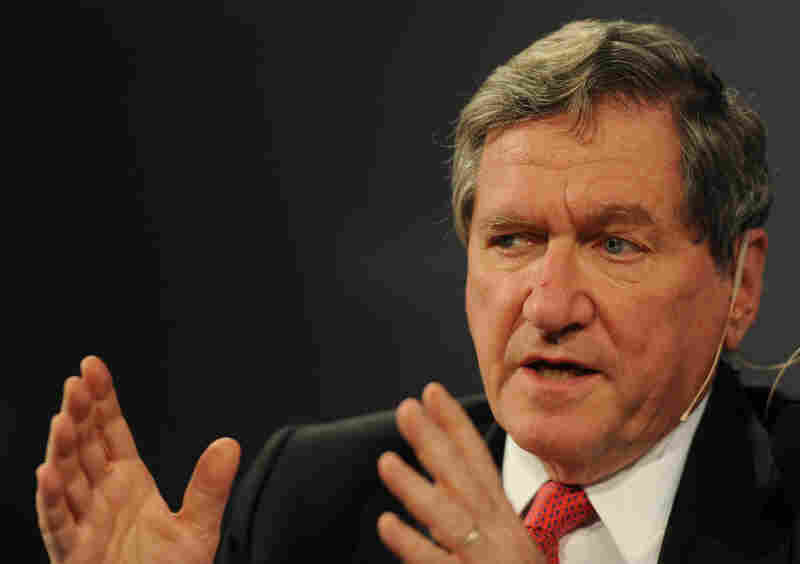 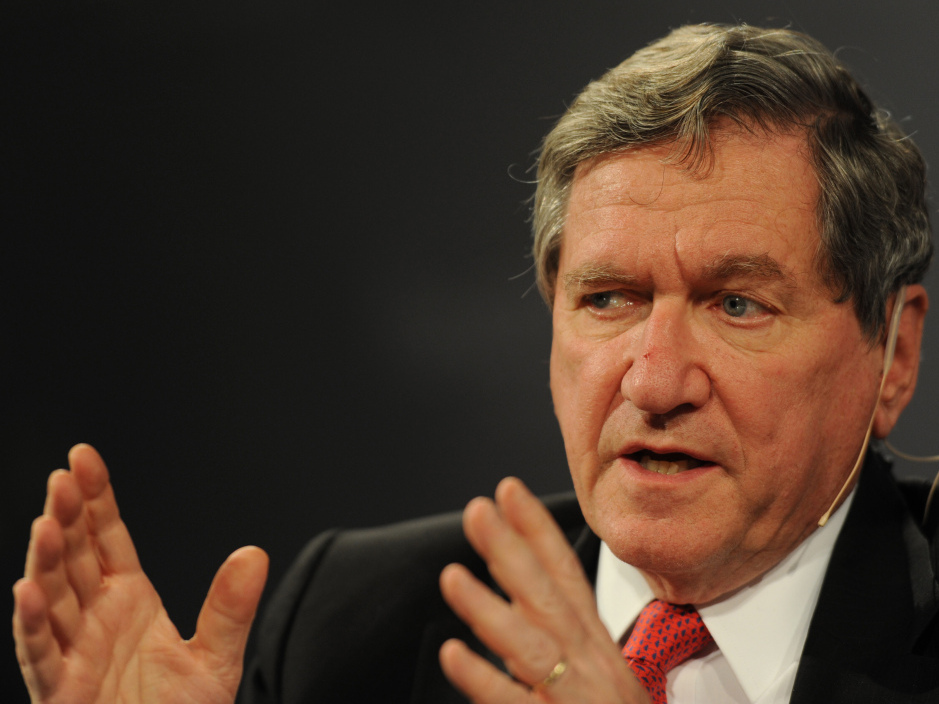 Richard Holbrooke, U.S. special representative to Afghanistan and Pakistan, takes part in a discussion on international security in Passau, Germany, on Nov. 12.

Richard Holbrooke, an American diplomat who covered many of the globe's trouble spots in a career spanning nearly a half-century, died Monday. The U.S. special representative to Afghanistan and Pakistan suffered a tear in his aorta and collapsed on Friday while at the State Department. He had been hospitalized since. He was 69.

Holbrooke was a man who could fill a room -- not just by his imposing physical presence, but also through his personality, his energy and drive. Holbrooke loved the limelight and moving among the world's powerful elite, says Daniel Serwer, who served under Holbrooke during the war in the Balkans.

Holbrooke will be remembered in large part for negotiating an end to that war with the 1995 Dayton Agreement.

On Negotiating Peace In Afghanistan

Holbrooke On Negotiating Peace In Afghanistan

On The Strategy In Afghanistan

No Easy Answers In Afghanistan, Pakistan

On The Haqqani Network

On Collaborating With Pakistan

"He was a guy who liked to control all the levers of power, and it was an extraordinary virtuoso performance when he did that. Now, a lot of us will remember him in his harsher moments, of course, but the fact is that he could be extraordinarily charming as well," he said.

"He is simply one of the giants of American foreign policy," President Obama said earlier Monday, while attending a holiday reception at the State Department.

"Few people have ever left a larger mark on the State Department or our country," she said.

It was a rare blend of tough and gentle that helped Holbrooke evolve into a world-class negotiator. He first entered government service in 1963. At 22, he was sent to Vietnam as a foreign service officer. Serwer, now with the Johns Hopkins School of Advanced International Studies, says the Vietnam War loomed very large with Holbrooke. Serwer says it was a constant theme when he worked with Holbrooke in the Balkans.

"This was formative for him -- that the Americans had failed in Vietnam, and they had failed partly because they had not used their power appropriately," he said.

Holbrooke went on to be a member of the U.S. delegation at the Vietnam peace talks in Paris. He also served as ambassador to Germany, assistant secretary of state for Europe and East Asian and Pacific Affairs, and as U.S. ambassador to the U.N.

He was tenaciously committed to results, he would focus on those results and he would do nearly anything to achieve those results.

Holbrooke described how his father, a refugee from Nazi Germany, took him to see the U.N. complex in New York when he was just a young boy. His father told him the U.N. would be instrumental in preventing future wars. Holbrooke says his father did not live to see how his dream for the U.N. "dissolved in the face of the harsh realities of the Cold War and the inadequacies of the U.N. system itself." Holbrooke said despite its many problems and failures, he still believed in "the importance, indeed the necessity, of the United Nations."

While Holbrooke held many diplomatic and foreign policy positions over the years, arguably the height of his diplomatic career was the 1995 Dayton peace accord. Holbrooke brought all sides in the Bosnia conflict to the negotiating table and orchestrated the effort to draw up a peace agreement to end the bloodshed in the Balkans.

Steve Clemons, a senior fellow with the American Strategy Program at the New America Foundation, says it took Holbrooke's strong nature to work on the Bosnia negotiations. Clemons, who knew Holbrooke for about 15 years, says he was very ambitious and would bulldoze his way to results.

"I think Richard was a highly talented, skillful diplomat who was used to dealing with tough neighborhoods and tough people, monstrous personalities," he said. "He was tenaciously committed to results, he would focus on those results, and he would do nearly anything to achieve those results."

Clemons says history will be kind to Holbrooke over the Dayton Agreement, but maybe not on his last position as U.S. special representative to Afghanistan and Pakistan. Clemons says he thinks the history books will be mixed. He says Holbrooke made some strides trying to build up civil society in Afghanistan, but hit many brick walls and clashed with many of the key players.

"Of all the things that he might have been given by the Obama administration, they gave him just about the very worst portfolio. I think that had he continued to be with us, I think he would have found a way to force this, at least force his portfolio into a win," he said.

Clemons says Holbrooke was trying to be innovative in his role as special representative, and he opened up the possibility of negotiating with the Taliban as a way of ending the conflict in Afghanistan. But he understood the dynamics were much more difficult there.

"Each negotiation has its own dynamic, and this one is unique. It's not going to end at a place like Dayton, Ohio, where you get all the combatants behind a high barbed-wire fence and don't let them out until you have an agreement."

Holbrooke is survived by his wife, Kati Marton, and two sons.

Holbrooke: 'Tougher The Characters, The More He Enjoyed The Challenge' Dec. 14, 2010