Accessibility links
End Of Days For Bookstores? Not If They Can Help It There was a time, not so long ago, when chain bookstores had a pretty bad rep. But in the era of online buying and the e-book, the chains are in trouble -- and new technologies are providing independent bookstores with a lifeline. 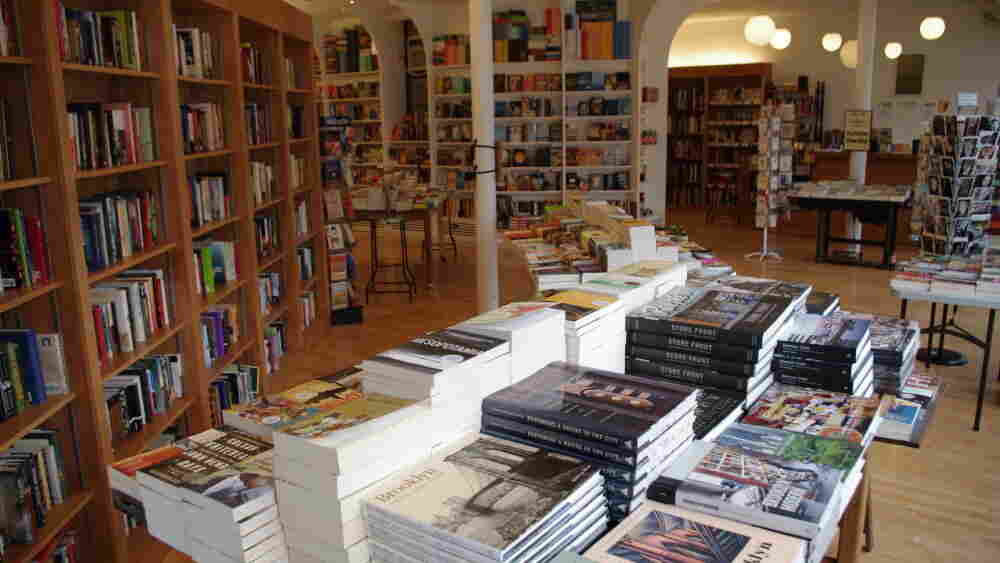 Remember When They All Used To Look Like This?: Independent bookstore Greenlight Books opened in Brooklyn a year ago -- and is currently thriving. Lance Edmonds hide caption

There was a time, not so long ago, when chain bookstores had a pretty bad reputation. Barnes & Noble and Borders were seen as predators eager to destroy local booksellers -- and neighborhood bookstores were weathering threats from all sides. Megastores like Costco started selling bestsellers and encroaching on local shops. Then came a little company called Amazon, and the rise of online book buying. The indies were struggling to make ends meet, and many had to close their doors.

But these days, independent bookstore owners Rebecca Fitting and Jessica Stockton Bagnulo of Greenlight Books in Brooklyn argue that the struggling local bookstore is a thing of the past.

"That was the only story people -- especially in media -- could wrap their heads around," Bagnulo says. " 'Oh isn't it sad that all the independent bookstores are dying and they are being destroyed by chains!'"

Now, the tables have turned. In the era of online buying and the e-book, both currently dominated by Amazon, the big chains are in trouble -- and new technologies may provide independent bookstores with a lifeline.

[The chains] don't have the same emotional connection to their neighborhood that a local store does.

Defying all the naysayers about the future of bookstores -- especially in a tough economy -- Fitting and Bagnulo opened Greenlight in the Ft. Green section of Brooklyn a year ago. They knew the neighborhood they moved into desperately wanted a bookstore. And that local support has proven to be invaluable.

The store has lots of regular events, like Saturday morning story time for children and high-profile author readings from the likes of Jennifer Egan and Jhumpa Lahiri. But on any given day, it attracts locals like Ft. Green resident Roxanne Powell.

"It's good to have it here and to see it flourishing," Powell says, as she browses the store's collection. "I even feel like I have to stop going to Barnes & Noble and support my local bookstore."

Fitting and Bagnulo know that a delicate combination of factors has to come together to make their particular neighborhood bookstore succeed. But they believe this could be a good time for stores like theirs everywhere. According to Fitting, it's the chain stores, not independent booksellers, which belong to another era.

"I kind of feel like we're coming to end of the age of dinosaurs and there's all these warmblooded animals running around instead," she says.

If the dinosaurs are the two big chain stores Borders and Barnes & Noble, the latest news hasn't been good. Last week, Borders reported a third-quarter loss of more than $74 million, and confirmed that it is closing 16 stores. Despite its precarious state, one of Borders' biggest stockholders has offered to finance the purchase of Barnes & Noble, which put itself up for sale last summer. That offer helped boost Barnes & Noble stock, but many observers think a merger of the two chains is unlikely. Barnes & Noble says it's considering a number of options, including not selling itself at all.

For her part, Bagnulo sees the chains' woes -- and the recent news that Google is entering the e-book market -- as something of an opportunity.

"The potential is for there to be two trends," she explains. "Digital content -- which is ubiquitous and everywhere -- and the local, boutique, curated side. And the chain stores unfortunately don't have the advantage in either of those areas. I mean, they can't carry every book in the world in their store, and they don't have the same emotional connection to their neighborhood that a local store does."

"It's really hard for me to be sympathetic to the chains," says Elaine Petrocelli, the co-owner of Book Passage in San Francisco. She's been in the business since the 1970s, and has not forgotten when a chain store moved into her neighborhood and almost put her out of business.

The most recent threat to bookstores like Petrocelli's is the emergence of the e-book and Amazon's dominance of the market with its e-reader, the Kindle. So Petrocelli was heartened by the news that Google will make it possible for independent bookstores to sell e-books from their websites.

Petrocelli views e-books as a new marketing challenge, especially now that she can sell them herself.

"I think that it's possible that the Kindle could turn into the Betamax," she says. "That's my nasty wish, because they won't share with other people. You need to buy your book through Amazon in order to use your Kindle. [On] all of the other readers you can work with the Google editions [of the books], and so I think that's going to be the next thing."

Len Riggio, the CEO of Barnes & Noble -- the very chain that once threatened Petrocelli's business -- thinks that the two of them have something in common.

"I think the biggest threat to Barnes & Noble is the same threat that exists to independent book sellers and to anyone engaged in the sale of printed books," he argues. "It's all about the Internet itself."

Book sales have declined for everyone, says Riggio, because whole categories like reference books and travel books are no longer needed, now that such information is available for free on the Internet. That's why Riggio, like Petrocelli, is banking his stores' future not on books alone, but on the sale of electronic devices. Prominent among them is Barnes & Noble's own e-reader, the Nook, and its latest iteration, the Nook Color. But as important as the Nook is to Barnes & Noble, Riggio says the strategy for the future is to be device agnostic. The potential market is huge.

The sale of those devices, he adds, would then support the sale of traditional books.

This past year, Riggio fought off a hostile attempt to take over the Barnes & Noble board, and along with it, his chairmanship. He won't comment on the potential sale of Barnes & Noble, though a decision is expected early next year. Still, he says this is an exciting time to be in the business, and he is anything but downbeat about his company's future.

"It's pretty heady times," he says, "and we don't know how it's going to turn out. But if you want to count up the people who will have a say in how it will turn out, put us in as one of them."

And what about the independents? Will they just become precious reminders of a time when  most people read books made of paper? Not a chance, says Elaine Petrocelli. All bookstore owners know that the digital future is now. It's up to them to work it in a way that keeps their doors open and their shelves filled with actual books.