Accessibility links
The Charging Conundrum: How To Feed Electric Cars? Plug-in electric cars are in showrooms and on the highways, but there's currently no convenient way to recharge them. Electric grid engineers are now trying to build an infrastructure to handle the cars' erratic demand for electricity. 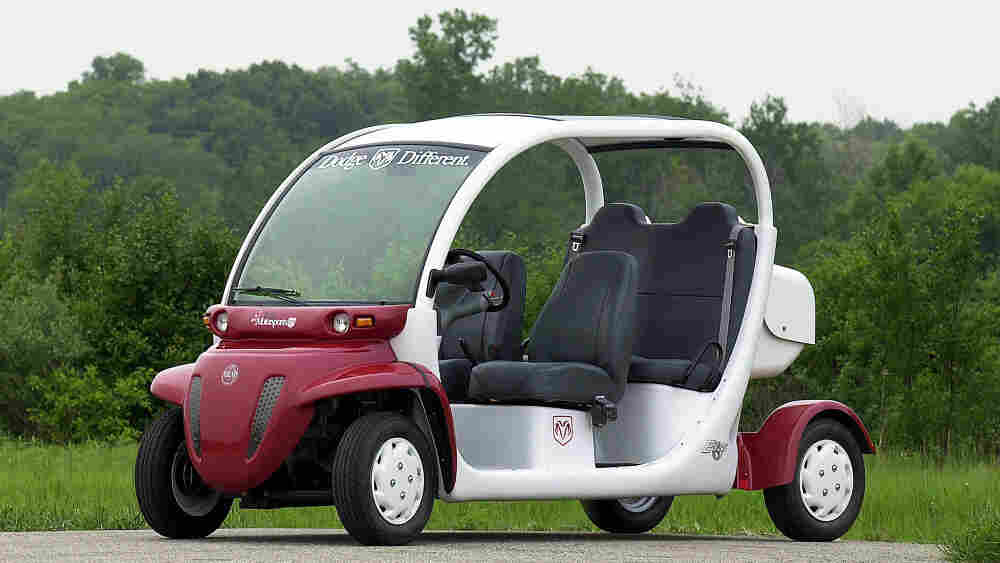 The Chrysler GEM electric vehicle is one of many plug-in vehicles that draws power from the electric grid. Engineers are trying to find ways to supply the power that electric cars will need in the coming years. CaimlerChrysler/Getty Images hide caption

The electric car is no longer just a project for smarty-pants MIT students. Here in the U.S., plug-in electric cars are now in showrooms and on the highways. What's missing, though, is a convenient way to refuel those cars with electricity.

That's what Russell Rankin has discovered. Rankin is an enthusiastic entrepreneur who has 13 electric vehicles charging up at the back of the Loews Hotel in Annapolis, Md. They're not quite cars, but they're more than golf carts -- three rows of two seats, open on the sides, about 12 feet long.

"Everybody kind of calls it a golf cart on steroids," says Rankin. "Or maybe something you'd see at Disney or something like that. It has a big bubble roof on it -- it's very futuristic looking."

The vehicles are made by Global Electric Motorcars, owned by Chrysler. Rankin's company, eCruisers, uses them to squire people around the city for free. Advertising on the cars pays the freight. 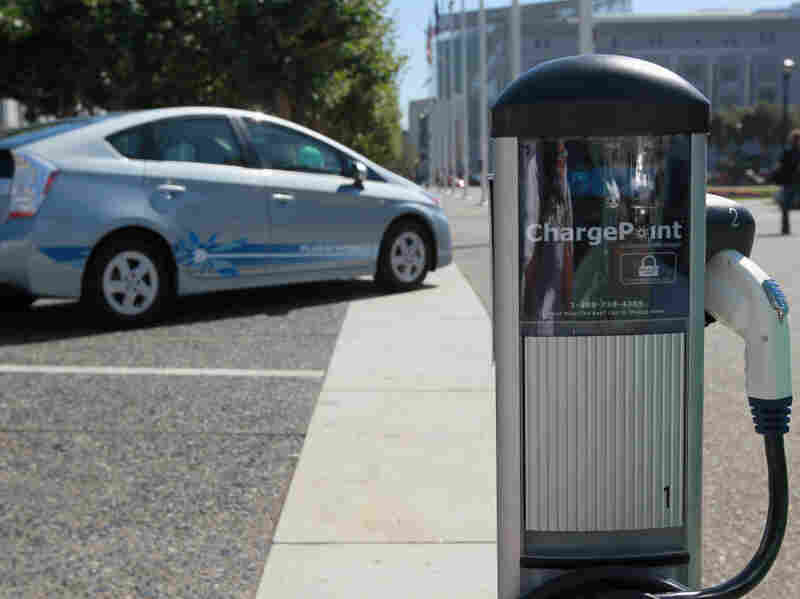 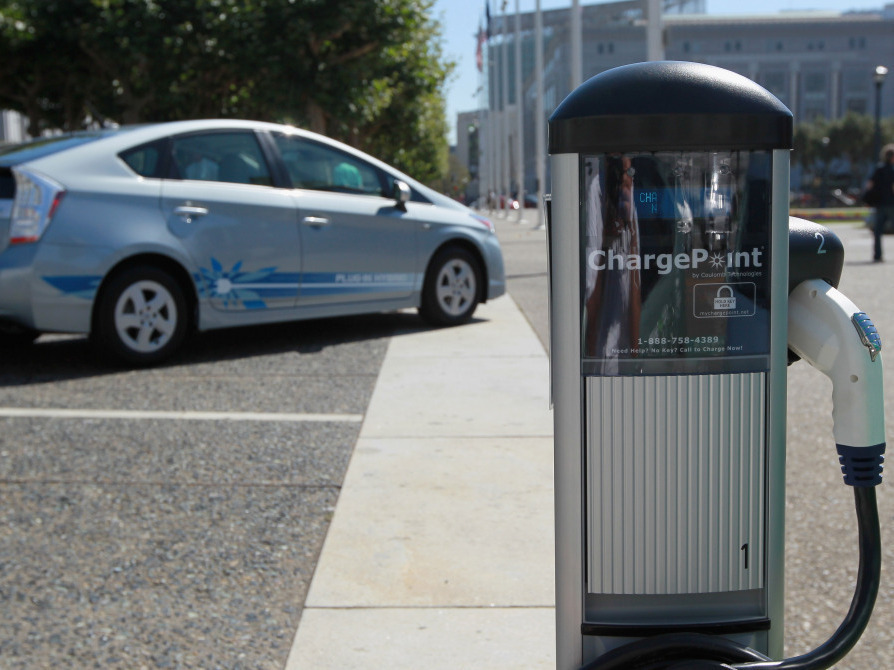 After about 30 miles, the cars come back to recharge.

"Our vehicles just run off a regular household outlet," Rankin says. "We have a regular three-pronged plug that you'd have on any household appliance."

So that part is easy. The hard part is keeping cars charged when they're needed.

"We still gotta play a big cat-and-mouse game all day," he says. "How many vehicles do you have out? What is the current charge? How many electrical outlets do we have that we can charge off of, because if I've got 13 vehicles but I haven't got 13 plugs, then I can't charge them all up as they come in and go out."

And Rankin's vehicles sometimes run out of power away from the charging station. "We know where every outlet is in three states and the District of Columbia."

That in a nutshell is the challenge of electric cars: You need a reliable and widespread source of electrons. That puts pressure on the electricity grid, the power plants and wires, and substations that move electricity.

Take transformers, for example -- the metal cylinders high up on telephone poles. They convert high voltage to the 120 volts you use in your home.

What happens if you plug in a bunch of hungry electric cars in a neighborhood?

"We found that they could handle one to two to maybe three vehicles per home pretty easily if they are charged slowly, the same voltage that you have in your home for appliances, 120 volts," says engineer Carl Imhoff at the Pacific Northwest National Laboratory. Slowly means about eight hours. Imhoff says the grid could handle tens of millions of electric cars at that rate.

But people will want faster charging, which will require bigger transformers and heavy-duty power outlets that deliver 240 volts. And running the grid will get more complicated.

Here's why: Grid operators have to match supply and demand 24/7 because they can't store electricity easily. So when demand drops, they have to turn off power plants somewhere. If demand spikes -- say, a hot day in Texas -- they need to fire up extra generators.

Adding millions of cars to the demand side is like tossing a juggler another ball in mid-juggle. Imhoff says one way to keep the system balanced is to use "smart" chargers that tell grid operators how much juice these cars need.

Nighttime is a good time to charge cars, when there are lots of power plants sitting idle and electricity is cheaper. And for drivers who care about where their electrons are coming from, that's the most common time for utilities to get energy from wind turbines.

Eventually, grid operators could theoretically draw power from cars when they're hooked up, say, to satisfy a surge in demand somewhere else on the grid. Cars themselves would become sources of energy.

"Presumably," says Mark Lauby, with the North American Electric Reliability Corporation, the grid operators' organization, "the automobiles are going to be smart enough to tell me, 'Hey, I'm here and I want to be charged,' or 'Hey, I'm here and I have energy available if you want it.' "

This kind of power-sharing tango between utilities and drivers could make the grid more efficient, but it's also fraught with difficulties. No one wants to wake up to a drained battery, and to get power back from cars, engineers would have to install equipment to convert the batteries' direct current to alternating current.

So for now, grid engineers are waiting to see if drivers come over to electric cars. If they do, they will build.