Accessibility links
Ryan Gosling: Fully Immersed In 'Blue Valentine' The actor stars opposite Michelle Williams in a new drama about a couple whose relationship has soured. He tells Terry Gross it wasn't the average film shoot: Among other things, he moved in for a month with Williams and their onscreen child. 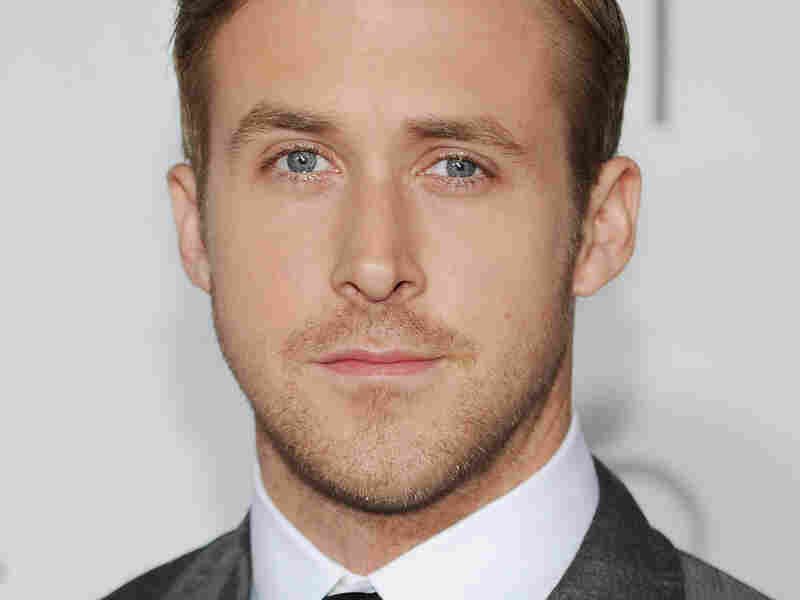 Ryan Gosling received an Academy Award nomination for his role in Half Nelson. He has been nominated for two Golden Globes, one for his performance in this year's Blue Valentine and one for 2007's Lars and the Real Girl. Alberto E. Rodriguez /Getty Images Entertainment hide caption 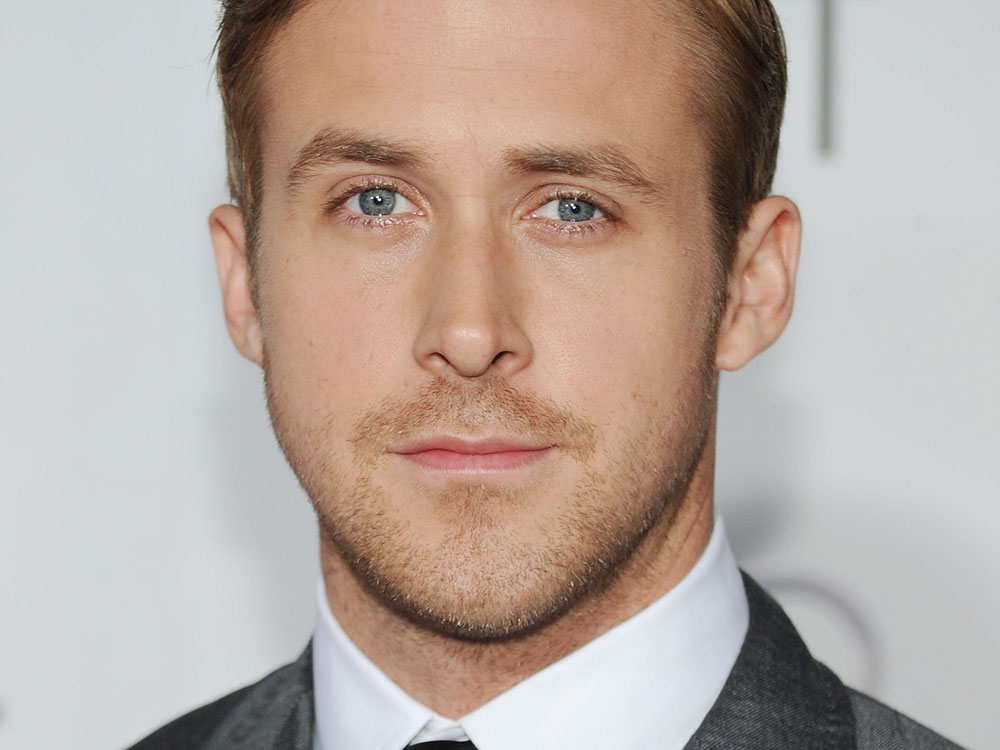 Ryan Gosling received an Academy Award nomination for his role in Half Nelson. He has been nominated for two Golden Globes, one for his performance in this year's Blue Valentine and one for 2007's Lars and the Real Girl.

The independent drama Blue Valentine stars Ryan Gosling and Michelle Williams as a married couple whose relationship has eroded over time; once madly in love, they spend most of their time fighting now, trying to figure out whether they can -- or should -- make their relationship work.

Filmmaker Derek Cianfrance shot the picture on a hand-held camera, giving the footage a shaky, realistic quality. He told Williams and Gosling that he wanted to divide the film shoot into three parts. During the first part, they would shoot all of the flashback scenes, in which Gosling and Williams' characters were still madly in love. During the third part, they'd shoot the rest of the movie, in which the relationship takes a nose dive.

And during the second part -- which lasted a month -- Cianfrance wanted Williams and Gosling to move in together, along with the child actor who plays their daughter. In the same house their characters live in in the movie, no less.

The three lived together for a month. (But only during the day: At night, Williams went home to her daughter, Matilda.)

"During the month, we tried to dismantle this thing that we had been building," Gosling tells Fresh Air contributor Dave Davies. "[Originally,] we all worked really hard to create this love story portion, when they're falling in love. We wanted it to feel genuine and real and true. And we spent all of this time building it up, and then we had to tear it down." 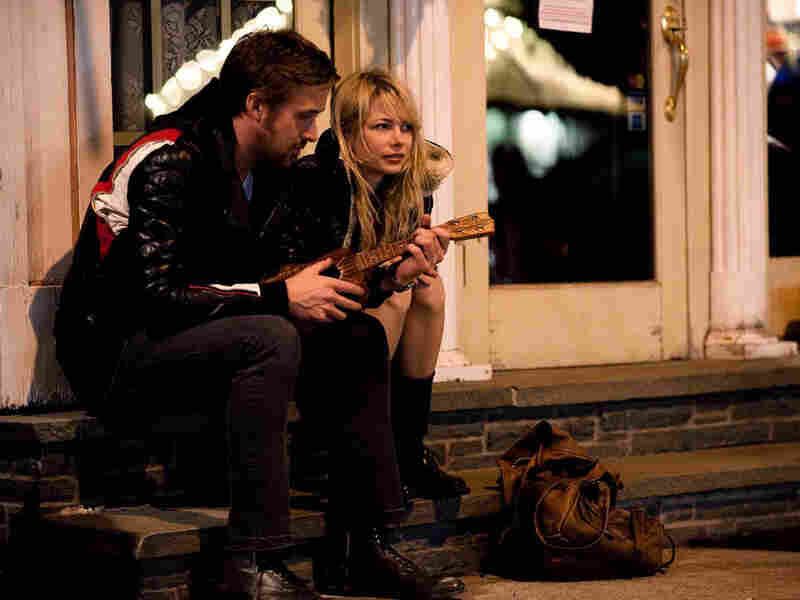 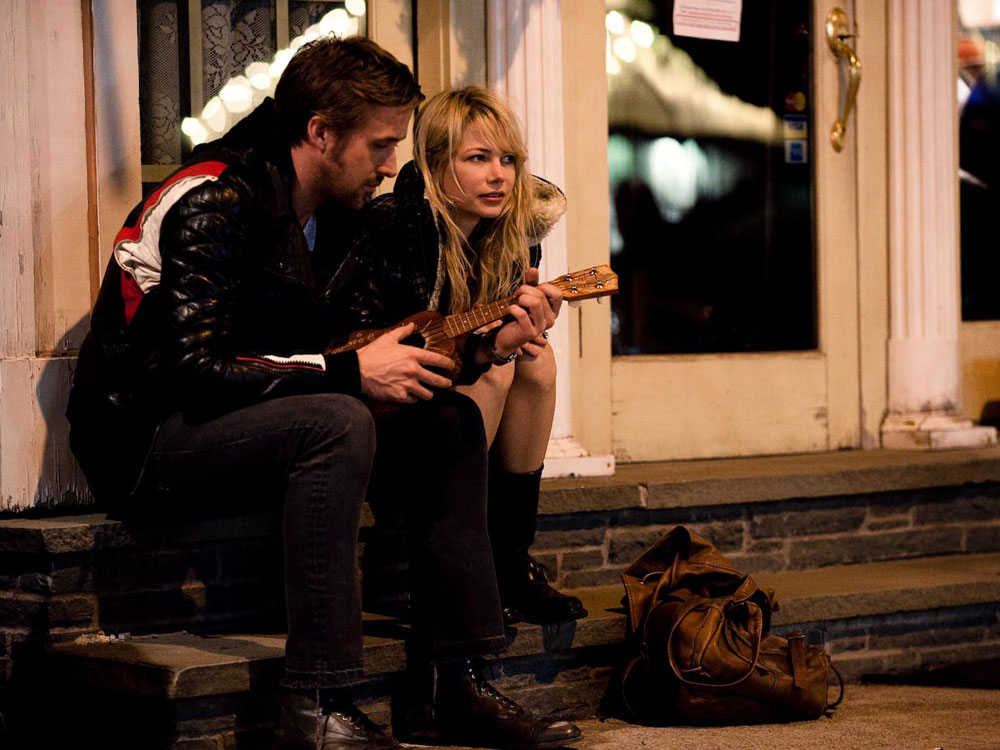 Cianfrance asked Williams and Gosling to take their characters' wedding photos, put them in a wheelbarrow and douse them in kerosene -- and then set them on fire.

"We also celebrated fake Christmas and put up Christmas trees, and baked birthday cakes and bought birthday presents, and went to Sears," Gosling says. "We fought all day, and then we'd have to take [our characters' daughter] Faith to the family fun park ... whatever we could do to create real memories, so when it came time to shoot the [last] part of the film, we were drawing on real memories."

Gosling tells Davies that Blue Valentine was the first film project he's worked on where he forgot along the way that he was making a film.

"Most movies, you have to try and forget you're making a movie, because there are trailers and booms and lights and marks, and it's everywhere," he says. "And with this, you're trying to remember that it is a movie, because it's so easy to get lost in it."

On the differences between filming the flashbacks and the later scenes

"When we were shooting the scenes in the past, we shot on film because it had a romantic quality to it. And it would all be in one take. No do-overs. Everything happened for the first time, and then it was over. And we would share the frame together. When you're working that way, it's easy to maintain a mystery, because you never have to go back and revisit a moment, and you can hide behind these personas that you've created -- which is a lot like when you're first falling in love.

When we were doing the latter part of the film, it was all shot on digital, which has a clinical, surveillance-camera feeling. And we were locked off into singles -- we were never sharing the frame. And we would do takes 50 times. We shot one scene for two days in the shower, just all day. So when you're doing 50 takes with somebody, there's nowhere to hide. It's very exposing."

"I was very confused. It seems like I don't really understand this rating system. I was told it's because my character performs oral sex on his wife, and I thought, 'There's plenty of movies with men receiving oral sex from women with R ratings.' It seemed like a double standard. On top of that, it seemed like there are horror movies that are like torture-porn that are R rated. What a lot of people don't understand about the NC-17, which I didn't understand, is that you can't show it in major theater chains -- and you can't even air spots for your film on television. It really stigmatizes the movie."

On performing on The Mickey Mouse Club

"These kids were prodigies. Not all of us. I wasn't. But you look at someone like Christina Aguilera, who was singing like Etta James [as an adolescent]. And you see someone who is realizing their destiny. This is where they're supposed to be and what they're supposed to be doing -- and the same goes for a few of the other kids. I realized that my destiny wasn't that. I could make it and do enough to get by on the show, but it wasn't my calling. So I was depressed by that, but I was also encouraged to go out and find what [my calling] was. As a result of not being as talented as the other kids, I didn't work a lot, so I spent a lot of time in Disney World, riding the rides and walking around. And this made a big impression on me. I was very impressed by Walt Disney and the idea that you could have a dream and you could realize it to the point where people could walk around within it. ... It still resonates with me. I wanted to be somebody who believed in their ideas that much."