Accessibility links
Obama To Nominate Whistle-Blower Defender A federal office that ran aground under the Bush administration is about to get a new leader. The White House plans to nominate Carolyn Lerner to run the Office of Special Counsel, which represents federal whistle-blowers and other victims of discrimination within the government. 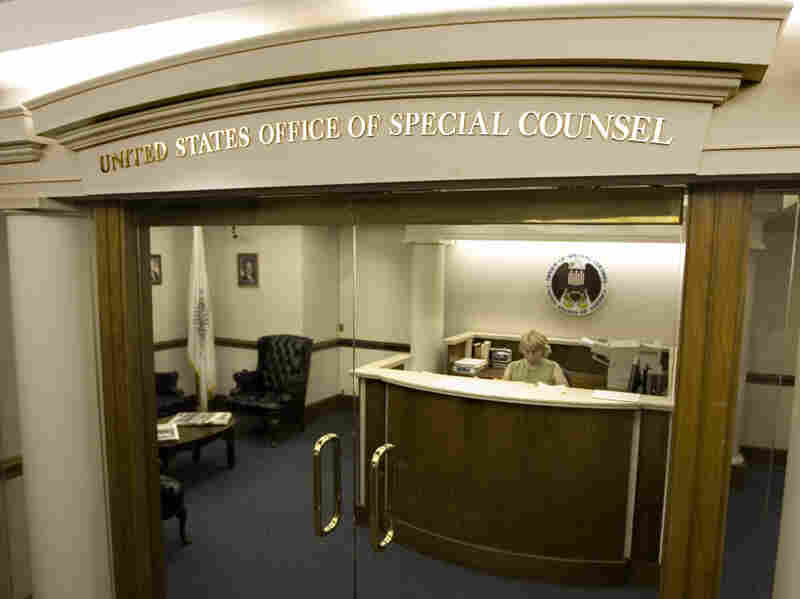 On May 6, 2008, about 20 FBI agents searched the work area of Scott Bloch at the Office of Special Counsel. Bloch was removed from office at the end of the Bush administration and pleaded guilty to withholding information from Congress. After two years, the White House plans to nominate a replacement. J. Scott Applewhite/AP hide caption

A federal office that ran aground under the Bush administration is about to get a new leader. The White House plans to nominate Carolyn Lerner to run the Office of Special Counsel, which represents federal whistle-blowers and other victims of discrimination within the government.

Whistle-blower groups applaud the nomination and call it long overdue.

"She's a great choice," says Debbie Katz, a private lawyer who represents government whistle-blowers. "She's going to have her work cut out for her."

Katz, who is familiar with Lerner's work, says the new special counsel "has a lot to do to restore credibility in this office, to make federal employees willing to go to that office with their complaints. The morale in that office is terrible now."

The White House plans to nominate Carolyn Lerner to run the Office of Special Counsel.

The morale problem is partly due to the tumultuous reign of the last head of the office, Scott Bloch. While the U.S. special counsel is supposed to serve a five-year term, Bloch never made it to the end of his term. He was removed from office at the end of the Bush administration and later pleaded guilty to withholding information from Congress.

"I gave a lot of credit to the career staff for being able to get their work done in the eye of Hurricane Scott," says Jim Mitchell, who was the office's spokesman until Bloch ousted him. "He became very defensive after the FBI raided the office."

That FBI raid in 2008 was part of an inquiry into whether Bloch erased files from his computer to obstruct a federal investigation. The investigation focused on whether Bloch had retaliated and discriminated against his employees.

Danielle Brian of the Project on Government Oversight calls Bloch's tenure one of the most bizarre episodes in whistle-blower history. "Not only did he really not believe in the mission of the agency, but he was actually retaliating against his own employees, which is quite extraordinary, given that his job was to protect employees from this retaliation."

"As Special Counsel I made people on both sides mad," Bloch said in a written statement to NPR on Tuesday. "I made the Bush Administration mad by going after Karl Rove and making high ranking Republican officials leave office, causing 1000 planes to be grounded through investigations of the FAA, because that is the nature of the job."

Since the start of Bloch's tenure in 2004, whistle-blowers across the federal government have said they have had no good place to turn. "Literally hundreds of whistle-blowers every year who can't afford a due process hearing or trial are defenseless when they try to defend the public against betrayals of trust," says Tom Devine of the Government Accountability Project. "They can be fired virtually at will, and if they go to the Office of Special Counsel, they'll be on an endless treadmill that goes nowhere."

The same is true of government workers fired for their race, gender, religion, sexual orientation or other protected classes. The Office of Special Counsel is supposed to stand up for them, but experts in the field say the office has been a dysfunctional shell for years now.

Brian believes the White House's inaction -- leaving the position vacant for two years -- has had consequences. "The lack of strong legal protections for these employees is what is driving these people outside channels to the newspapers and to WikiLeaks," she says.

The Obama administration has taken steps to help whistle-blowers in other ways. The White House is pushing hard for a whistle-blower bill in Congress that now seems on the verge of passing. In light of that intense activity, government oversight groups were baffled that the president took so long to nominate someone to run the Office of Special Counsel.

"Frankly, I stopped asking, because how many times can you ask and hear, 'We're getting to it?' " said an exasperated Brian last week.

"It seems like we're waiting for Godot," added Devine of the Government Accountability Project.

Godot arrives with Lerner's nomination. She founded a civil rights and employment law firm in Washington, D.C., and she has worked on the sorts of retaliation and discrimination cases that characterize the workload of the Office of Special Counsel. She must be confirmed by the Senate before her five-year term can begin.