Accessibility links
Dishes Still Dirty? Blame Phosphate-Free Detergent A simple chore turned into a frustrating mystery for many people across the country as their dishes, glasses and pans came out of dishwashers spotted, filmy or still dirty. Detergent makers reworked formulas to comply with laws in 17 states banning phosphates, which cut kitchen grime but also pollute waterways. 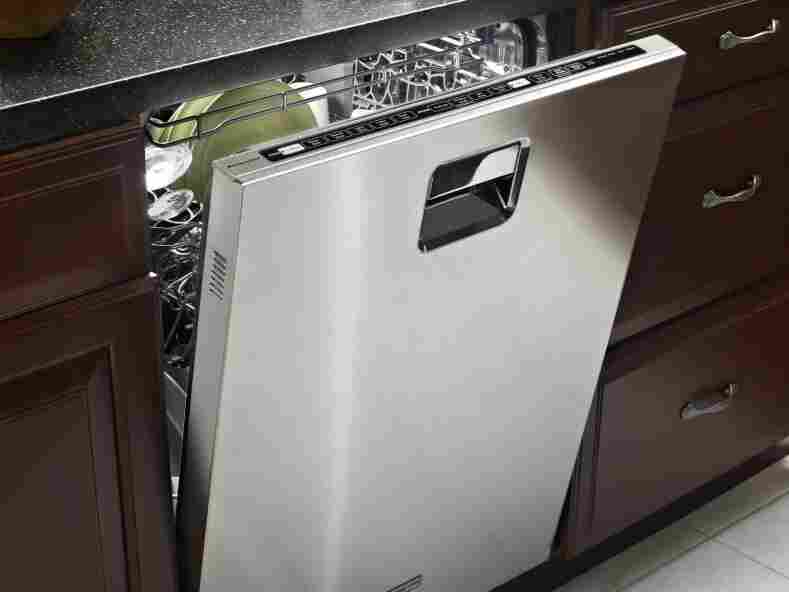 Even if you have a new dishwasher, you may have found your dishes just aren't as clean and spotless as they used to be. Dish detergent makers changed their formulas because of environmental concerns, and the ingredient that had to go just happened to be the industry's chosen grime-fighter. PRNewsFoto/KitchenAid hide caption

Is your dishwasher not working the way it used to? Earlier this year, with little fanfare, detergent makers reworked their formulas.

This was supposed to be good for waterways. But it turned a simple chore into a frustrating mystery for many people across the country.

A couple of months ago, Sandra Young from Vernon, Fla., started to notice that something was seriously amiss with her dishes.

"The pots and pans were gray, the aluminum was starting to turn black, the glasses had fingerprints and lip prints still on them, and they were starting to get this powdery look to them," Vernon says. "I'm like, oh, my goodness, my dishwasher must be dying; I better get a new dishwasher."

Young's not alone. Many people across the country are tearing out their hair over stained flatware, filmy glasses and ruined dishes.

Sue Wright from Austin, Texas, says for months her cups and glasses have been coming out of her year-old dishwasher covered with black specks. She called three repairmen to her kitchen, but her dishes were still dirty.

"I looked at a plumber's rear end for about two months this summer sticking out from under my sink," Wright says. "I was just totally frustrated. I couldn't figure out what was going wrong."

Finally, after months of aggravation and expense, Wright found out the real reason for her speckled cups: This summer, detergent makers took phosphates out of their detergents.

But dirty and damaged dishes are turning many people into skeptics, including Wright.

"I'm angry at the people who decided that phosphate was growing algae. I'm not sure that I believe that," Wright adds.

Sandra Young was so mad that she called Procter & Gamble, which makes Cascade, to complain. But when she did, a company representative told her to be more careful about which pans she puts into her dishwasher.

"He said, 'Well, if you're really having that hard of a problem, maybe you should wash your dishes by hand.' Which I thought was kind of strange for an automatic dishwashing company."

Susan Baba from Procter & Gamble says the company had no choice. It just wasn't feasible to make detergent with phosphates for some states and without them for others.

"You know, this isn't really a huge environmental win," she says.

That's because phosphates are wonder ingredients. They not only strip food and grease from dishes but also prevent crud from getting reattached during the wash. So she says without phosphates, people have to wash or rinse their dishes before they put them in the dishwasher, which wastes water. Or they run their dishwasher twice, which wastes electricity.

Dennis Griesing of the American Cleaning Institute, a trade group, says it could take time, but phosphate-free detergents will improve. That's what happened with laundry detergents after phosphates were removed from them years ago. He says these inconveniences are part of a bigger trend.

"We're going though a very significant readjustment in our lives to accommodate our ecological needs," Griesing says.

But not everyone is willing to adjust. Sandra Young figured out a way to undo the phosphate ban -- at least in her own kitchen.

She bought some trisodium phosphate at a hardware store and started mixing her own formula.

"It seems to be working pretty good," Young says.

Other people have given up on their machines altogether and are washing dishes by hand. But some are switching to other brands and making peace with phosphate-free detergents.