Accessibility links
Neurotheology: This Is Your Brain On Religion Dr. Andrew Newberg has scanned the brains of praying nuns, chanting Sikhs and meditating Buddhists in an effort to address life's burning questions: Who are we? What's the meaning of life? What does it mean to be religious? 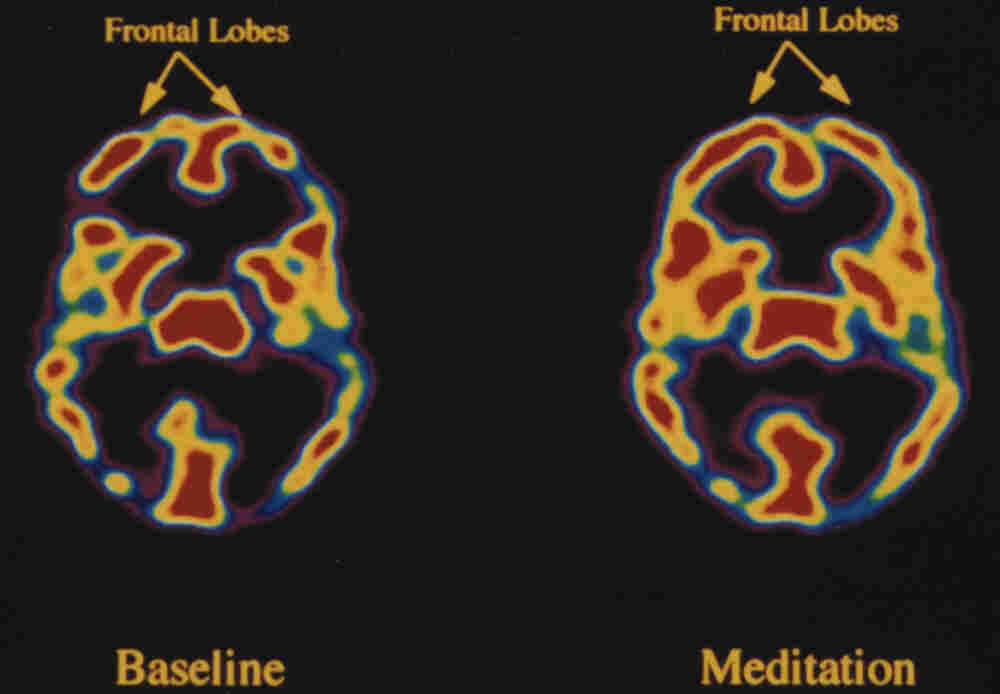 ... And This Is Your Brain On Buddha: As part of his research, Andrew Newberg studied the brain activity of experienced Tibetan Buddhists before and during meditation. Newberg found an increase of activity in the meditators' frontal lobe, responsible for focusing attention and concentration, during meditation. He found similar results in a similar study of older individuals experiencing memory problems. Andrew Newberg hide caption

For thousands of years, religion has posed some unanswerable questions: Who are we?  What's the meaning of life? What does it mean to be religious?

In an effort to address those questions, Dr. Andrew Newberg has scanned the brains of praying nuns, chanting Sikhs and meditating Buddhists. He studies the relationship between the brain and religious experience, a field called neurotheology. And he's written a book, Principles of Neurotheology, that tries to lay the groundwork for a new kind of scientific and theological dialogue.

"[We] evaluate what's happening in people's brains when they are in a deep spiritual practice like meditation or prayer," Newberg says. He and his team then compare that with the same brains in a state of rest. "This has really given us a remarkable window into what it means for people to be religious or spiritual or to do these kinds of practices."

Newberg's scans have also shown the ways in which religious practices, like meditation, can help shape a brain. Newberg describes one study in which he worked with older individuals who were experiencing memory problems. Newberg took scans of their brains, then taught them a mantra-based type of meditation and asked them to practice that meditation 12 minutes a day for eight weeks. At the end of the eight weeks, they came back for another scan, and Newberg found some dramatic differences.

"We found some very significant and profound changes in their brain just at rest, particularly in the areas of the brain that help us to focus our mind and to focus our attention," he says.

Is This Your Brain On God?

According to Newberg, many of the participants related that they were thinking more clearly and were better able to remember things after eight weeks of meditation. Remarkably, the new scans and memory tests confirmed their claims.

"They had improvements of about 10 or 15 percent," Newberg says. "This is only after eight weeks at 12 minutes a day, so you can imagine what happens in people who are deeply religious and spiritual and are doing these practices for hours a day for years and years."

Andrew Newberg is the director of research at the Myrna Brind Center of Integrative Medicine at Thomas Jefferson University and Hospital in Philadelphia. Courtesy of Andrew Newberg hide caption

Andrew Newberg is the director of research at the Myrna Brind Center of Integrative Medicine at Thomas Jefferson University and Hospital in Philadelphia.

Newberg emphasizes that while neurotheology won't provide definitive findings about things like the existence of a higher power, it will provide a deeper understanding of what it means for a person to be religious.

"For those individuals who want to go down the path of arguing that all of our religious and spiritual experiences are nothing more than biological phenomena, some of this data does support that kind of a conclusion," Newberg says. "But the data also does not specifically eliminate the notion that there is a religious or spiritual or divine presence in the world."

Because of that, Newberg says the success of neurotheology hinges on open-mindedness.

"One could try to conclude one way or the other that maybe it’s the biology or maybe God's really in the room, but the scan itself doesn't really show that," Newberg says. "For neurotheology to really work as a field it needs to be very respectful and open to both perspectives."

"Neurotheology" is a unique field of scholarship and investigation that seeks to understand the relationship specifically between the brain and theology, and more broadly between the mind and religion. As a topic, neurotheology has garnered substantial attention in the academic and lay communities in recent years. Several books have been written addressing the relationship between the brain and religious experience and numerous scholarly articles have been published on the topic.  The scientific and religious communities have been very interested in obtaining more information regarding neurotheology, how to approach this topic, and whether science and religion can be integrated in some manner that preserves, and perhaps enhances, both.

If neurotheology is to be considered a viable field going forward, it requires a set of clear principles that can be generally agreed upon and supported by both the theological or religious perspective and the scientific one as well.  The overall purpose of this book is to set forth the necessary principles of neurotheology which can be used as a foundation for future neurotheological discourse and scholarship.

It is important to infuse throughout the principles of neurotheology the notion that neurotheology requires an openness to both the scientific as well as the spiritual perspectives.  It is also important to preserve the essential elements of both perspectives.  The scientific side must progress utilizing adequate definitions, measures, methodology and interpretations of data.  The religious side must maintain a subjective sense of spirituality, a phenomenological assessment of the sense of ultimate reality that may or may not include a Divine presence, a notion of the meaning and purpose in life, an adherence to various doctrinal processes, and a careful analysis of religion from the theological perspective.

It is at the neurotheological juncture that the science and religion interaction may be most valuable and help establish a more fundamental link between the spiritual and biological dimensions of the human being.  Therefore, neurotheology, which should provide an openness to a number of different perspectives, might also be viewed as a nexus in which those from the religious as well as scientific side can come together to explore deep issues about humanity in a constructive and complementary manner.  There, no doubt, will be differing view points that will be raised throughout this process, some of which may be more exclusive of one perspective or the other.  However, it should be stressed that for neurotheology to grow as a field, it is imperative that one remains open, at least somewhat, to all of the different perspectives including those that are religious or spiritual, cultural, or scientific.

In addition to the complex interrelationship between science and religion over the years, neurotheological research must draw upon the current state of modern scientific methods and existing theological debates. Science has advanced significantly in the past several decades with regard to the study of the human brain. Neurotheology should be prepared to take full advantage of the advances in fields of science such as functional brain imaging, cognitive neuroscience, psychology, and genetics.  On the other hand, neurotheological scholarship should also be prepared to engage the full range of theological issues. That theology continues to evolve and change from the more dogmatic perspectives of the past, through natural theology and systematic theology, neurotheology must acknowledge that there are many fascinating theological issues that face each religious tradition.

When considering the primary reasons for developing neurotheology as a field, we can consider four foundational goals for scholarship in this area. These are:

1.  To improve our understanding of the human mind and brain.

2.  To improve our understanding of religion and theology.

3.  To improve the human condition, particularly in the context of health and well being.

4.  To improve the human condition, particularly in the context of religion and spirituality.

These four goals are reciprocal in that they suggest that both religious and scientific pursuits might benefit from neurotheological research. The first two are meant to be both esoteric as well as pragmatic regarding scientific and theological disciplines. The second two goals refer to the importance of providing practical applications of neurotheological findings towards improving human life both individually and globally.

Given the enormity of these tasks to help understand ourselves, our relationship to God or the absolute, and the nature of reality itself, neurotheology appears poised to at least make a substantial attempt at addressing such issues. While other theological, philosophical, and scientific approaches have also tried to tackle these "big" questions, it would seem that neurotheology holds a unique perspective. It is one of the only disciplines that necessarily seeks to integrate science and theology, and if defined broadly, many other relevant fields. And this is perhaps the greatest gift of neurotheology, the ability to foster a rich multidisciplinary dialogue in which we help others get it right so that we can advance the human person and human thought as it relates to our mental, biological, and spiritual selves. 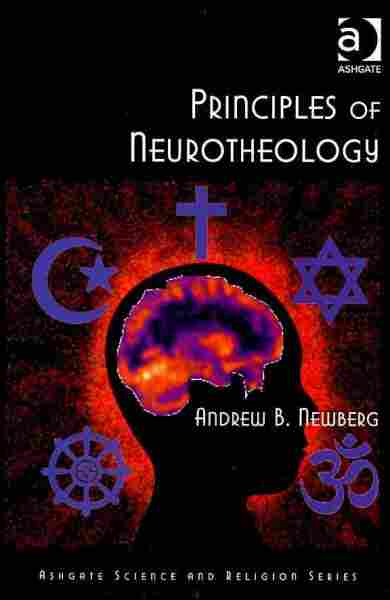 by Andrew B. Newberg