Accessibility links
John Hammond: The Ear Of An Oracle Most great talent scouts reign for about a generation, if they're lucky, but John Hammond dominated four generations. From Billie Holiday and Benny Goodman to Bob Dylan and Bruce Springsteen, Hammond was pivotal in the discovery of some of the 20th century's most important musical figures. 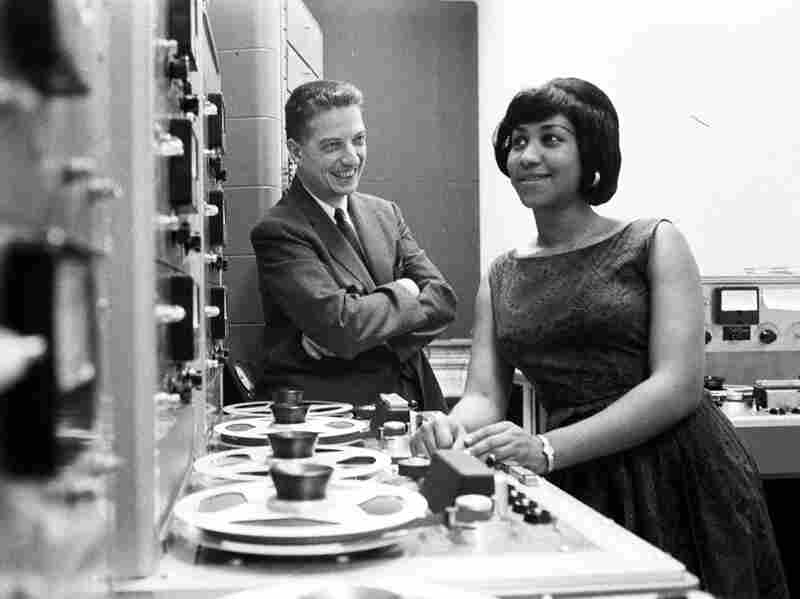 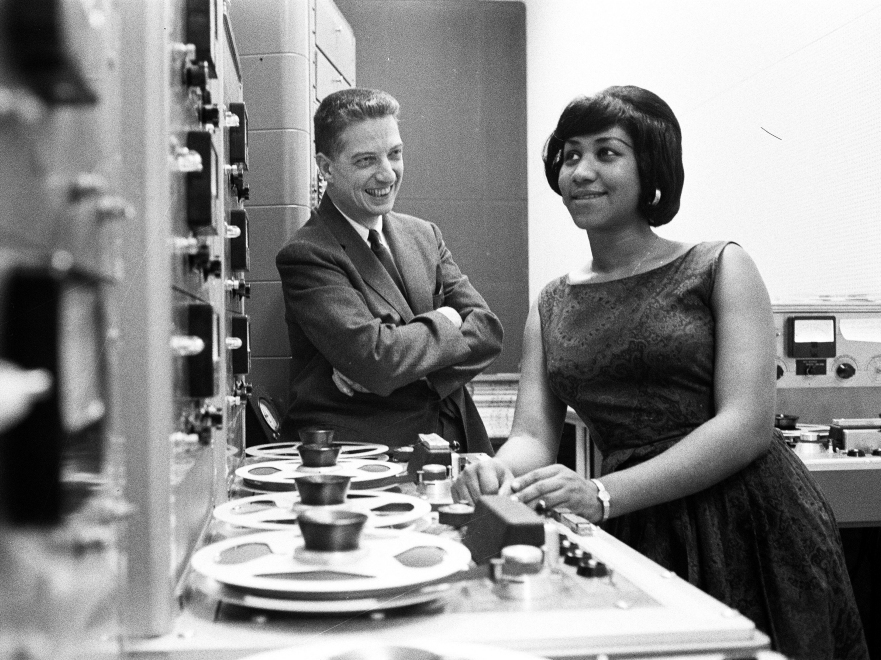 Aretha Franklin and John Hammond in 1961.

Most great talent scouts reign for about a generation, if they're lucky. But John Hammond dominated four generations. He never wrote a tune, never played a horn and never even sang a song. But he had an uncanny ear for finding those who did, and it made him unique in the record business. This is because most record executives are in it for the wealth. Hammond was in it for kicks. Today would have been his 100th birthday.

Hammond's ear gave him other yardsticks of value, and the vision of an oracle. It could drill through the babble of fashion and the fog of obscurity to the essence of a solitary original voice. He had the inner compass of a rebel, and it led him to the most secret places where other rebels hung out. Hammond was pivotal in the discovery and recording of a procession of the 20th century's most important musical figures -- from Billie Holiday and Benny Goodman to Bob Dylan and Bruce Springsteen.

Billie Holiday was Hammond's first great discovery -- she recorded her first record in 1933, when she was 16 and Hammond was 22. For most, she was an acquired taste. Forty-four years ago, I sat in Hammond's CBS office with a small tape recorder and asked him what he had heard in her that nobody else did.

"In 1933, there was a good blues singer called Monette Moore, who started her own joint on 133rd Street, between Lenox and 7th Avenue," Hammond said. "So she had a 15-year-old girl singing there, and I listened to this girl. I just couldn't believe my ears that here was a singer who sounded like an instrumentalist, like one of the most advanced instrumentalists there had ever been. So I started talking to Billie, and Billie had had a fairly checkered career by that time. She's been in jail and everything. ... But anyway, Billie was out of sight as an artist, and I took Benny up to hear her, and Benny thought she was great."

Benny Goodman was still unknown in 1933. Hammond had met him that fall and begun booking record dates for him. He didn't exactly "discover" Goodman, but he was deeply influential. When Goodman's breakthrough finally came in 1936, Hammond suddenly became a kind of regent to the King of Swing.

Hammond haunted the New York bars and clubs and often brought Goodman along. Years later, I asked Goodman about those legendary hunts, and he put it into perspective.

"We used to go to a lot of spots at night," Goodman said. "We'd go to listen. We used to listen to an awful lot of crap, too. Did John ever tell you that?"

Hammond's reputation rose with the Goodman tide, then was cemented when he found a nine-piece band in a Kansas City dive called the Reno Club -- Count Basie was the bandleader. Eight weeks later, Hammond took the band out of Kansas City. Thirty years later, the memory of it all still excited him.

"It was only a nine-piece band. But it was the greatest reed section Basie ever had," Hammond says. "Buster Smith, Jack Washington and Lester Young. The rhythm section was, of course, the greatest. ... Well, even then, it was just unbelievable what I heard in Kansas City."

But not as unbelievable as the sound he brought Benny Goodman in 1939 -- the electric guitar was almost unknown when Hammond spotted its first great master, Charlie Christian. Christian was earning $7.50 a week in Oklahoma City.

"Mary Lou Williams told me about this great guitar player from Oklahoma City. I flew out there on my way to California, to a place called the Ritz Cafe," Hammond says. "And, of course, Charlie was a genius. ... But Charlie was making $2.50 a night, three nights a week. The following week, he was working with Benny at the Victor Hugo Cafe. And the first number was 'Rose Room,' which lasted for 47 minutes. And the whole place erupted."

In Charlie Christian, Hammond not only found a brilliant musician. He also helped unlock the sound that would one day transform American music. It would be his last decisive discovery for 20 years.

When he rejoined Columbia Records in 1958 to do some reissues, he didn't expect a second act. He was wrong. The curtain went up in 1960 when Aretha Franklin walked in.

"A guy called Curtis Lewis brought in a demo disc of some tunes of his," Hammond said. "And there was one tune called 'Today I Sing the Blues,' and it was Aretha. And I listened and I said, 'This is the best thing I've heard since Billie Holiday. Who is she? He said she's some girl out in Detroit. It took me about two months to track her down. I did two albums with Aretha. The first album is the one I'm proud of."

Many consider that first album one of her best. But it was also one of her least commercial. A familiar pattern was repeating itself. Hammond's instinct for pure, untarnished talent may have enriched posterity. But it was for others to tame such talent into sales in the here and now. Hammond's taste for rebels and indifference to commerce was only beginning to test the patience of his bosses at Columbia.

"Well, Bob Dylan is a guy I signed to Columbia in '61," he said, "and I think he signed with us because we had the guts to sign Pete Seeger."

Dylan was a sideman on a Carolyn Hester session when Hammond first spotted him. His liked Dylan's look, his sound and his presence, as Hammond told me 35 years ago on a radio program.

"Dylan was a born rebel, and I figured that, you know, Dylan could capture an audience of kids that Columbia had lost years before," Hammond said. But when Hammond's bosses heard Dylan's voice, they were less than thrilled.

"Hammond's folly [they said]. The vice president of Columbia Records said just right off, the most horrible thing he'd ever heard in his life," he said. "Hammond's folly."

Hammond said that Columbia would not authorize signing Dylan. So, he said, "I signed him anyway." In 1967, he did the same with another offbeat find, Leonard Cohen. To protect himself, Hammond kept his projects simple and economical. Dylan's first album cost $402 to make.

By the late '60s, Hammond's reputation as a cultural Cassandra had become so celebrated, artists didn't just want to be "discovered." They wanted the distinction of being discovered by the legendary Hammond himself. One of them was Bruce Springsteen. Over lunch at the Russian Tea Room, Hammond told me how Springsteen's manager, Mike Appel, had first come to see him.

"Mike didn't come to see me on his own. He came because Bruce directed him to come to me," Hammond said. "And his opening remark to me was, 'You're supposed to be the guy who discovered. I want to see whether you have any ears. I have someone who's better than Dylan.' So I said, 'Shut up. I don't want to hear anyone who's like anybody else.' Bruce was sitting in the corner. I asked him to get out his guitar. ... And I suddenly realized that this was not anyone like Dylan remotely. This was his own guy with his own experiences. Then I asked him if he ever did anything he wouldn't dare record. Yeah, he said, and that's when he played 'If I Was the Priest.' That's when I asked [if he had] been brought up by nuns. And he said of course."

If you're wondering how Billie Holiday led to Bruce Springsteen, it's a good question. One answer is, Hammond was a hive of contradictions. A born aristocrat with a Vanderbilt pedigree, he was a popular front leftist in the '30s and a Mother Jones-carrying liberal in the '70s and '80s. Indifferent to commercial pressures, he spent most of his career in the commercial bazaar of Columbia Records.

His radar had a way of bypassing the talented, and even the very talented. Instead, it somehow found the lighthouses whose work made us reimagine what music could be. They never grow old.

Hammond died in 1987. At his memorial, Springsteen sang Dylan's "Forever Young." Today, John Hammond would be 100.