Accessibility links
Justice Department Sues BP, Others Over Gulf Spill The Obama administration's lawsuit asks that the companies be held liable without limitation for all removal costs and damages caused by the oil spill, including damages to natural resources. The lawsuit also seeks civil penalties under the Clean Water Act. 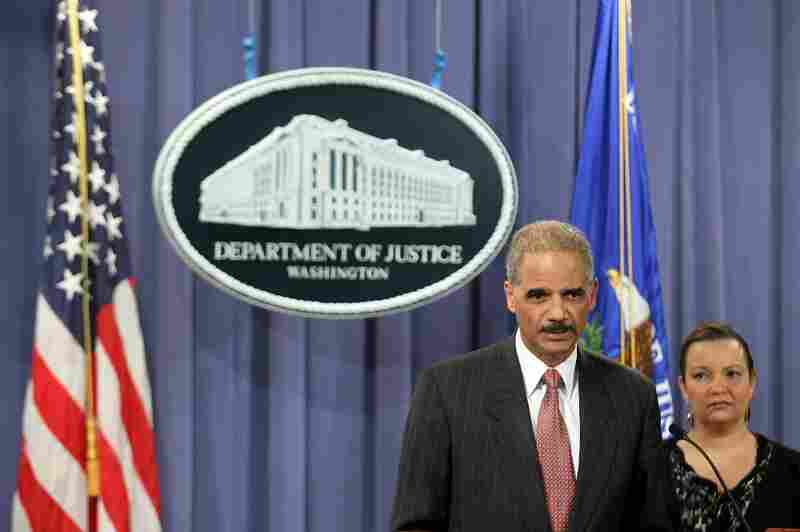 Attorney General Eric Holder announces a civil lawsuit against BP and eight others in an effort to recover billions of dollars from the Gulf oil spill. At right is Environmental Protection Agency Administrator Lisa Jackson. Alex Wong/Getty Images hide caption

Attorney General Eric Holder announces a civil lawsuit against BP and eight others in an effort to recover billions of dollars from the Gulf oil spill. At right is Environmental Protection Agency Administrator Lisa Jackson.

The Justice Department on Wednesday sued BP and eight other companies in the Gulf oil spill disaster in an effort to recover billions of dollars from the largest offshore spill in U.S. history.

The Obama administration's lawsuit asks that the companies be held liable without limitation under the Oil Pollution Act for all removal costs and damages caused by the spill, including damages to natural resources. The lawsuit also seeks civil penalties under the Clean Water Act.

Attorney General Eric Holder said the lawsuit represents the beginning of a long legal fight. Justice Department lawyers have been working night and day, he says, to hold BP, Transocean and other companies accountable for the explosion and the spill that followed.

"While today's civil action marks a crucial first step forward, it is not ... a final step," he said at a news conference. "Both our criminal and civil investigations are continuing, and our work to ensure that the American taxpayers are not forced to bear the costs of restoring the Gulf area and its economy goes on."

The federal lawsuit says inadequate cementing of the well contributed to the disaster. Similar charges were made by BP in its internal investigation, and by the independent presidential oil spill commission. But Halliburton Co., the contractor in charge of mixing and pumping the cement, is not named in the suit.

Holder said additional defendants could be added to the lawsuit.

The lawsuit doesn't ask for a specific amount of money.

Tony West, assistant attorney general for the Justice Department's civil division, said it's going to take years to fully quantify what the damages are to the environment, to natural resources, and any other economic damages.

"We've explicitly reserved in our complaint the right to come back and add claims or to add defendants if necessary," he said.

Environmental Protection Agency Administrator Lisa Jackson said plans are under way to try and give money back to Gulf communities.

"This is about getting a fair deal for the region that suffered enormous consequences from this disaster," she said.

An explosion that killed 11 workers at BP's Macondo well in April led to oil spewing from the company's undersea well -- more than 200 million gallons in all by the government's estimate. BP disputes the figure.

The department filed the suit in federal court in New Orleans.

A Guide To The Many Inquiries Into The BP Oil Spill

Anadarko and MOEX are minority owners of the well that blew out. Transocean owned the rig that BP was leasing.

Transocean disputed the allegations, arguing it should not be held liable for the actions of others. "No drilling contractor has ever been held liable for discharges from a well under the Oil Pollution Act of 1990,'' the company said in a statement e-mailed to The Associated Press. "The responsibility for hydrocarbons discharged from a well lies solely with its owner and operator.''

QBE/Lloyd's can be held liable only up to the amount of insurance policy coverage under the Oil Pollution Act and is not being sued under the Clean Water Act.

The lawsuit alleges that safety and operating regulations were violated in the period leading up to April 20.

Democratic Rep. Edward J. Markey, a Democrat and a member of the House energy panel that is investigating the spill, acknowledged that the government will have a tough fight on its hands since BP has already taken an aggressive stance regarding its liability.

"It may have taken these companies months to cap their well, but they will spend years trying to cap their financial obligations to the people of the Gulf,'' Markey said. "That is why it is vital for the Obama administration to swiftly advance this legal action.''

Before Wednesday, potential class-action lawsuits had been filed in the Gulf oil spill by fishing and seafood interests, the tourism industry, restaurants and clubs, property owners losing vacation renters -- even vacationers who claim the spill forced them to cancel and lose a deposit. So far, more than 300 lawsuits have been spawned by the spill and consolidated in federal court in New Orleans.

Wednesday's move by the Justice Department follows the Obama administration's decision not to open new areas of the eastern Gulf and Atlantic seaboard to drilling. That marked a reversal from an earlier decision to hunt for oil and gas, an announcement the president himself made three weeks before the spill.

The staff of a presidentially appointed commission looking into the spill has said that the disaster resulted from questionable decisions and management failures by three companies: BP, the well owner and operator; Transocean, the owner of the Deepwater Horizon rig; and Halliburton.

The panel found 11 decisions made by these companies increased risk. Most saved time, and all but one had a safer alternative.

Separately, an administrator is doling out money to Gulf oil spill victims from a $20 billion fund of BP money.

The Justice Department is not the first government entity to sue BP. Alabama Attorney General Troy King filed federal lawsuits in August on behalf of the state against BP, rig owner Transocean, cement contractor Halliburton Energy Services Inc. and other companies that worked on the ill-fated drilling project.

U.S. District Judge Carl Barbier is presiding over most of the consolidated federal suits. In September, Louisiana Attorney General James "Buddy'' Caldwell's office asked Barbier to create a "government case track'' to handle government-related suits separately from other claims. The judge hasn't ruled on that request yet.

NPR's Carrie Johnson contributed to this report, which contains material from The Associated Press.