Accessibility links
Yale Returns Machu Picchu Artifacts To Peru After nearly 100 years, a collection of antiquities from the Inca site of Machu Picchu is going home. The artifacts have been at the center of a long and bitter custody battle between the government of Peru and Yale University. 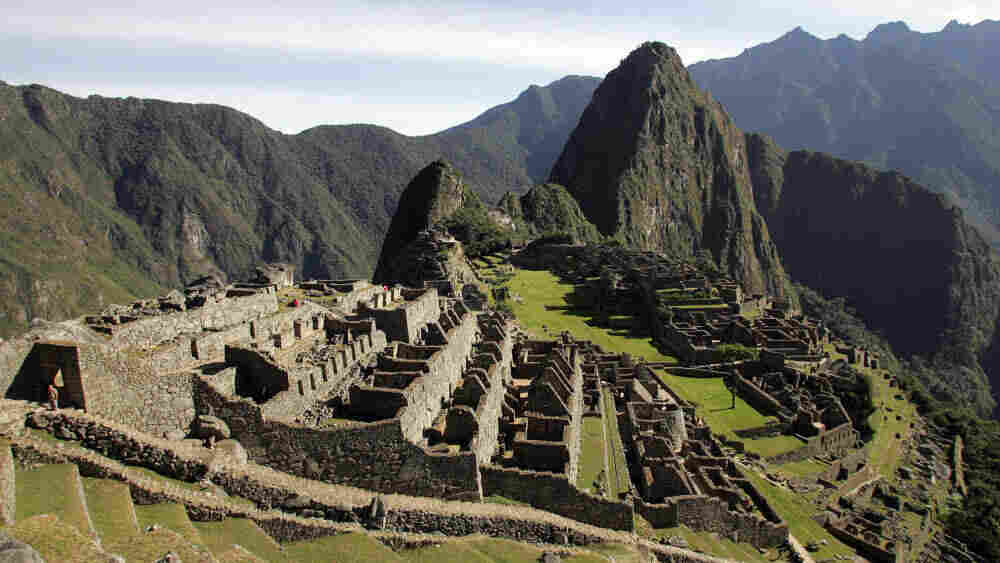 In the early 1900s, Machu Picchu -- an Inca site perched high in the Andes mountains -- was well known to locals, but largely forgotten internationally. In 1911, explorer Hiram Bingham wrote about the site in National Geographic magazine and refocused international attention on the ruins. Eitan Abramovich/AFP/Getty Images hide caption

After nearly 100 years, a collection of antiquities from the Inca site of Machu Picchu is going home. The artifacts have been at the center of a long and bitter custody battle between the government of Peru and Yale University. 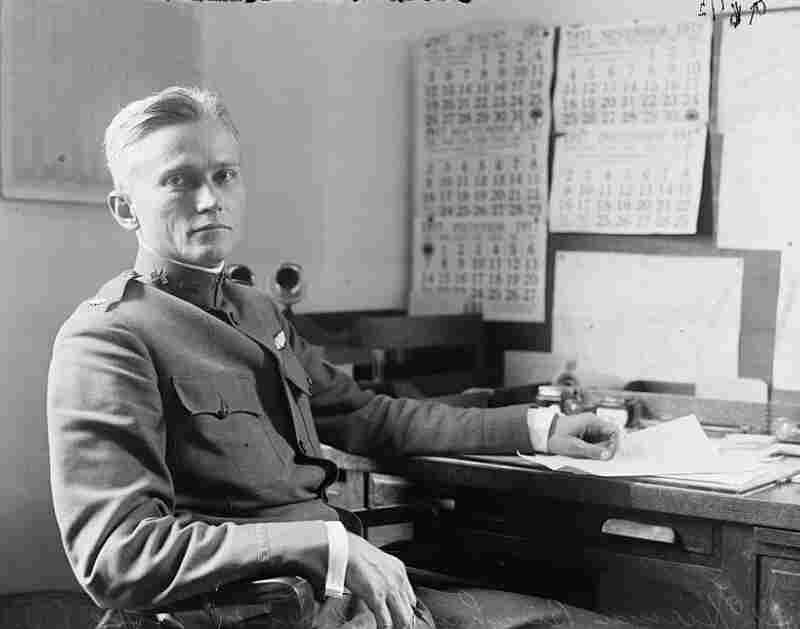 Hiram Bingham III excavated thousands of artifacts from Machu Picchu during multiple expeditions to the Inca site in the 1910s. He is pictured above in 1917. Harris & Ewing Collection, Library of Congress hide caption 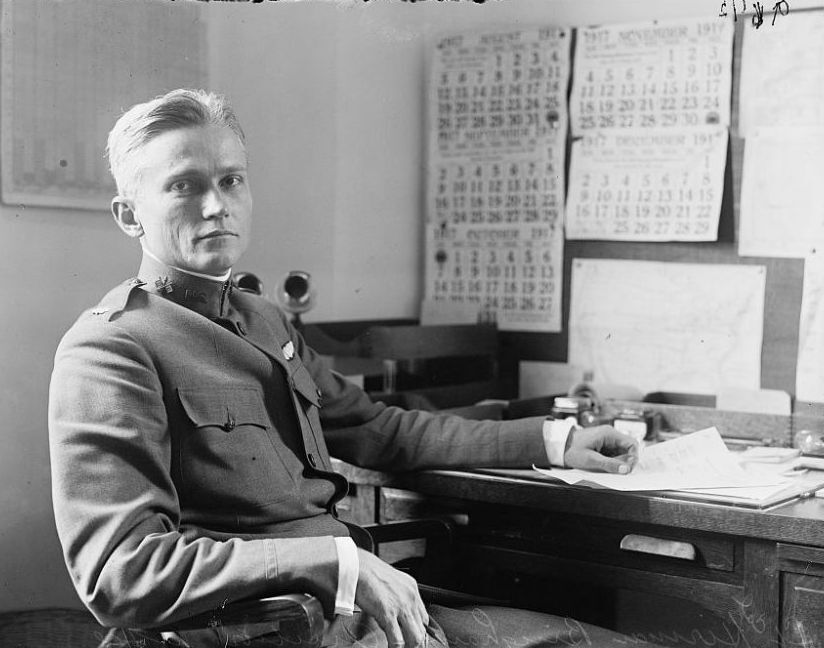 Hiram Bingham III excavated thousands of artifacts from Machu Picchu during multiple expeditions to the Inca site in the 1910s. He is pictured above in 1917.

It started back in 1911, when Yale explorer Hiram Bingham III set up his base camp in Ollantaytambo, a town high in Peru's Andes mountains. From there, he set out to explore the ancient stone ruins of Machu Picchu.  Bingham introduced the site to the world through his articles for National Geographic magazine. He returned twice and excavated thousands of artifacts: ceramics, tools, jewelry and human bones -- all with the consent of the Peruvian government.

"Nearly a century ago, Peru set out to establish a new way of studying its artifacts and a new way of letting its artifacts move through the world," explains Christopher Heaney, author of Cradle of Gold, a book about the life of Hiram Bingham. Heaney says that as early as 1911, Peruvians were anxious to protect their cultural patrimony from looting. They passed a law forbidding artifacts from leaving the country.

"In 1912, when Bingham came back, Peru offered Bingham a resolution under which the artifacts could leave to be studied by Yale," Heaney explains. "It was a recognition of Yale's scientific commitment. But the artifacts would leave on just one condition: that they could be sent back whenever Peru asked."

Some artifacts were returned, but most remained at Yale's Peabody Museum. The university said the artifacts had been sent to New Haven to be studied permanently. Yale claimed title to the collection and insisted that under the laws of the day, finders of antiquities were allowed to keep them -- despite written correspondence in which Bingham acknowledged an obligation to return the objects. 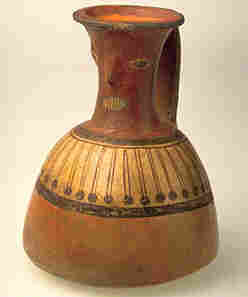 A small aryballos -- a pottery form generally used to carry oils or perfumes -- is one of the artifacts Yale University is returning to Peru. Peabody Museum, New Haven hide caption

Peruvian demands escalated about eight years ago, and in 2008, Peru sued in U.S. federal court. Yale countered with a motion to dismiss the case, saying the country had lost its right to the materials by waiting too long to ask for them back.

Things really heated up in November, when Peru launched an aggressive media campaign. Peruvian President Alan Garcia led thousands of protesters through the streets of Lima demanding Yale send back the collection.

Garcia asked President Obama to help resolve the standoff. Peruvians even traveled to the Vatican and asked the pope to intercede. Finally, Yale's President Richard Levin stepped in and sent a delegation to Lima to reopen talks with the Garcia administration. Yale anthropology professor Richard Burger oversees the Machu Picchu collection and was on the negotiating team. He says reaching an agreement served everyone's interest.

"The presidency of Alan Garcia is coming to an end and I think he'd like to resolve this before he leaves office," Burger says. "And I also think the two sides realized that even though there are legal proceedings, that those proceedings probably won't satisfy either side no matter what ruling the judge gives."

Within days, the two sides signed a memorandum of understanding, or MOU. Peruvian Foreign Minister Jose Garcia Belaunde says the leadership and direct intervention by Yale's president was crucial. 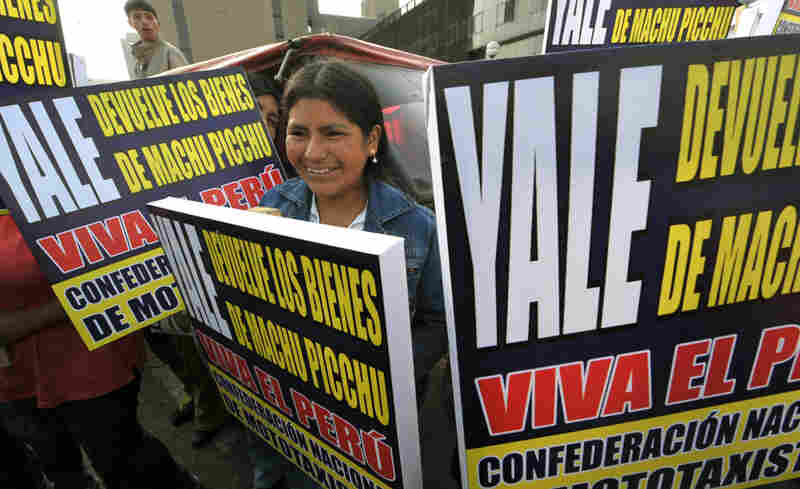 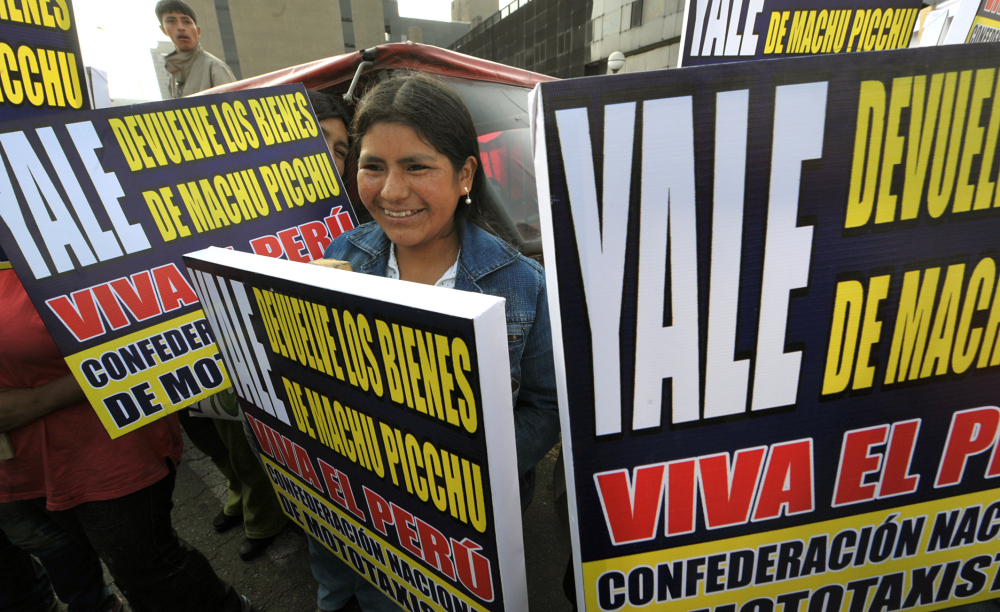 The MOU is governed by Peruvian law, not by the laws of Connecticut. It removes a provision that Yale had initially insisted on -- giving the school the right to hold on to the artifacts for an another 99 years. Now, all of the objects will go to a university in the city of Cuzco, the former capital of the Incas. Ultimately, Peru will build a museum and research center where scholars from around the world can study the collection.

Connecticut Sen. Christopher Dodd helped mediate the conflict and says that the solution could serve as a model for future disputes. "Going back to the university in Cuzco, establishing a joint relationship, acknowledging Yale's treatment of these artifacts over the last 100 years: I think sets a precedent that will allow for other such collections to be able to be moved and to be preserved and to be celebrated in ways that people haven't thought of in the past."

But Yale's Burger cautions that this should not be used as a model for future antiquities disputes. He says the case is unique, because Machu Picchu is so closely tied to Peru's sense of national identity. It's also a major tourist destination. 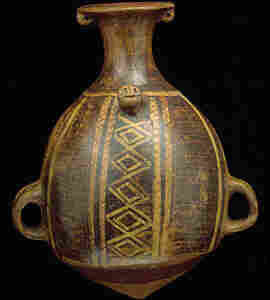 A bottle found at Machu Picchu is among the artifacts being returned. The objects will go to a university in the city of Cuzco. Peabody Museum, New Haven hide caption

"Machu Picchu really has become almost synonymous with Peru," Burger says. "So we don't want to see this as a general precedent, but certainly you can understand that if hundreds of thousands, almost a million people are visiting Machu Picchu a year -- if our goal is to share the knowledge that we have and share the objects, this is much more effectively done in Cuzco than it is in New Haven."

The collection will be allowed to leave Peru for exhibitions and research, but only for two years at a time. Writer Heaney believes that idea harkens back to Peru's original vision for the cooperative study of its cultural patrimony.

"It's commonplace today to see rotating collections, but when Peru did this in 1912, I think it was fairly unprecedented. And what we're seeing today is just the completion of a very innovative way of treating artifacts as objects that could circulate on these scientific odysseys, educating people before coming back home."

The artifacts will return in several shipments over the next two years. Museum-quality pieces will be back in Peru in time for 2011's celebrations, commemorating the 100th anniversary of Hiram Bingham's first trip to Machu Picchu.