Accessibility links
From Steel To Tech, Pittsburgh Transforms Itself Some people still call it the Steel City, but the soot from a bygone era is gone. It's been replaced by efforts to transform the city into a high-tech center. And with an unemployment rate that's lower than the national average and 1,600 technology companies, the city is well on its way. 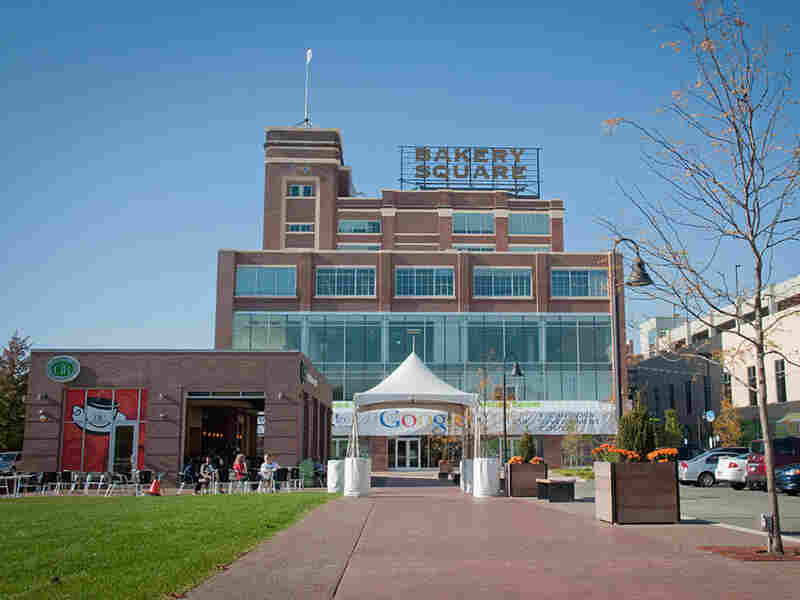 Google and other high-tech companies have set up shop in Pittsburgh's Bakery Square, which used to be a Nabisco factory. Courtesy of Erika Michael Gatz hide caption 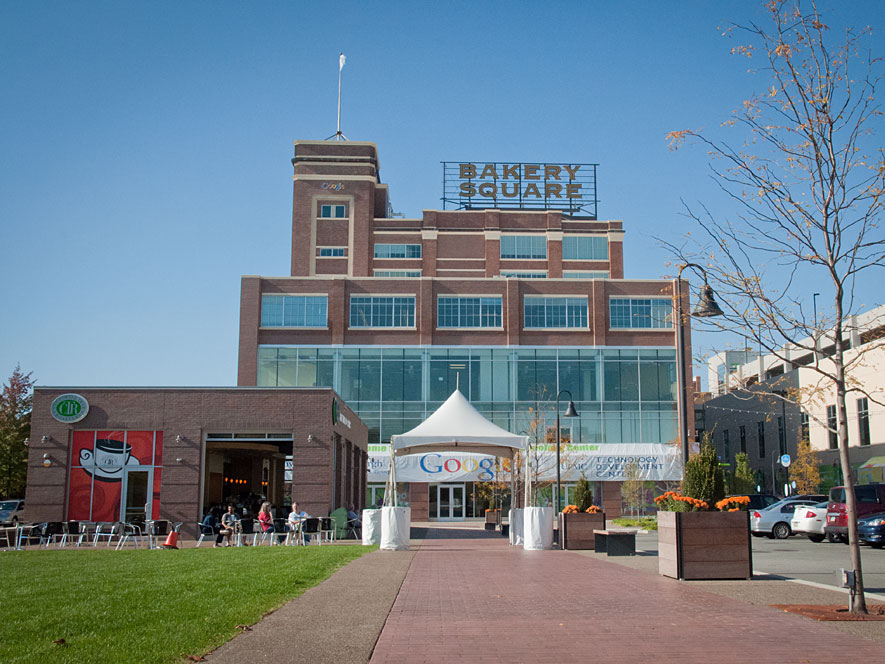 Google and other high-tech companies have set up shop in Pittsburgh's Bakery Square, which used to be a Nabisco factory.

But with an unemployment rate nearly 2 percentage points lower than the national average, 1,600 technology companies and a growing population -- the city has largely moved on from its industrial roots.

Still, during the early postwar years, it produced half the country's steel and a lot of its soot.

"It was so bad that you had to have the streetlights turned on at noon for a number of days during the winter and fall," says Joel Tarr, a history professor at Carnegie Mellon University.

That was no way to live, and the city's future was as murky as the pollution gripping it. But in this period, a surprising coalition called the Allegheny Conference on Community Development formed to clean things up. Leaders from business, universities, nonprofits and government joined together to create smog controls and clean-water rules.

Even so, when Steve Lee came to Pittsburgh in the early 1970s to attend Carnegie Mellon, steel production was still taking a toll.

"And I'd come to school at the end of summer vacation, and for two weeks my eyes would run," he says. "I'd have a sore throat from all the junk that was in the air."

Lee eventually became enamored with the city. Today, he's the head of the Carnegie Mellon School of Architecture, where he was once a student. And he remembers those late nights studying in the 1970s, when he would look out his window.

"The sky was just throbbing and red as the open-hearth furnaces were being stoked," Lee recalls. "And this is an amazing place. But I was very young. I didn't realize we were at a moment of huge transformation."

End Of An Era

By the early 1980s, the steel era came to an abrupt end. This was not some long, drawn-out decline like the auto industry. Virtually overnight, 150,000 manufacturing jobs were wiped out. Many blame deregulation and foreign competition.

"I never have ever bad-mouthed U.S. Steel," says Colin Meneely, one of the steel workers who was forced to reinvent himself. "They paid me for every minute I worked."

Still, Meneely says he's aware that a lot of people think they weren't treated right. "Well, suck it up and move on," he says. "It's what you have to do."

Meneely went to college and law school in his 40s. Education played a role in Pittsburgh's reinvention, too.

Carnegie Mellon and the University of Pittsburgh became powerhouses in computing, robotics and biotechnology. Companies were spun off, and these sectors started replacing steel.

A former mill on the river is now a bustling technology park. That's because in recent years the universities, in coordination with nonprofit developers and community groups, have helped support these kind of projects.

Not everyone has benefited from Pittsburgh's turnaround. There are still poor neighborhoods and racial divisions. But it's a long way from the general despair of the 1980s. Today, no one industry dominates Pittsburgh's economy. 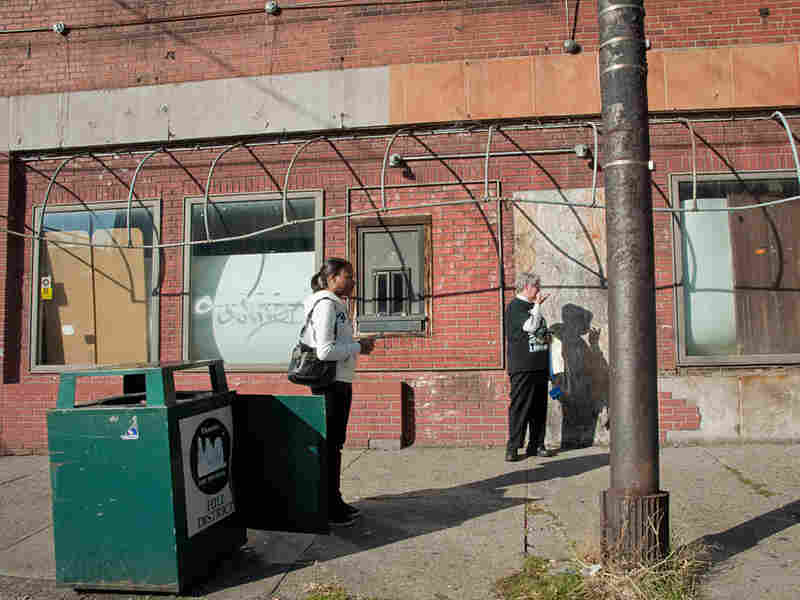 There are parts of Pittsburgh that have yet to be revitalized, including the area near a bus stop in the Hill District. Courtesy of Erika Michael Gatz hide caption 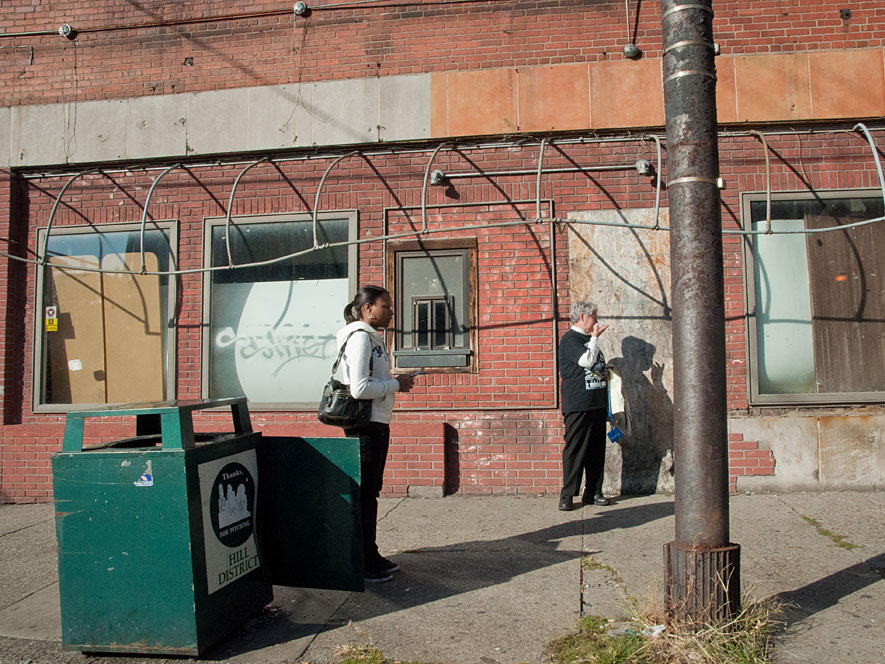 There are parts of Pittsburgh that have yet to be revitalized, including the area near a bus stop in the Hill District.

Robb Myer came to Pittsburgh from San Francisco to attend the Tepper School of Business at Carnegie Mellon. After graduation, he stayed in the city to start NoWait, a technology company that helps restaurants engage their customers. NoWait created an app that restaurants use to manage a waiting list if they don't take reservations. Patrons provide their mobile phone numbers and then receive text messages when a table is ready.

"I kind of started liking Pittsburgh," Myer says. "It has a small-town feel, but it's kind of a big city, and I thought it was actually a really good place to start a technology business."

This transformation is still very new. But there's a strong, proactive movement in place.

Pittsburgh is a city that doesn't wait for things to happen anymore. And that's why other cities that are trying to emerge from their industrial pasts now look to Pittsburgh with envy.

The story was produced by Changing Gears, a collaboration of WBEZ Chicago, Michigan Radio, and ideastream Cleveland.