Accessibility links
App-etizing: Cookbooks And Recipes Go Mobile These days, more and more home chefs are using their laptops and iPhones to find recipes -- and they are using traditional cookbooks less and less. Lynn Neary reports on the cooking app craze and how it will affect the future of food publishing. 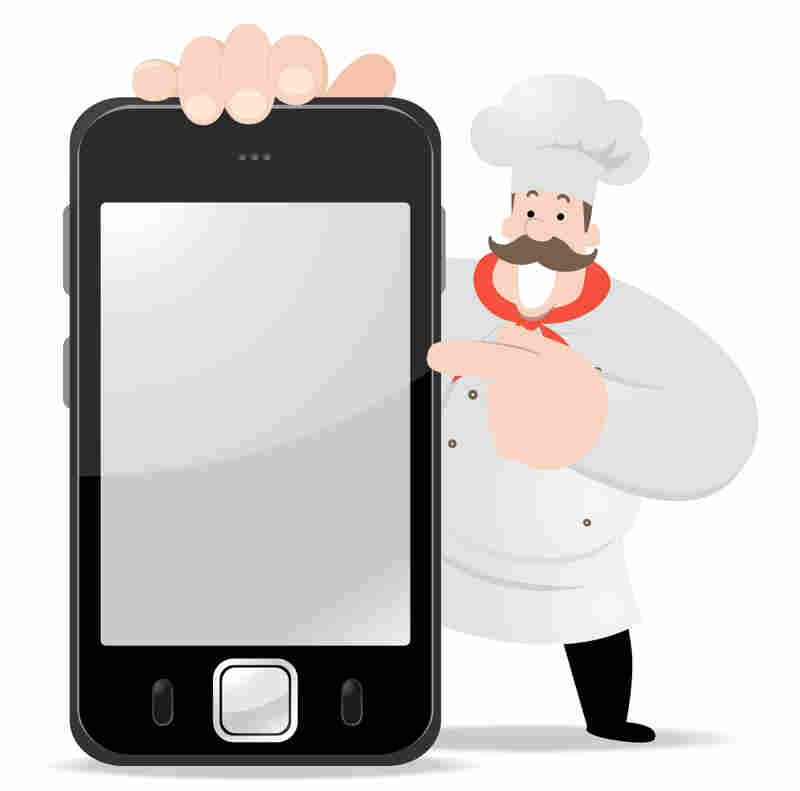 If there's one kind of book that you'd think might be safe from the digital revolution it's the cookbook.

It's hard to imagine how the Web could replicate a cookbook's well-organized recipes or enticing illustrations -- and, of course, a book doesn't freeze or short out after a cooking accident. And cookbooks make the perfect gift for the foodie on anyone's list, which is why they're a mainstay of publishing at this time of year.

But though the traditional cookbook is alive and well, a number of tech-savvy cooks believe that e-books and iPad apps are a boon for the industry -- and could provide cooks with more creative and convenient ways to find the right recipes.

E-Books, Apps And The Joy Of Cooking

A couple of years ago, Will Schwalbe left a perfectly good job in traditional publishing to start cookstr.com, a website that lists recipes from well-known cooks and well-loved cookbooks. But even though he's gone over to the digital side, Schwalbe doesn't think that the traditional cookbook is in any danger. He likes to tell one particular story, about visiting a friend with a house in the country.

How To Cook Everything
Nigella Quick Collection
Cookstr

"He had ordered I would say easily four or five hundred dollars' worth of cookbooks online and had them sent to his beautiful country house," he says. "And when it was time to cook something for dinner, he said, 'Let me go online and get a recipe.' "

"It wasn't one as opposed to the other," Schwalbe explains. "He loved the cookbooks -- he read them, he searched them for inspiration. But when he needed to find a specific recipe, that's when he went online."

In fact, cooks and cookbook lovers have a lot of choices these days when they want to search for a recipe. Jessica Goodman, an associate publisher at John Wiley & Sons, says the digital options just keep growing.

He loved the cookbooks — he read them, he searched them for inspiration. But when he needed to find a specific recipe, that's when he went online.

Apps that can be used with smart phones and tablet devices like the iPad are the newest entry to the field. Their popularity is growing, says Goodman, because cookbooks, like Wiley's best-selling How to Cook Everything by Mark Bittman, aren't easy to lug around.

"It's big book," Goodman says. "It's about 5 pounds, and over a thousand pages. But I imagine that the typical consumer would love to have this cookbook with them at all times -- so we imagined a How to Cook Everything mobile app on the go."

Well-known chef and Morning Edition regular Nigella Lawson has her own app. It's called Nigella Quick Collection -- and Lawson suspects that it's best used outside the kitchen.

"People are very busy," she says. "They're maybe on the bus thinking, 'What am I going to have for dinner tonight? I've got to go to a shop and get it.' [The app is there] to help you shop."

"What it's least useful for is in the kitchen," she adds. "You don't want a phone or any similar device right where you are spluttering with the pan." 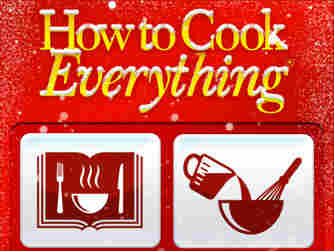 Mark Bittman's How to Cook Everything application from Culinate has been a huge success. hide caption

Don't tell that to Gwynne Kostin, a working mother who cooks most nights for her husband and two teenage sons. Her kitchen doesn’t have granite countertops or stainless steel appliances. In fact, Kostin doesn't even have a dishwasher -- but she does have an iPad.

"I can just go through and there are all these crazy applications that you can download," she explains as she deftly navigates her small kitchen, preparing for dinner. "The one I am using today is called Epicurious."

Kostin began cooking with what was once considered a sort of cook's bible: The Joy of Cooking. From books she moved to magazines. Then she began searching websites and printing out recipes she found online. Once she got a wireless connection, she brought her laptop into the kitchen with her. When apps became available, Kostin was naturally an early adopter, downloading them first to her smart phone and then to her iPad.

As you can see I'm getting smoky paprika all over my hands because I have to handle the chicken, and when you have to go and touch the application it can get goopy.

Gwynne Kostin on the downside to cooking apps

"It allows you to search for things based on the ingredients," she says. "So this way I can find new recipes, which is how I found the recipe I'm cooking today."

Kostin  doesn't like to cook the same thing over and over again, so she is always looking for new recipes. She uses apps on her iPhone to shop and get ideas, then switches over to the iPad for cooking. She still has a couple of her favorite cookbooks sitting atop her refrigerator but, she says, "Primarily I'm using apps."

Kostin may preach the merits of apps with the zeal of a convert, but even she acknowledges there's one obvious drawback.

"This is one of the downsides of the apps," she sighs, midway through cooking her meal. "As you can see I'm getting smoky paprika all over my hands because I have to handle the chicken, and when you have to go and touch the application it can get goopy."

The solution, says Kostin? Lots of paper towels and hand-washing. 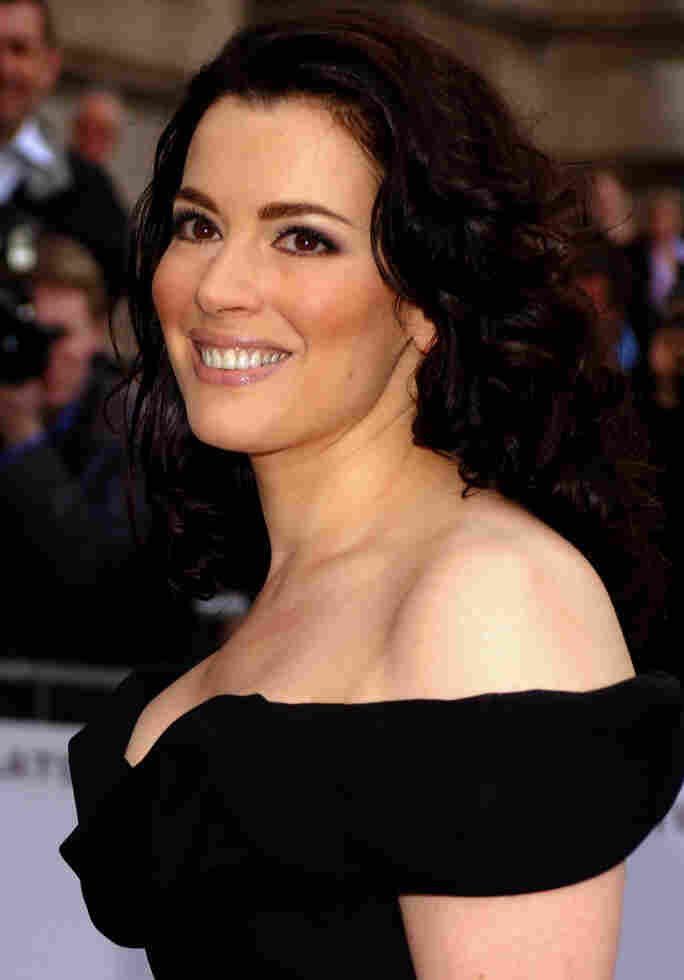 Too Many Apps Spoil The Broth

There's no question that more and more people are using mobile devices to access the Internet, says Schwalbe -- the app is likely to be a big part of the cookbook's future. But he says dirty hands aren't the only problem that comes with using apps.

"I think there's an inherent flaw in thousands or tens of thousands of individual cookbooks as apps," he says. "And the flaw is that the more you have the harder it is to use them."

OK, so maybe 1,000 apps is more than anyone is ever going to want. But according to Schwalbe, even five or six separate apps could pose a problem.

"So say for example ... you want to search for a kid-friendly recipe, or one-pot meal, or something that's gluten-free or for your vegan aunt," he says. "And as it's set up now, you would probably need to search each app individually, according to whatever criteria that app had. And in fact, most of the recipes in those apps wouldn't have been tagged with any of those terms."

What Schwalbe envisions for the future is similar to cookstr.com. He calls the website a collective, where chefs and publishers allow their work to be used in return for a share in the revenue. The site features recipes from some 400 chefs, including Julia Child, James Beard, Mario Batali and Jamie Oliver. Schwalbe thinks a similar arrangement could be made to develop a "super app."

"So when you want to browse, you might go to your physical bookshelf or your individual apps," he says. "But when you really want to find something ... [the super app] will enable you to search powerfully."

Whatever else the future may bring, the traditional cookbook is still likely to be part of it -- cooking, after all, is about so much more than just finding the right recipe.