Accessibility links
Melissa Leo: Discovering The 'Fighter' In Alice Ward Melissa Leo isn't that much older than actors Mark Wahlberg and Christian Bale. But the acclaimed character actress plays their mother in David O. Russell's boxing drama The Fighter. She discusses her role, which recently earned her the New York Critics Circle Award. 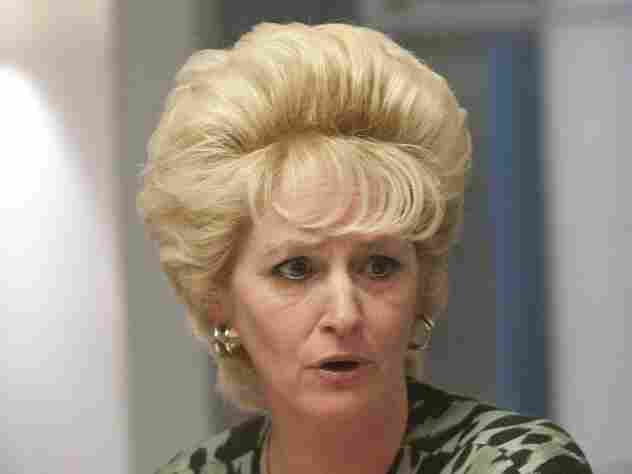 The actress, a critical favorite known for disappearing completely into her roles, looks nothing like Alice — a gruff, bleach-blond Massachusetts native who tosses four-letter words around with ease and manages her sons' boxing careers like a stage mother on steroids.

And before taking the role, Leo tells Terry Gross, she had one pointed question for Russell.

The Fighter's Good, But Enough To Be A Contender?

"I said, 'Aren't I too young to play Mark and Christian's mother?'" she laughs, confessing that she was nervous portraying an older character. (Leo is roughly a decade older than the actors who play her sons.)

"But at some point, I noticed that my apprehension had vanished, and I plowed on ahead and believed myself to be their parent," she says. "That's probably the biggest secret of acting: If the actor believes it themselves, they can make you believe it."

"Having walked in Alice's shoes, she's actually a very gentle and loving lady. But she saw an opportunity for her boys, and rose above whatever she felt she might be inside of herself and made careers for the two of them. Now, the fight game is an ugly game, and I don't mean what happens in the ring. The management and the horror stories of fighters being duped by their own management, stolen from, put in life-threatening situations by their own people — it's just an extraordinarily nasty game. And I think if Alice has a bit of rough about her, it's something she had to learn."

On the similarities between boxing and acting

"There's all the upside of being an actor, and it's a wonderful life, and I wouldn't trade it for anything — but when all is said and done and everyone has offered their suggestions, it is the actor — or the boxer — who goes into it on their own. Perhaps that parallel [endears] the boxer to me. They're also a bunch of good-looking guys, gnarly and bashed up."

On how Wahlberg and Bale approach acting

"They're very, very different actors in every sense of the word. Christian goes, in a very Method-type way, into his character. I met him the day he was meeting Dick Eklund for the first time, and watched him morphing into this other man who he plays in the film. Mark comes with four years of [boxing] training and getting his body in the right shape, and his boxing abilities in the right shape, to be able to really sell the fighting in the movie. ... But it doesn't come with a set of ideas about how the scene might play: 'Because I am this person, this is how I might do this,' is the kind of question Christian might ask himself going into it. (Now, that's an assumption on my part.) Then Mark shows up, and on a dime can offer you [variations on] the same moment in the film with laughter, with fear, with hatred, with regret, with anything that David Russell asks in a single take — and Mark delivers."