Accessibility links
Foreign Policy: How To Talk About Afghanistan President Obama will give a speech tomorrow on the review that his administration has conducted of the war in Afghanistan. Peter Feaver of Foreign Policy points out that the president has spoken to the American public about the wars very little. Feaver argues that the president has kept quiet about them so as not to disturb those who agree with him the most when it comes to national security: the Republicans. 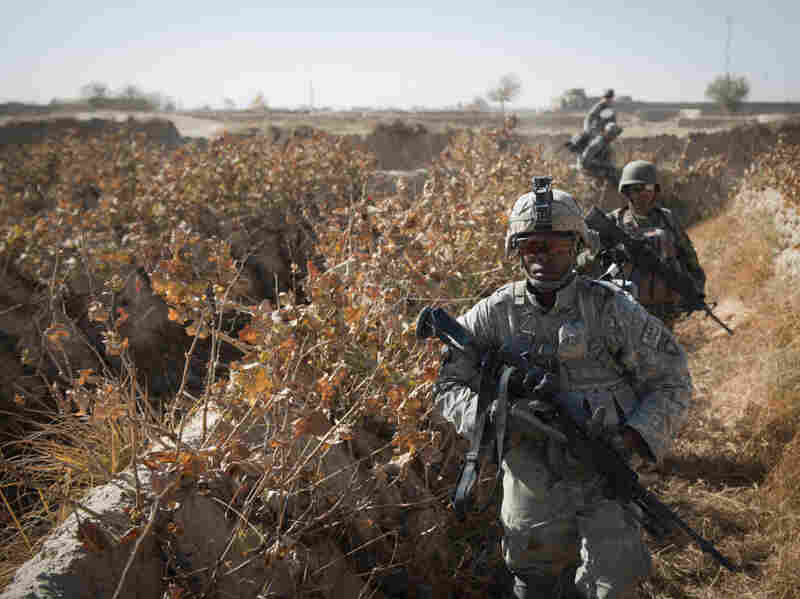 President Barack Obama makes a surprise holiday visit to Bagram Air Base in Afghanistan. The president will give remarks on the war in Afghanistan tomorrow. Jim Watson/AFP/Getty Images hide caption 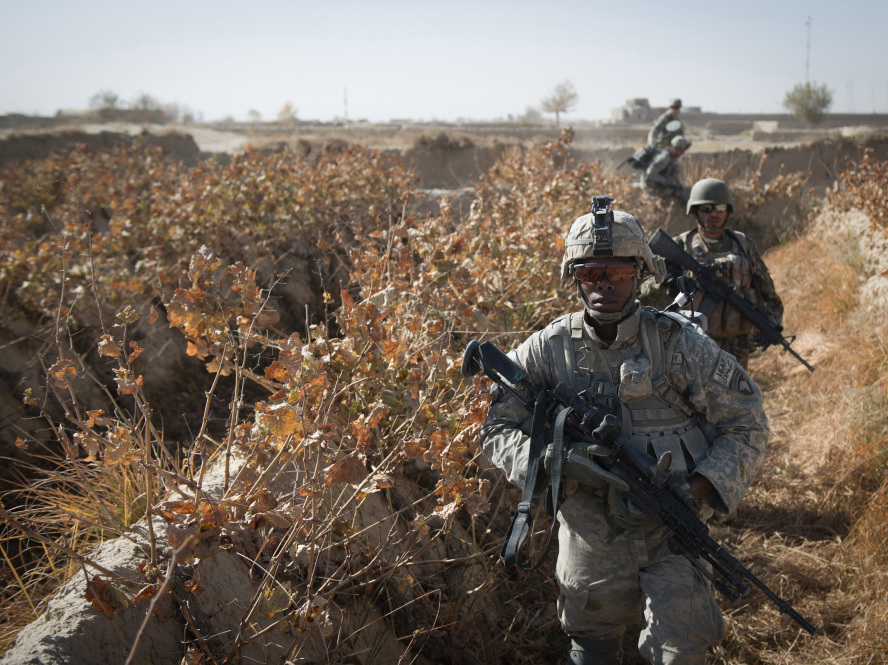 President Barack Obama makes a surprise holiday visit to Bagram Air Base in Afghanistan. The president will give remarks on the war in Afghanistan tomorrow.

Peter D. Feaver is the director of the Triangle Institute for Security Studies and the Duke Program in American Grand Strategy. He was special advisor for strategic planning and institutional reform on the National Security Council staff at the White House from 2005-2007.

On Thursday, President Obama will do something unusual. He will talk to Americans about one of the wars he is leading, in this case Afghanistan. He will give remarks announcing the results of his latest Afghan strategy review which, by my count is the fourth such review in his two year tenure, almost as many reviews second-guessing the policy as major speeches explaining it.

He will announce that his strategy doesn't require radical change because it is making progress. He will also surely declare that we are on track to begin the troop withdrawal timeline scheduled for next summer. And then, if the past is any guide, he will stop talking about the war.

Candidate Obama rose to prominence in part because of how he talked about the wars in Iraq and Afghanistan. It was a paradox. Despite having the least national security qualifications, he enjoyed the best national security platform for a Democrat: Unlike his chief rivals, he had opposed the Iraq war from the outset and he outbid them elsewhere by promising the most hawkish policy in Afghanistan, Pakistan, and the broader war in terror.

He touted this winning platform at every opportunity, wrapped in a scorched-earth critique of President Bush's war leadership.

In fact, as a candidate, he seemed to talk about the wars almost as much as President Bush did. Just as President Bush defined himself as a wartime leader and saw his most important role as commander-in-chief to the troops and explainer-in-chief to the public, candidate Obama defined himself as the anti-Bush who would lead the troops away from the bad war in Iraq and into the good war in Afghanistan.

As president, Obama has kept up the campaign critique of his predecessor even as he has kept most of the war-related policies that President Bush pursued in his second term. Across the board from the legal framework for the broader war on terror, to the phased Status of Forces Agreement -- dictated withdrawal from Iraq, to the surge in Afghanistan President Obama has largely followed the trajectory President Bush's strategies anticipated.

Where Obama has diverged from the Bush trajectory, it has almost always been in the same direction, towards reducing the wars' footprint on Obama's governing agenda. He has followed Bush's Iraq policy, but at a hands-off distance. He delegated Iraq policy down to the vice president and limited the administration's involvement in helping Iraqi political leaders deal with their post-election paralysis. He authorized the surge in Afghanistan that Bush's 2008 strategy review recommended, but he imposed an artificial withdrawal timeline and tried to convince his base that the timeline meant the war would be ended rapidly, regardless of progress in the battle or other facts on the ground.

Most noticeably, President Obama has dramatically reduced the prominence of the wars in the administration's rhetoric and, consequently, in the public debate. To be sure, the wars do produce headlines, sometimes because of barely-foiled attempted terrorist attacks, sometimes because internal debates from within Obama's fractious national security team bubble to the surface with dramatic leaks. But in sharp contrast with his predecessor, the administration does not appear to be trying to drive the public narrative on the war. Or rather, the administration's strategy appears to be to drive the public narrative underground.

There is a cold political calculation behind this strategy. Obama has pursued a largely partisan strategy in governing overall, ramming through his most important domestic policy achievements on straight party-line votes. However, his national security policies are only kept afloat by bipartisanship. Indeed, Republicans have been his most stalwart supporters on virtually every war-related issue. Obama's most ardent political supporters are the most fervent opponents of his war policies. Obama's political advisors, who played an unusually large role in setting war policies, evidently have calculated that the less Obama talks about the war, the less this contradiction is exacerbated.

The coming year will put this political calculation to the test. Obama's left flank is increasingly agitated with loose talk about primary challenges, yet he has few opportunities to appease them on domestic policy. Only moderate policies have a chance of passing the Republican House, so anything done on the domestic side will likely further antagonize Obama's left-wing base. They will naturally turn to national security, where Obama enjoys more freedom of action, for compensation.

Come August, the contradictions in White House messaging about the Afghanistan timeline will be unspinnable. Either the timeline will start a rapid rush to the exit as the left base wants or it will be the gradual, conditions-based withdrawal inching towards a distant 2014 deadline (followed by a long-term strategic partnership) that General Petraeus and moderates in the war cabinet have indicated.

If Obama opts for the former, then Republican support for the war will likely quickly diminish. People who supported a war they thought they could win will not want to be caught as the last one supporting a losing effort. If Obama opts for the latter, then any remaining left-leaning props undergirding public support for the Afghanistan war will likely collapse altogether. The timeline straddle bought muted Democratic criticism, but the mutes will be off once the straddle is abandoned.

At that point, President Obama will need to explain to the American people why we are in the war and why additional sacrifice is worth bearing. But at least one significant constituency, his base, will be in no mood to hear him out.

In his review of the midterm "shellacking," Obama admitted to only one mistake: He says he failed to explain to the American people the wisdom of his economic and health care policies, this despite scores of carefully crafted speeches and campaign-style events in a year-long torrent of rhetoric. If public support for his wars collapses, he may conclude again that he failed to explain the wisdom of his policies to the public. Only this time, there will likely be precious few speeches to dissect.