Accessibility links
A Final Lesson On The Meaning Of Christmas (Carols) For 24 years, William Studwell, a retired professor, chose a Christmas "Carol of the Year" to highlight to newspapers, radio newsrooms and TV stations across the country. Though he died in August, Studwell left notes to elucidate his 25th -- and final -- selection, "We Wish You A Merry Christmas." 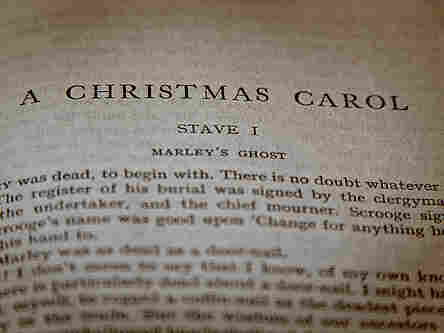 For the past 24 holiday seasons, Christmas music historian William Studwell has trotted out his annual Carol of the Year, which highlights a Christmas carol on an anniversary year.

The Northern Illinois University professor emeritus didn't live long enough to deliver what he planned as his 25th, and final, essay on what he considered the most important holiday songs. But thanks to the work of a few others, his project has been completed.

Every year, just before Thanksgiving, newspapers, radio newsrooms and TV stations around the country would get their annual notification that Studwell had proclaimed the Carol of the Year.

The songs he highlighted ranged from "We Three Kings" to "Jingle Bells." And his comments ranged from dispelling a popular rumor about "The Twelve Days of Christmas" to anecdotes about the untimely deaths of both the composer and lyricist of "White Christmas." Studwell said the composer and lyricist "didn't enjoy the money, the financial rewards or the pleasure of knowing they had written a classic."

Northern Illinois University official Joe King helped Studwell get the Carol of the Year message out for the past 14 years.

"Every year, from the time you are a child, you sing these songs, you sing them over and over again and they're the soundtrack of your life, and you don't give them a second thought," says King. "And then you would sit down and talk with Bill and all of a sudden, he would make you see them in a whole different way."

How It All Started

The Carol of the Year started four decades ago, with a handwritten pamphlet describing the story of the song "O Holy Night" that Studwell gave his family members. After that, he was on his way to thousands of hours of research in libraries across the country. And it wasn't unfamiliar territory. His day job was as a library science professor and the university's head cataloger.

Studwell turned his hobby into four books and dozens of journal articles.

He made himself America's go-to-guy for Christmas carols. And Joe King says Studwell loved the spotlight.

This year, King received his envelope full of Studwell's Carol of the Year notes months early. And they were typed -- not the familiar handwriting made hard to decipher by Studwell's long-term neurological disorder. Studwell had dictated them to his daughter Laura from his hospital bed this summer.

"He did all the final edits and revisions," she says. "I took it back to his house, printed it out, stuck it in an envelope and mailed it."

Studwell died the next day.

The Final Carol Of The Year

Christmas is especially difficult for Laura Studwell this year. Not only was her father an expert on the music of the season; he adored Christmas. She says the celebration always started Thanksgiving night, and it was a month-long whirl of decorations, huge parties, songs and presents.

This Christmas Eve, she'll raise a toast to her late parents and play the song that just happens to be this year's Carol of the Year -- "We Wish You a Merry Christmas."

"I know it sounds cheesy," she says, "with this being the 25th year, but I feel like it's what he's saying to me. That he wants me to have a merry Christmas."