Accessibility links
Long Wait May Be Over For Science Guidelines Long-awaited guidelines ordered by President Obama last year to prevent government research from being altered or suppressed for political purposes could be released as early as Friday. During that time, the administration has drawn criticism for its own scientific missteps. 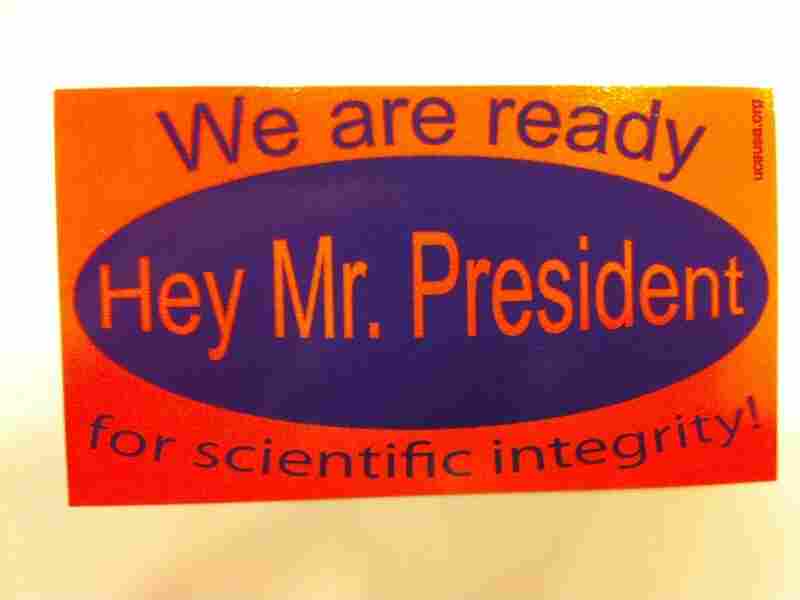 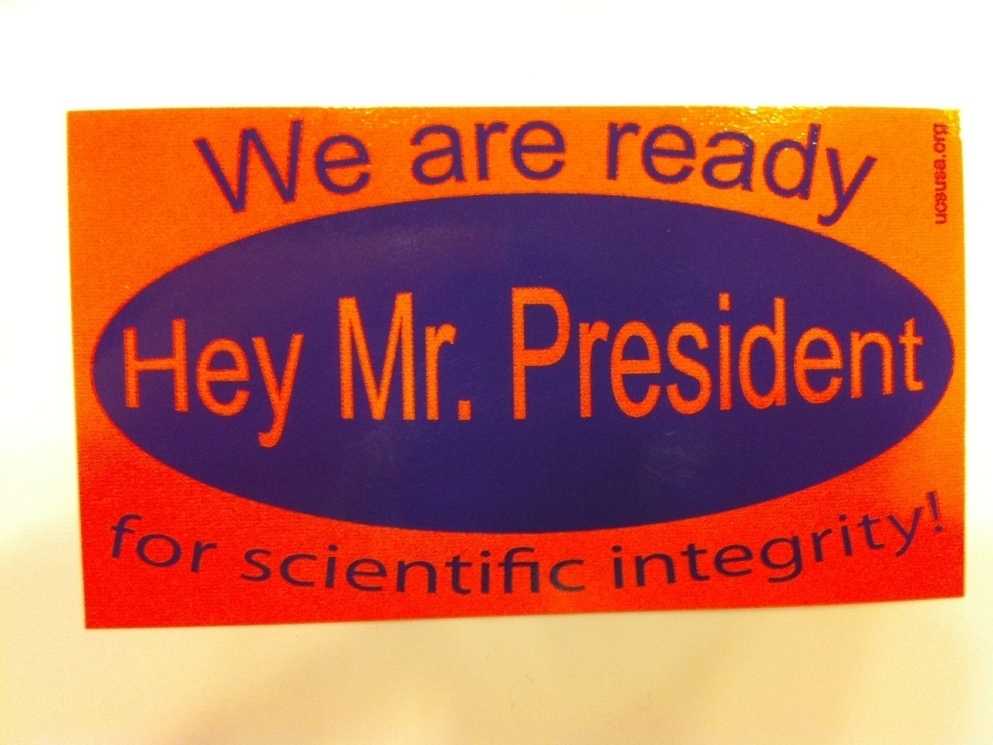 The sticker distributed by the Union of Concerned Scientists in San Francisco this week.

Long-awaited guidelines ordered by President Obama last year to prevent government research from being altered or suppressed for political purposes so the integrity of government scientists can be protected could be released as early as Friday.

The guidelines are nearly 11/2 years overdue. During that time, the administration has drawn criticism for its own scientific missteps.

Obama had been in office less than two months when he ordered his science advisers to draw up the guidelines. He told government researchers gathered in the White House that he wanted to protect their work from political interference.

The guidelines were supposed to be finished in four months. Instead, it's been 21. As in other areas, where the administration has had trouble delivering on its lofty early promises, ardent supporters have been disappointed. Some government scientists have complained they are still being muzzled by midlevel managers.

"In recent weeks and months, there have been complaints and allegations that some of the same practices that people complained about in the Bush administration have not changed in the federal agencies," said Roger Pielke Jr., a professor at the University of Colorado who writes about the intersection of science and public policy. "So I think every day they're not out there, people are looking for them, and want to see that things are different."

Georgia Rep. Paul Broun, the ranking Republican on the science oversight subcommittee, said he's eager to see the recommendations, but "I'm not holding my breath."

Broun complained about the administration's delay in issuing the guidelines, and about some of the scientific pronouncements coming from the White House itself.

"I'm a physician. As a scientist, I'm concerned that we have scientific integrity, that we don't censor scientists, that we have good peer review," Broun said.

He complained that during the Gulf Coast oil spill, the administration stuck with a low-ball estimate of how much oil was leaking from the well, while initially dismissing more accurate forecasts from independent scientists, including those contacted by NPR. Later, White House officials offered an overly optimistic estimate of how much oil had disappeared.

"If these are examples of the Obama administration practicing science-based decision-making, they have a long, long way to go," Ruch said.

His group sued to find out why it has taken so long for the integrity guidelines to be made public.

"Apparently, they've had draft rules that they've been sharing with the Office of Management and Budget and others," Ruch said. "And we're at a loss as to why a policy on transparency has to be developed in secret."

Holdren repeated his promise that the guidelines would be ready by year's end, adding that the process had been more challenging than expected.

"My guess as to one reason why putting these guidelines out has taken so long probably has less to do with anything nefarious going on, but just the sheer complexity of the issue and the realization that you can't simply mandate how science is to be governed through one policy or set of policies," he said.

Still, Pielke said, it's important that the White House finally deliver the promised guidelines to protect public confidence in what scientists have to say.

"If you don't protect that process, you could very easily get to a situation where you have Republican science and Democratic science," he said. "And when you do that, you're throwing away what's most valuable and what's most important about science, which has nothing to do with partisanship but this ability to resolve empirical claims."

Pielke added that given the wide range of agencies covered by the guidelines, many of the details will probably have to be filled in later. He said he expects that when the guidelines are finally released, many people will be asking, "We waited a year and a half for this?"