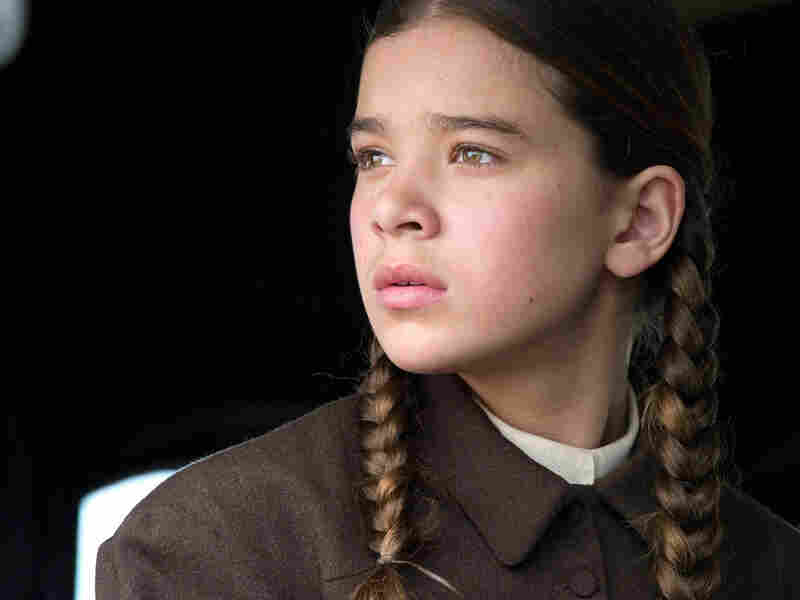 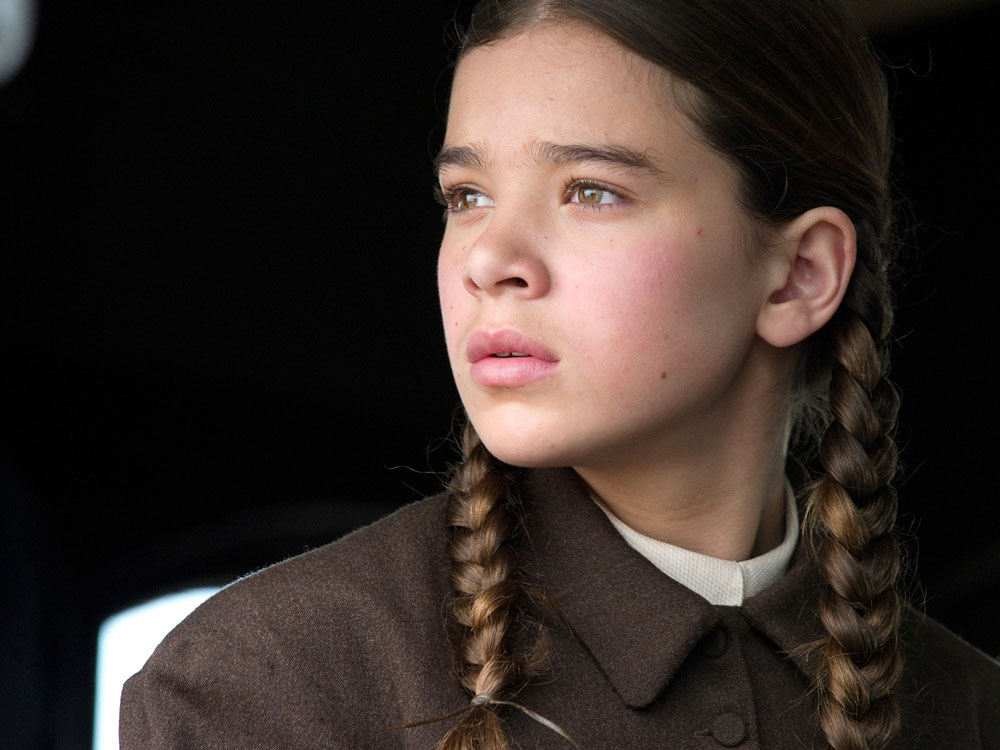 The young actress Hailee Steinfeld plays the fiercely stubborn and very funny Mattie Ross, a 14-year-old out to avenge her father's blood, in the Coen brothers remake of the classic Western True Grit.

And Mattie's got plenty of grit.

"The idea of revenge coming from a 14-year-old girl isn't, you know, exactly right," Steinfeld tells NPR's Melissa Block. "It's more of what she thinks of as doing the right thing. I like to think of it as, her younger brother would wake up in the middle of the night and ask where Dad is, and she just -- she couldn't sit there and watch her mother be completely grief-stricken. She took it upon herself to go out and do what she thinks is right."

Steinfeld says she particularly loved how funny her character could be.

"The stuff that comes out of this girl's mouth is stuff that you would never hear from a 14-year-old girl," she says.

Mattie is smart and well-educated, and her vocabulary is huge -- including words like "braggadocio," which she uses to berate the U.S. marshal played by Jeff Bridges.

"That's what's so great about her," Steinfeld says. "There's so much to this girl. ... She's smart, she's clever, the way she handles her problems. You know, she thinks things through all the way." 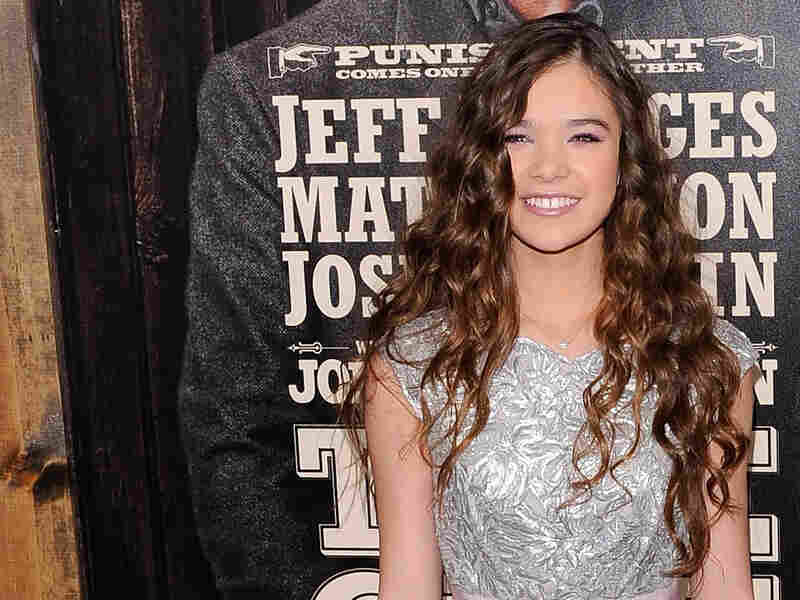 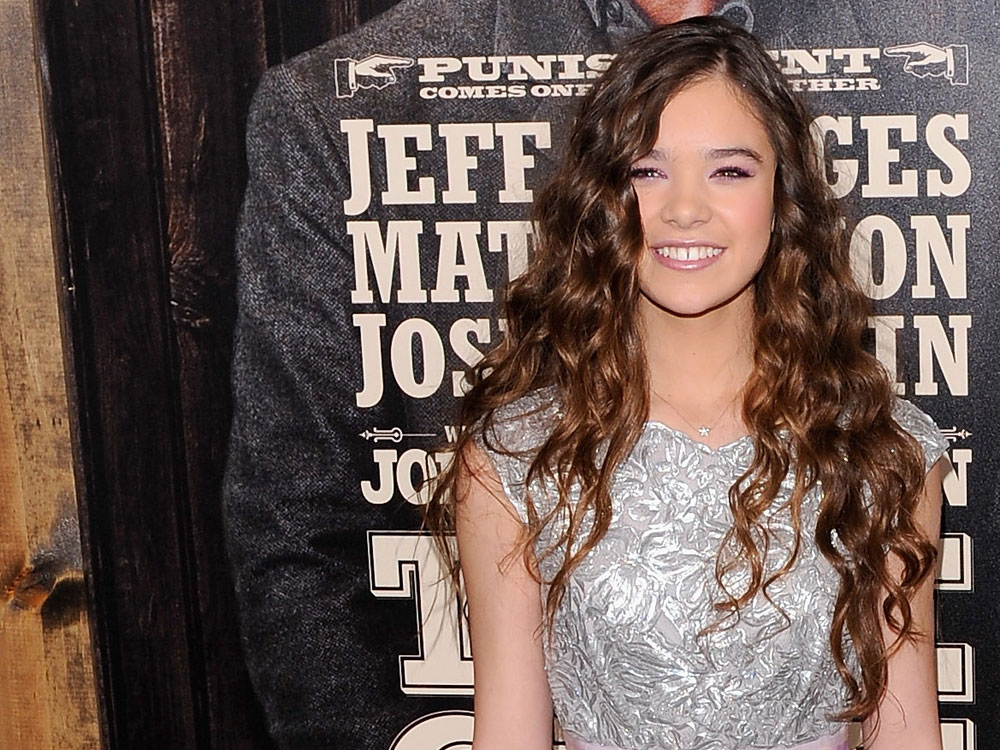 Steinfeld at the film's New York premiere on Dec. 14.

But determination and toughness aren't the only things Mattie has going for her.

"I love the fact that, as much as she comes off as being this tough, witty, gritty girl, which she is, she's still a 14-year-old girl," Steinfeld explains. "She still takes after her mother, who -- you know, the feminine side, but then she's being confronted by these men, and that's where her grit comes out."

In one scene, Mattie wakes up in bed to realize that there's a stranger -- a man played by Matt Damon -- sitting in her room. They start talking, and she tries to figure out who he is. He's a fellow with some ego, and he opens his vest a bit to show off his badge, and says, "That's right. I'm a Texas ranger."

"That scene, I do have to say -- Matt and I could not get through that without laughing," remembers Steinfeld.

Since True Grit is Steinfeld's first feature film, Joel and Ethan Coen were taking a bit of a gamble. For her audition, Steinfeld says, "I went in dressed in character, and [showed] what my vision of this character was. And I really think that's what it was, is my vision kind of clicked with theirs."

For that outfit, she and her mom went to a fabric store.

"She got -- I guess you could call it like a corduroy/burlap kind of material [for the] skirt, and she sewed it together. And I wore boots, and this ruffled up, 1800s-looking shirt from a thrift shop. That was it."

Mattie's signature hat came later. But Steinfeld thinks it's something that really makes the character.

"It's that kind of finishing touch basically. You know, she puts that hat on, and ... she's ready to go."

Steinfeld says the headgear is a connection to Mattie's father.

"She doesn't have anyone out there with her, and at the end of the day her horse is her best friend and her hat is the closest thing she had to her dad," Steinfeld says. "Stuff like that, I think that's interesting to look for."

Remote location shoots in Texas helped get her in the right mindset, too.

"I would go home at the end of the day and I don't know why, but that accent would stay with me," she says. "But you know, I was still myself. I'd go home and text my friends, I'd video chat with my friends, and then I'd go back to set the next day and -- you know, you go through hair and makeup, you go through wardrobe, and it's so amazing. ... I think it just grew on me so much, that I ... it was just like [Mattie's character] naturally became a part of me."