Accessibility links
Deep-Water Sub Dives Into The Fountain Of Youth A 46-year-old research submarine named Alvin will be taken out of service for the next year and a half for modernization after more than 4,600 dives. Among its feats, Alvin found a hydrogen bomb, explored the Titanic and, most recently, visited the seafloor of the Gulf of Mexico. 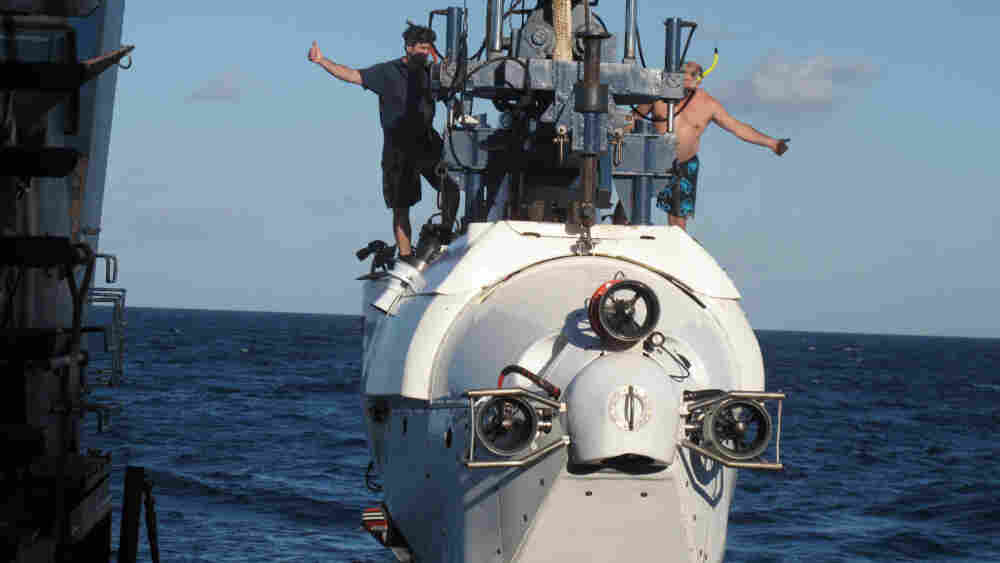 The 46-year-old research submarine, here just before a dive in the Gulf of Mexico in November, has made more than 4,600 ocean trips. Over the next year and a half it will be renovated. Richard Harris/NPR hide caption

A deep-diving submersible named Alvin made one final trip to the ocean floor this week, before being hauled ashore for an extensive, 18-month makeover.

This is proving to be a time of nostalgia and anticipation for the people who have tended the famous sub, lovingly, for many years. 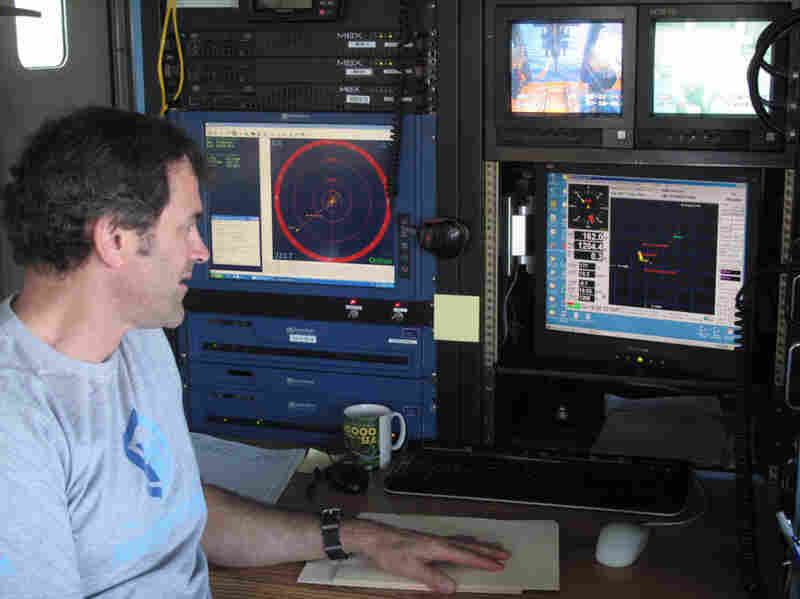 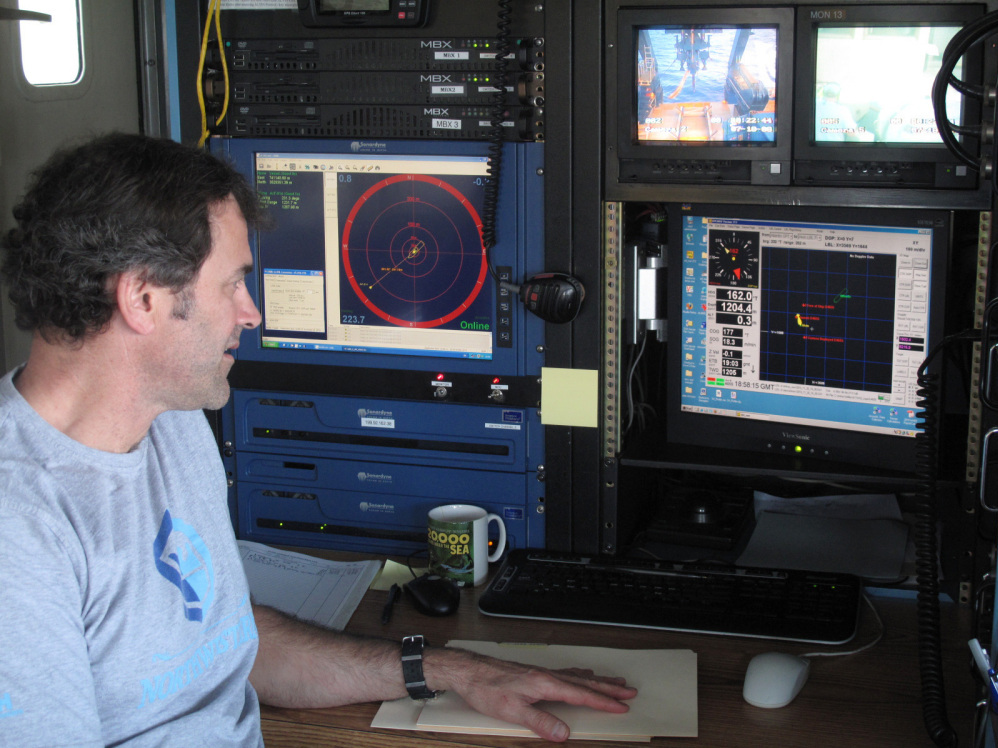 Alvin is in essence a 6-foot-diameter titanium sphere, armed with a battery pack, propellers, a few small windows and life support for the three people who squeeze into it. It carries an armament of cameras, lights and grappling arms.

But to Alvin expedition leader Bruce Strickrott, this red-and-white sub also has quite a personality. "It's almost like it's a little prince that demands the attention of all these underlings," he says. "I just happen to be one of the more senior underlings right now."

On this late-November day, Strickrott is sitting in a chair up on the Alvin's mother ship, the Atlantis, as Alvin pokes around on the floor of the Gulf of Mexico. It's probing damage caused by the Gulf oil spill.

Not Just A Machine

It's almost like it's a little prince that demands the attention of all these underlings.

Pilot Sean Kelley checks in occasionally, over a communication link that pulses sound waves through more than half a mile of ocean water.

Strickrott responds, then leans back and a takes a few minutes to reflect on Alvin's long and versatile career. Based at the Woods Hole Oceanographic Institution on Cape Cod, Alvin has made getting to the bottom of the ocean for scientific research both remarkable and routine. In good weather, the sub can dive every day, and since 1964, it has accumulated well over 4,600 trips to the seafloor. To Strickrott, it's not just a machine.

"Boy, do I have a relationship with Alvin," he says. "Does it have personality? It absolutely does. I dove yesterday and from the moment I got into the water until I got to the bottom, the submarine was testing me to see what I could do."

Among its exploits over the past 46 years: It found a wayward hydrogen bomb that fell into the Mediterranean in 1966. More recently, Alvin poked around the carcass of the Titanic.

"But if you ask scientists about what Alvin is famous for," Strickrott says, "I think the majority would tell you that the sub is famous for finding hydrothermal vents and taking people down there and exposing them to things they just didn't expect to see."

People who ride to the seafloor in the Alvin for the first time are greeted back on deck the mother ship Atlantis with a bath of ice water.  It’s all in fun, of course. NPR's Richard Harris dived on Nov. 28. After about five hours on the seafloor, where temperatures hung around 43 degrees Fahrenheit in the unheated submarine, you might say the topside splash was icing on the cake. But Harris got off lucky — another first-timer on the November trip was doused with 10 gallons of brine, which had been chilled to 20 degrees Fahrenheit, followed by five large buckets of ice water. 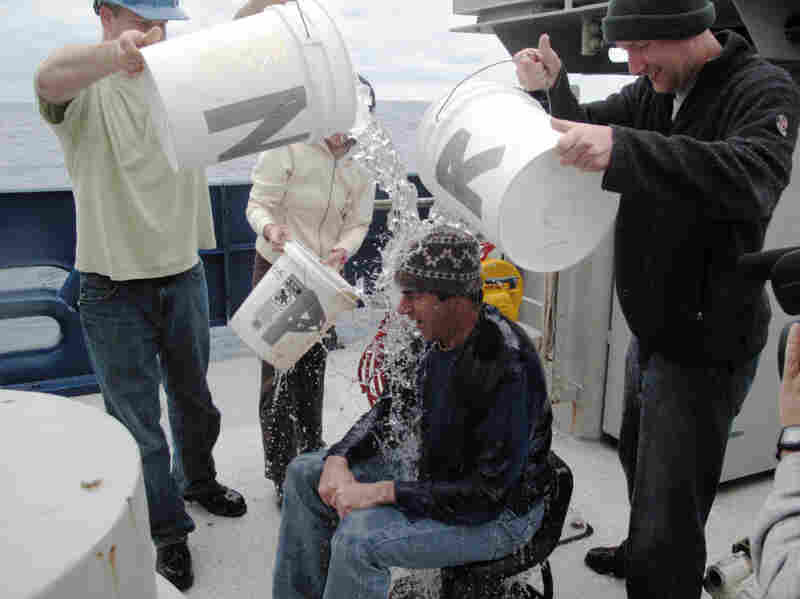 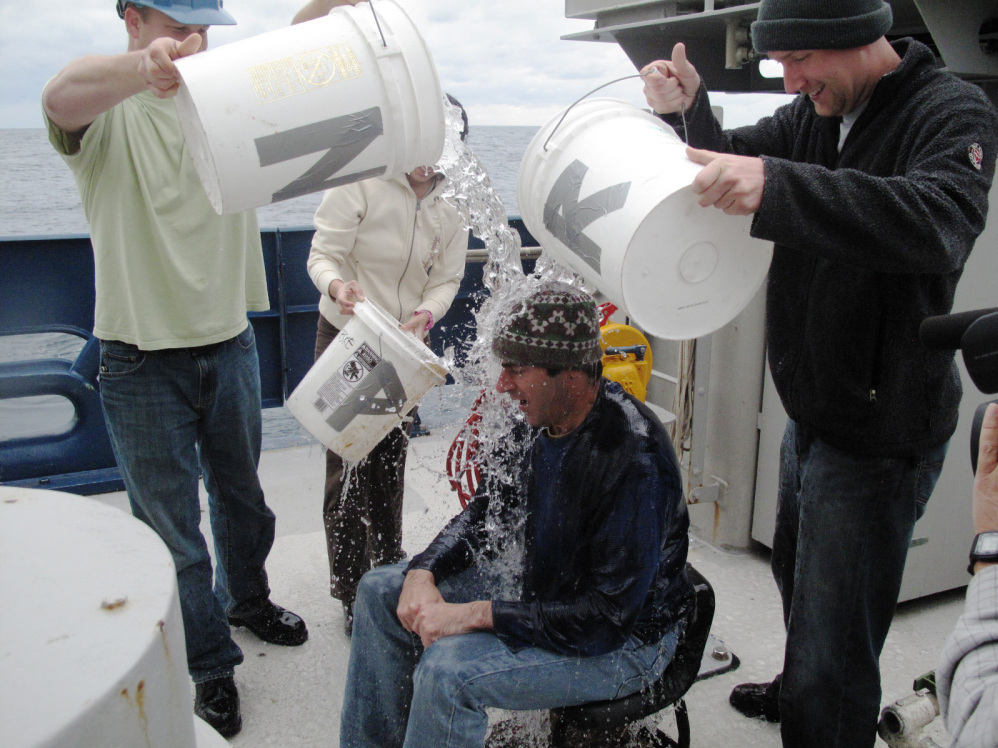 Those vents of hot water from deep under the seafloor feed remarkable and thriving ecosystems far from the light of day.

They are often found in places where molten rock is pushing up from deep inside the Earth. They are visual proof that the world's continents are on the move. That's direct evidence of a central theory of geology, plate tectonics.

'An Elevator For Egos'?

In more recent years, robotic vehicles operating on tethers have been able to perform most of the tasks that Alvin pioneered. That's led to some existential questions about the need for a manned sub.

"Now, there are some people who argue that a submarine is nothing more than an elevator for egos," Strickrott says.

And while there's no denying it's a heady experience to travel to the bottom of the sea, he says there is still something intangible, and valuable, about having people actually there, peering out the windows.

In 2004, a committee at the National Academy of Sciences agreed that manned exploration of the seafloor was worthwhile enough to build a replacement for Alvin. But when the National Science Foundation watched the budget for that project balloon from $23 million to $50 million, they decided to scale back.

Instead, they're taking on the project in steps. Step 1 will include a brand new, 3-inch-thick titanium hull, equipped with more windows, more interior space and updated electronic controls.

"Right now in the submarine, if you want to turn on a light, it looks like Apollo," Strickrott says. "You reach up and you turn a switch and the light goes on."

This video, produced by Tom Lanagan, an engineer with the Alvin program, is a glimpse into life at sea.

Computer touch-screens will take over most of those functions.

Staying the same -- at least for the time being -- will be the batteries and the propellers that allow the pilot to maneuver Alvin. And until the batteries are updated, Alvin will be limited to its current, albeit impressive depth limit of 2.8 miles beneath the waves. That lets Alvin get to about 85 percent of the world's seafloor, Strickrott says.

Once the technical challenges -- and the funding -- are sorted out for new high-performance batteries, Alvin will be able to dive down four miles, expanding the horizon for more human exploration of the abyss.

Reporting From The Bottom Of The Gulf