Accessibility links
States Move Ahead With High-Speed-Rail Projects Wisconsin and Ohio have declined federal funding, to the benefit of California, Florida and other states, which will share that money. California is set to extend its planned rail line. Advocates in Florida say they can do the project without state taxpayers' cash. 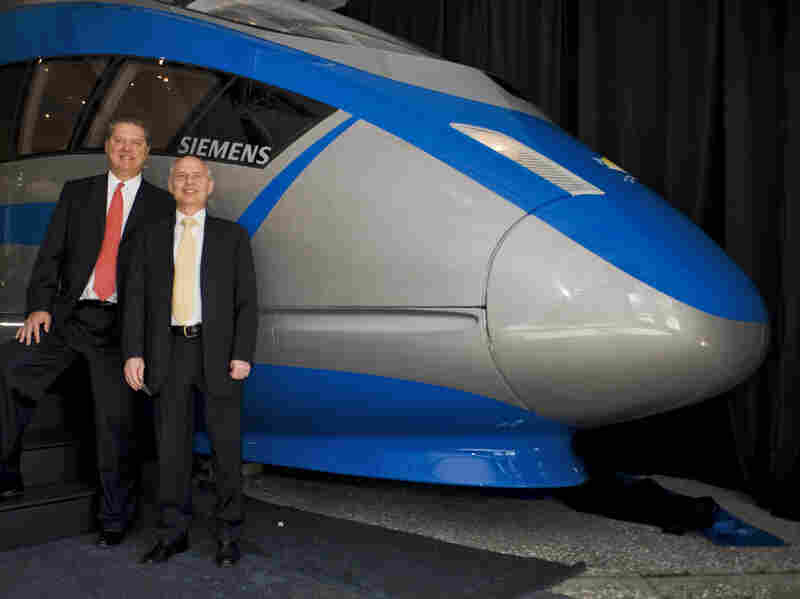 Mock-up of a high-speed-rail train by Siemens, one of the firms in the running for the Florida contract, with Siemens executives Eric Spiegel (left) and Oliver Hauck in Tampa in October. Steve Nesius/AP Images for Siemens hide caption 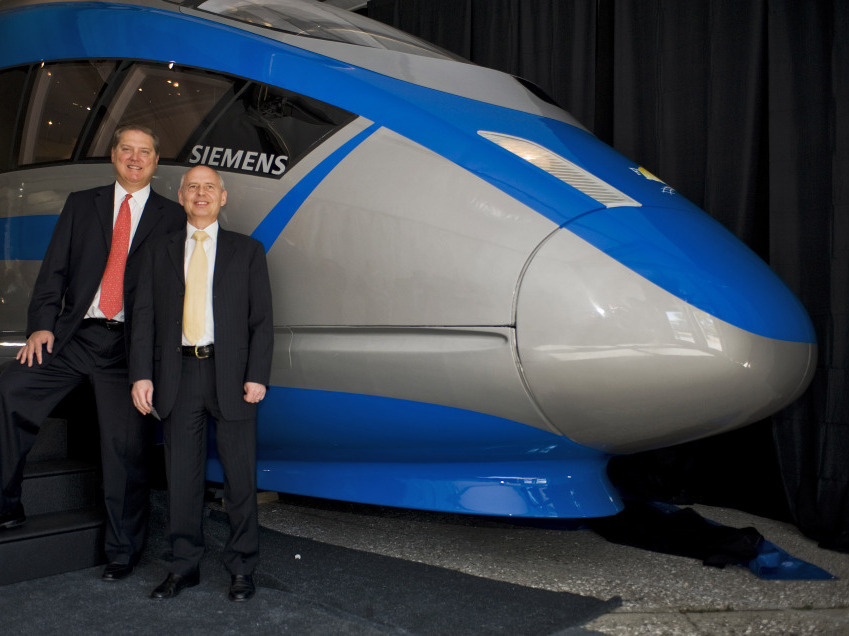 Mock-up of a high-speed-rail train by Siemens, one of the firms in the running for the Florida contract, with Siemens executives Eric Spiegel (left) and Oliver Hauck in Tampa in October.

There have been some political bumps lately for the Obama administration's plan for a national high-speed-rail system. Two incoming Republican governors, John Kasich in Ohio and Scott Walker in Wisconsin, said they would reject their share of federal high-speed-rail money.

U.S. Transportation Secretary Ray LaHood acted quickly to reallocate those funds -- dividing up more than $1 billion among California, Florida and 12 other states.

The president of the U.S. High Speed Rail Association, Andy Kunz, says personally, he wasn't disappointed when Walker and Kasich announced they would forgo the money. "If they thought they were making a statement," he says, "I actually think they helped the national program."

"The sooner we get any system up and running," Kunz says, "they’ll all be going and riding them and saying, 'Aww, these are great. We want one in our state.' "

California's High Speed Rail Authority recently decided, in conjunction with federal officials, where to build its first segment of what will be a 520-mile route.

Roelof van Ark, the authority's CEO, says the first section -- California's Central Valley -- was going to be 65 miles long, but now they can extend that line. "We are able to extend the line down to Bakersfield. That will be a great advantage for us," he says.

That almost doubles the length. Van Ark says the authority hopes to begin construction in 2012.

The extra federal funding will also benefit Florida, if plans for high-speed rail there go forward.

Florida's incoming Republican governor, Rick Scott, has been guarded in his comments on high-speed rail. He says he is leery of cost overruns and wants to be sure Florida's taxpayers aren't left with the bill.

That's has some rail supporters concerned that, like Kasich and Walker, Scott may ultimately reject the $2.4 billion in federal funds. But state Sen. Paula Dockery, who supports high-speed rail, says she's "glad he's taking the cautious position that he's taking."

Dockery is helping advise Scott on the state's rail plan and the discussions going on with international corporations eager to build and operate it.

There are at least seven teams in the running so far, and they include companies such as Mitsubishi, Siemens, Bombardier, Amtrak and France's SNCF -- a veritable who's who of international rail.

Dockery says the companies have been willing to assume much of the risk of unexpected costs, and they bring their own financing to the table. She says the companies will pay what would be the taxpayers' share and cover any cost overruns, operations and maintenance.

She says for Florida, it all adds up to a great deal.

There will also be a "Buy America" provision in the contract that will bring jobs to Florida, and possibly also the facilities that will manufacture and maintain the train cars.

Dockery says she is confident that incoming Gov. Scott will endorse the plan once he sees the details. If he approves, and guidelines go out soon to companies preparing bids, Florida will open the first high-speed-rail line in the nation, from Orlando to Tampa, in 2015.