Accessibility links
It's Rude! It's Crude! It's Stupid! Just Sayin' Saying, "I'm just saying," puts a fire escape onto the end of a sentence. It lets you express a stern, even rude, opinion, but not really: You're just saying. It invites the listeners to discount what they've just heard, even as they're reeling from it.

This is the time of year when various authorities release lists of words, phrases and acronyms that have recently joined the English language: "BFF," "retweet," "unfriend" and "vuvuzela" made many current lists. I'm glad for all of them.

But there is one phrase that I hear most every day that I don't like at all: "I'm just saying."

Its origins are murky. Some people swear they heard it in an early Eddie Murphy routine. Others insist that it dates from Seinfeld episodes. In any case, the roots of the phrase seem to be sitcom, not Shakespeare -- I'm just saying. 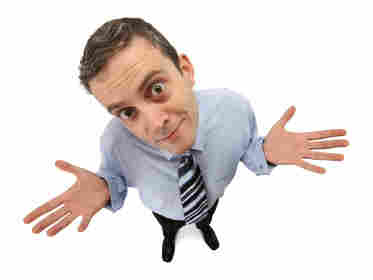 Each week, I get emails and messages that go something like, "You are witless, stupid and immoral, and I wouldn't let you near my tropical fish for fear you would contaminate them with your depravity. Just sayin'!"

Saying, "I'm just saying," puts a fire escape onto the end of a sentence. It lets you express a stern -- even rude -- opinion, but not really. You're just saying. It invites the listener to discount what we've just heard, even as we're reeling from it.

The Urban Dictionary website explains that the phrase makes it "possible to deliver a rude comment or burn and have it bounce off simply as an opinion disguised as an objective opinion, and who can argue with you over an opinion that you don't apparently support."

Imagine what the phrase might have done in earlier times.

What if Moses had told Pharaoh, "Let my people go! Just sayin'!"

What if Henny Youngman had said, "Take my wife -- I'm just saying."

What if FDR had tried to rally Americans out of depression by decreeing, "The only thing we have to fear is fear itself. I'm just sayin'!"

Or if Churchill had tried to rouse Britain in 1940 by declaring, "We shall fight them on the beaches, in the air, in the hills, and we shall never surrender -- I'm just saying."

What if Romeo had seen Juliet and gushed:

"See, how she leans her cheek upon her hand!
O that I were a glove upon that hand,
that I might touch that cheek! -- just saying."

I am glad that the English language gets enriched each year with new phrases. But "just saying" seems designed to let us express ourselves sharply, but without conviction. It's a way of being colorful without consequences -- all lip and no heart. Did we really need a new phrase to help us be more snide, snarky and insincere?

What if Stevie Wonder had sung, "You are the sunshine of my life -- just sayin'!" Some hit that would be.